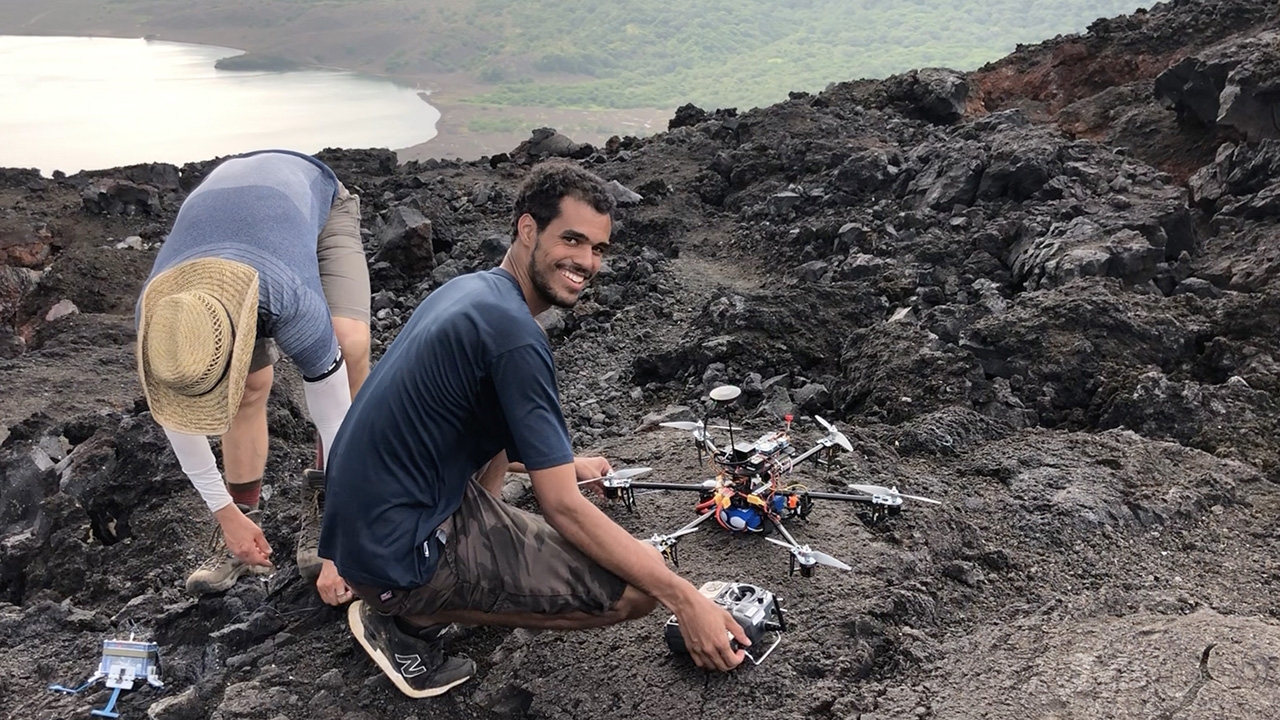 Professor Scott Nowicki (l.) and Department of Computer Science undergraduate Jarett Jones at the crater rim of Tavurvur Volcano in Papua New Guinea attaching a gas sensor pod to the drone that Jones helped design in May 2019.
Credit: Matthew Fricke 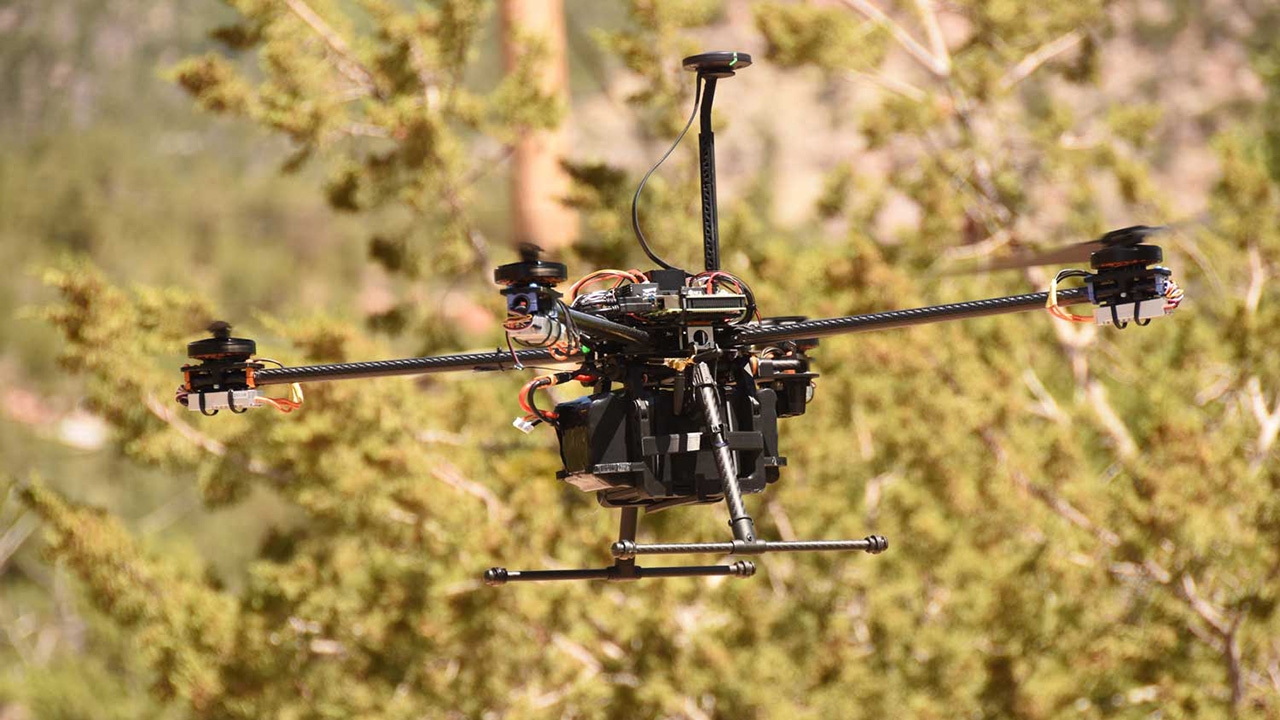 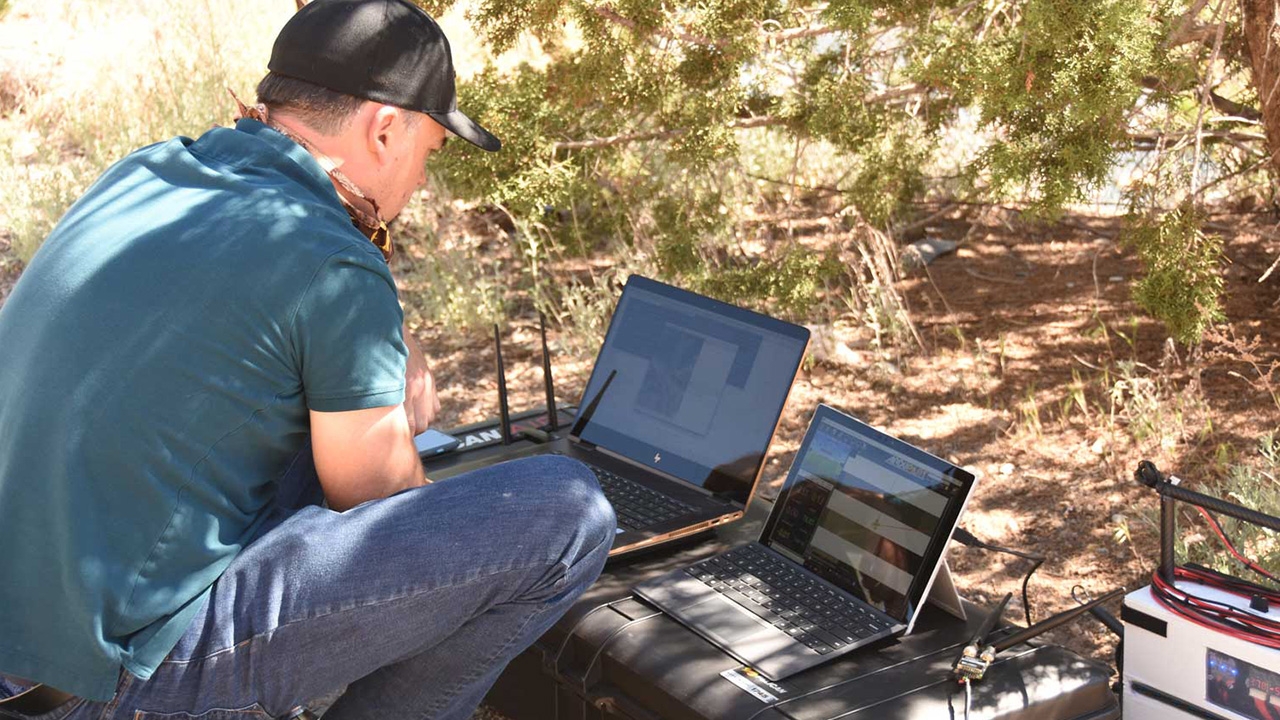 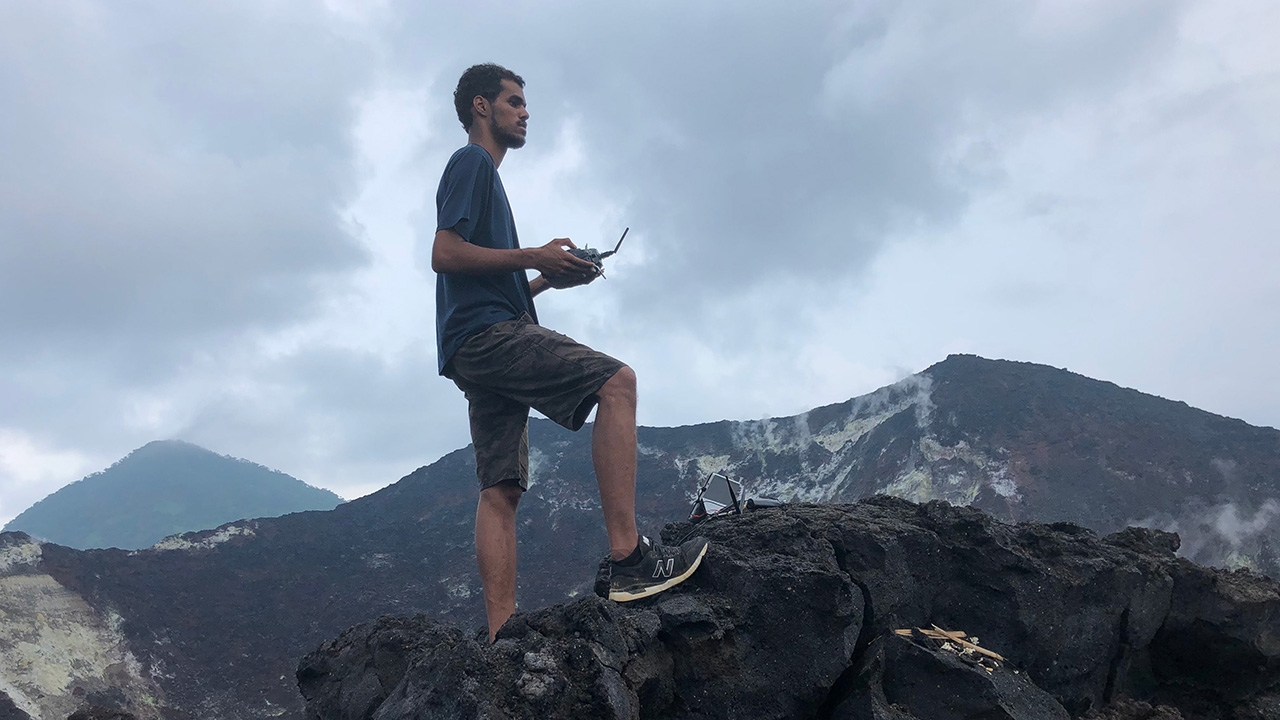 a drone into the crater of Tavurvur Volcano in Papua New Guinea to sample CO2 emissions in May 2019.
Credit: Matthew Fricke

One can tell a lot from the composition of the gasses coming from active volcanoes about what is happening deep beneath. It is even possible to predict when an active volcano will erupt causing widespread damage, yet gathering this critical data can be extremely hazardous to the scientists studying the volcano.

Now, with the help of a four-year, $1.5 million grant from the National Science Foundation (NSF), an interdisciplinary team from The UNM Departments of Computer Science (CS), Earth and Planetary Sciences (E&PS), and Electric and Computer Engineering (ECE) received the research grant from NSF’s National Robotics Initiative to develop novel bio-inspired software and drones to measure and sample volcanic gases.

“Our ultimate goal is to develop and test drone-platforms that enable scientists to collect data from active volcanoes that improve our understanding of volcanic processes and use that knowledge to forecast eruptions and save lives,” said Earth and Planetary Sciences Professor Tobias Fischer.

The team began this collaboration back in 2017 and participated in an international field expedition to the remote and dangerous volcanoes of Papua New Guinea sponsored by the Deep Carbon Observatory in the spring of 2019. During this expedition, UNM researchers Tobias Fischer, Scott Nowicki (E&PS), Matthew Fricke and undergraduate student Jarret Jones (CS) successfully sampled the plume of Tavurvur and Manam Volcanoes for carbon-isotopes, which provided information on the ultimate sources of carbon dioxide in these volcanoes. The results were recently published in the journal Science Advances.

Following the expedition, UNM computer scientist and Professor Melanie Moses led the team to a successful proposal for the National Robotics Initiative to program swarms of drones so they work together to map the gas concentrations around volcanoes and so discover the richest places to sample. The VolCAN project (Volcano Co-Robots with Adaptive Natural Algorithms) develops cooperative robots that work collaboratively as a team guided by scientists to sample in regions likely to have the most scientifically valuable data.

Adaptive natural algorithms are behaviors inspired by biology so that robots adapt in real-time to the challenging environments surrounding volcanoes. Drones that autonomously and collaboratively survey volcano gasses will allow small local monitoring stations to keep an eye on volcanoes, rather than having to rely on teams of drone pilots.

The highly interdisciplinary VolCAN team integrates theory, simulations and field experiments to design, build and test a robust VolCAN swarm. The computer science efforts are spearheaded by Moses, Fricke and Jarred Saia, experts in bio-inspired algorithms. Drone hardware development is led by Fricke who supervises Ph.D. student John Ericksen, and also by Professor Rafael Fierro and his team from ECE. Field testing, sensor development and science applications are led by Fischer and Nowicki. Biology Professor Dave Hanson will help the team expand the swarm to monitor plant ecosystem health in the final year of the project. The team also includes several undergraduate students, M.Sc. students and Ph.D. students who will work synergistically within the VolCAN project.

“Robots are capable of working in environments that would be deadly to humans,” said Fricke. “Interplanetary rovers are a well-known example, but there are places right here on Earth that are too dangerous for humans to investigate and volcanoes certainly qualify. We are interested in questions such as: how much do volcanoes contribute to climate change? What processes are at work in the Earth’s interior? What is the likelihood of a particular volcano erupting soon? We believe our team of robotic scientists will be able to shed light on these and other open questions.”

“With the recent advancement of low-cost drone hardware and sensors, we are finally at the point when we can build and fly drone swarms into some of the most hazardous places on the planet to gain insight that was never possible before,” added Scott.