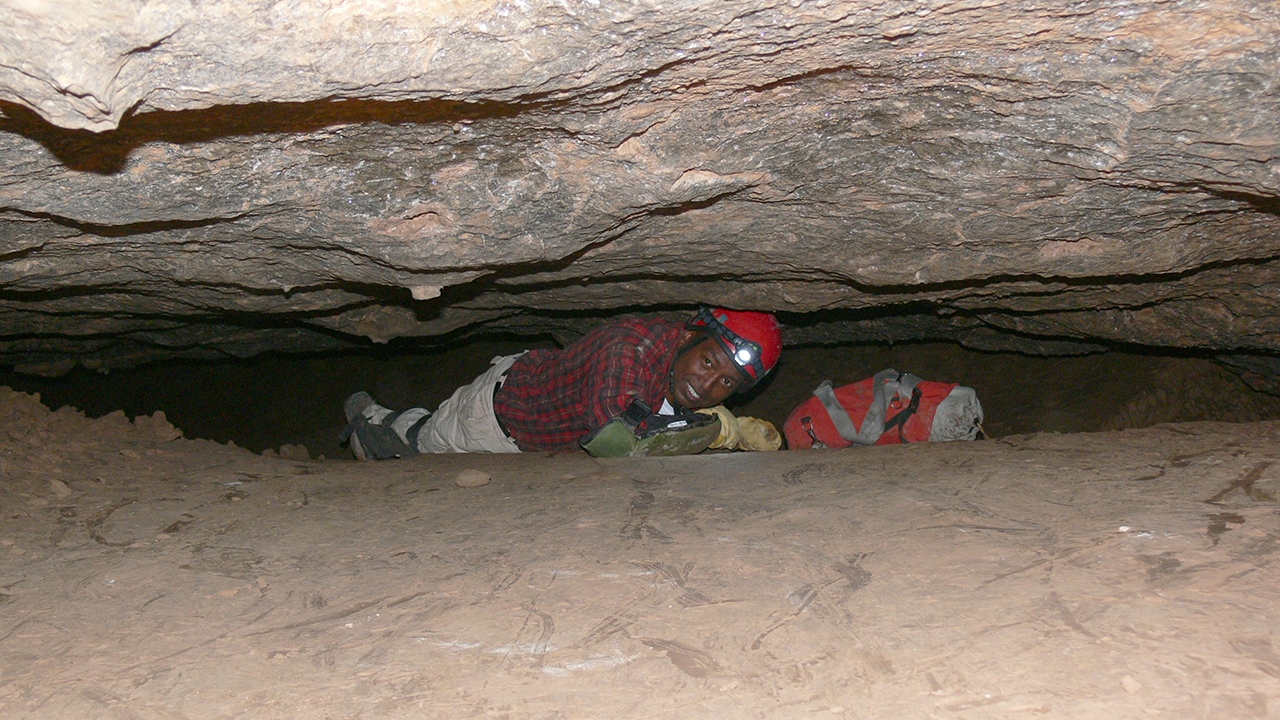 UNM Department of Earth and Planetary Sciences Professor Yemane Asmerom crawls on a cave floor in Ft. Stanton, N.M. in search of a sample stalagmite. 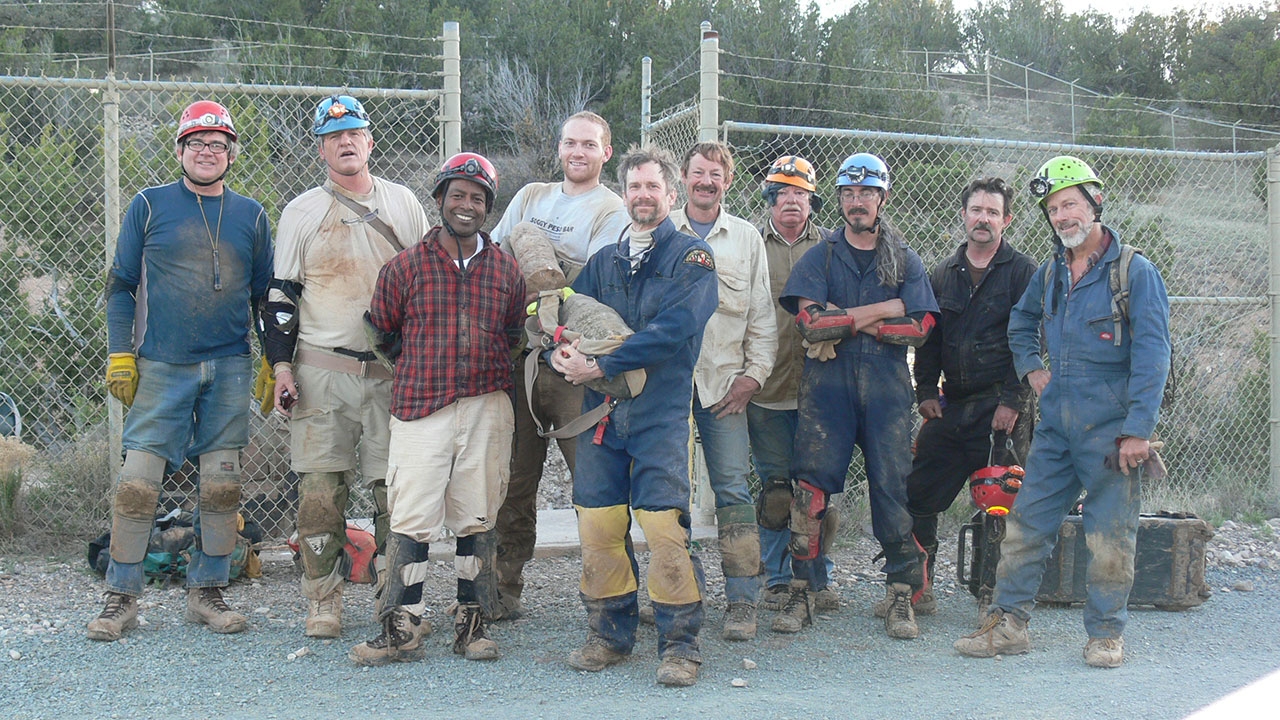 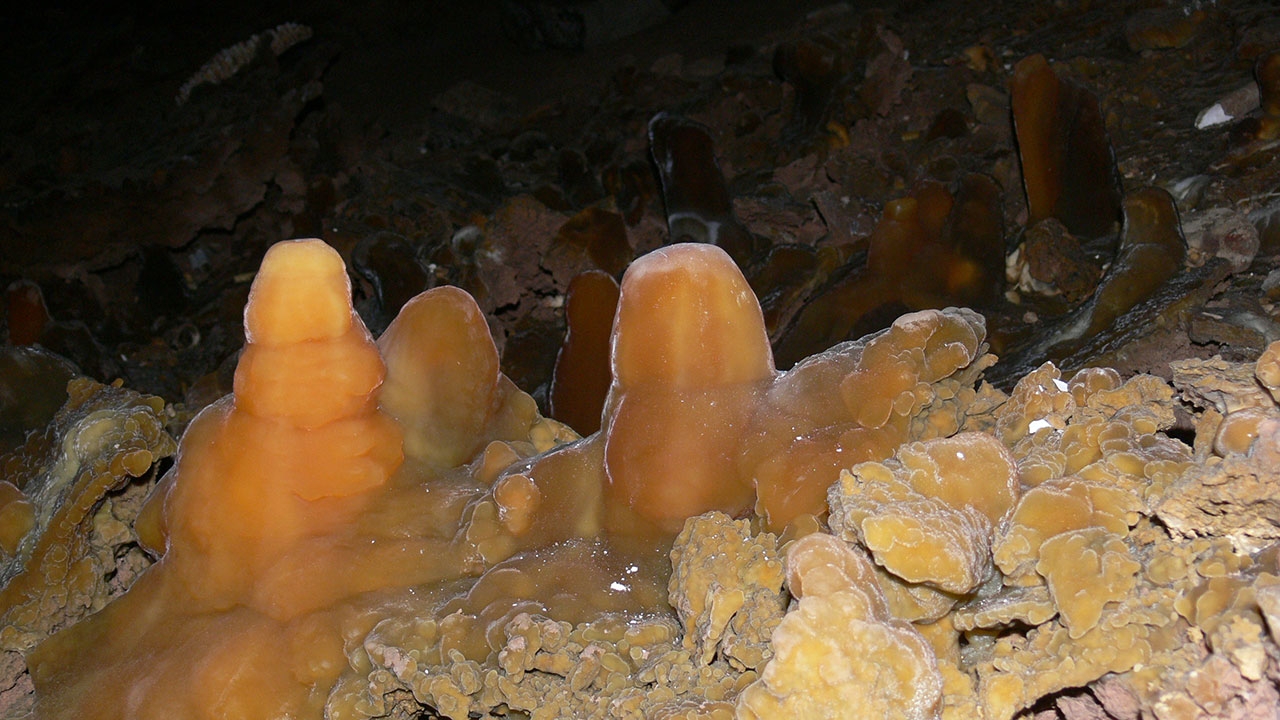 Stalagmites in a cave at Ft. Stanton (N.M.) glisten in their environment. 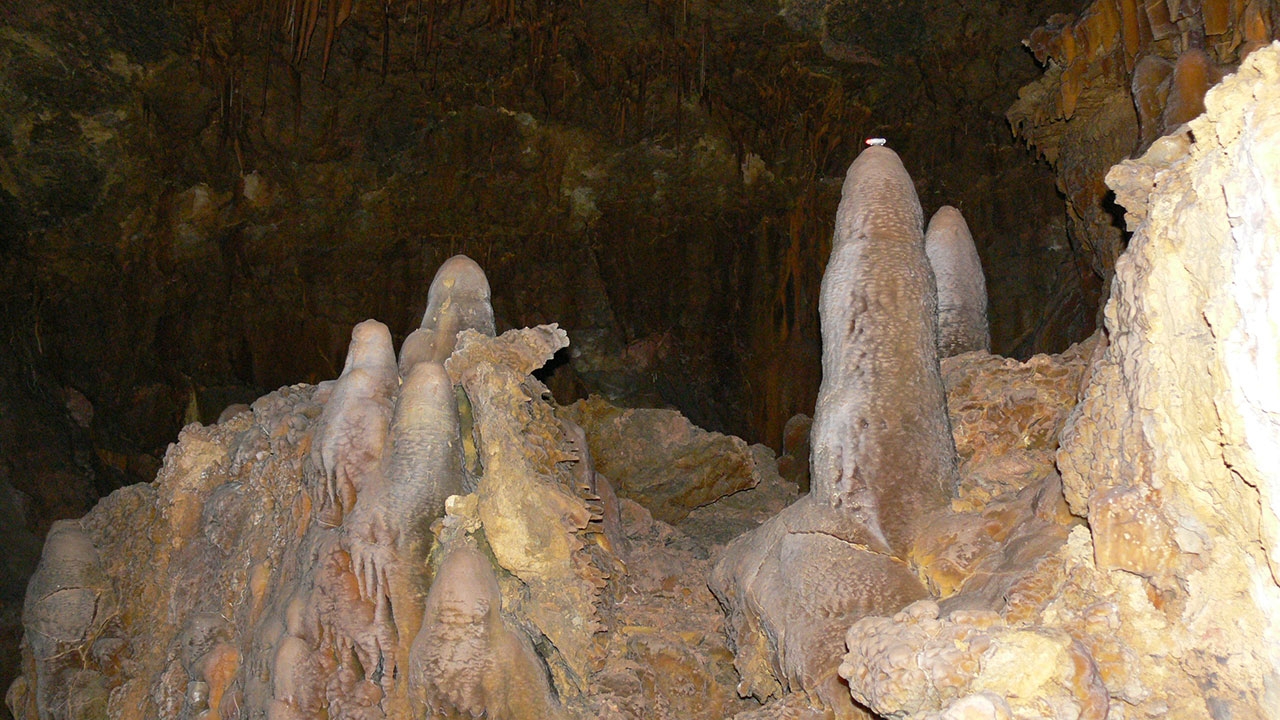 Stalagmites in a cave in Ft. Stanton, N.M. Scientists only gather broken samples to conduct their research.

Coming out of the last glacial period, there was a sudden climate reversal observed throughout the tropical and subtropical regions of the Earth. The cause of these changes during this interval so enigmatic, so much so, the interval was informally referred to as the “Mystery Interval.” Many large shifts in climates in the past seem to be synchronized with climate in the poles as expressed in ice core records.

For example, a number of years ago, a team led by UNM Department of Earth and Planetary Sciences Professor Yemane Asmerom showed, based on precisely-dated stalagmite data from Ft. Stanton, N.M., that changes observed in the poles were corrected with changes in the balance between summer and winter moisture in the Southwest. In contrast, the dramatic shifts during the “mystery interval.”

Unlike large climate shifts that seem to be synchronized with polar climate as recorded in ice cores, the changes observed during the Mystery Interval, such as what appears to be the collapse of the Asian monsoon, did not have corresponding expression in the Southern Hemisphere nor the Northern Hemisphere ice cores. In order to solve this mystery, Asmerom and collaborators, again turned to Ft. Stanton, in search of a sample that could give them even higher resolution data.

“It’s physically difficult work having to crawl on your knees on this ledge basically for a mile or longer before you can straighten up,” Asmerom recalled. They went in with large support from cavers and students and found a very large sample that they brought it back. “To our delight, it grew very fast, three times the growth rate of our previous sample from our research published in Nature Geoscience in 2010,” said Asmerom.

“To our delight, it grew very fast, three times the growth rate of our previous sample from our research published in Nature Geoscience in 2010,” said Asmerom.

The large growth is important because the number of years represented by a sample is your ultimate limit, no matter how precise your analysis is. As a result, it helps to have a sample with high growth rate. During that time the scientists, including UNM Sr. Research Scientist Victor Polyak, also made significant advances in their laboratory technique involving using the Neptune, a state-of-the-art multi-collector inductively coupled plasma mass spectrometer. This technological advance enabled them to conduct more precise dating because of large signal intensities, essentially increasing their precision by a factor of 10.

They also worked, in collaboration with colleagues at the University of Minnesota, on refining the half-lives of thorem-230 and uranium-234, which enabled them to publish more precise half-lives in 2013, which really helped really narrow the age uncertainties.

Combined, with a very clean, high uranium sample, Asmerom and Polyak were able to establish that ‘yes,’ this ‘new’ sample grew continuously for 40,000 years without a break, indicating a continuous drip. They concluded, after dating this sample, on average, the error on the edges was about 70 years, with 95 percent confidence.

Similar to their previous results, the 40,000-year record showed unprecedented match with the ice records from Greenland. “This is truly unprecedented,” Asmerom said. “In fact, the ice core scientists were amazed when they saw how precise we could date this sample. There is an absolutely beautiful one-to-one match and correspondence between the isotopic variations and our data, for the full period during what I call the Dansgaard-Oeschger (warming events) and also the Heinrich Stadial (cooling events).

In fact, their precision was so good that they compared it to some old marine isotope records from the North Atlantic and calibrated it using their new data. The result illustrated this match extremely well because this region is directly coupled with activity in the polar-regions. Since the polar jet stream basically moves further north or further south, depending on what the temperature contrast is between the poles and the equator. During warm intervals, the jet stream moves north towards the pole, decreasing winter moisture in the southwest, with the opposite pattern during cold intervals. These changes in seasonal balance of precipitation are reflected in the oxygen isotope composition in stalagmite, because winter moisture has lighter (lower 18O/16O ratio) than summer moisture.

The Greenland cold events are matched one-to-one with greater winter moisture in the Southwest, while warm (DO events) are associated with lower winter moisture and generally drier conditions. This is true throughout the record, except during the ECR.  The ECR event seems to be missing from the ice data from both polar regions.  Asmerom and collaborators set about to solve this climate anomaly. Using these data, in comparison with other stalagmite, ocean sediment and ice core data from around the globe, they conducted extensive data analysis.

They showed that this period of deglaciation, which they named “the Extrapolar Climate Reversal (ECR),” was characterized by significant changes in atmospheric carbon dioxide, which is attributed to upwelling in the Southern Ocean. They showed that there were coherent responses to these events around the tropics and subtropics around the globe. Unlike previous cold reversals, which are associated with increase moisture in the Southwest, the ECR seems to be associated with regional drought. This was corroborated by sediment core data from the ancient Lake Estancia, on the other side of the Monzano Mountains.

These new findings were recently published in a paper titled, “Extrapolar climate reversal during the last deglaciation,” in Nature’s Scientific Reports with Asmerom and Polyak, and UNLV Professor Matthew Lachniet as authors.

“Given the technical advancements we have made in my lab, coupled with having an ideal sample, resulted in solving a long-standing climate mystery,” Asmerom said. “Although this event occurred a long time ago, about 18,600 years ago to be exact, understanding these types of phenomenon, allow us to gain better understanding of climate dynamics. Future changes in climate require good instrumentation data and modeling effort. But they are not sufficient, given the complexity of the system.  Paleoclimate data, such as the one we just published, are crucial third axis to this effort.”