UNM robots to be featured on TV program

A crew from Xploration Station, a syndicated program for young adults that focuses on the fields of science, technology, engineering, and math (STEM), visited The University of New Mexico on July 7 to film a segment on student-built robots.

The crew spent time with Melanie Moses, associate professor of computer science, and several of her students who work with Swarmie robots. The robots, built in conjunction with NASA, operate autonomously and are programmed to communicate and interact as a collective swarm.

They will be featured on the “Nature Knows Best” segment of the program that will air in the fall, usually on Saturday mornings on Fox-affiliated stations.

Danni Washington, host for the program and a trained marine biologist, said the segment will focus on how the robots communicate with each other, with a goal of getting teenagers interested in STEM subjects.

Moses developed the idea of programming the Swarmies after studying the way ants interacted as they foraged for food. She said the robots are similar to the iAnts that she had previously built, but the robots are larger and have more power and battery life. Robots are programmed to use GPS, an onboard camera, and other sensors, to find chips with unique identifiers on the ground, then they are programmed to “fetch” the chip and return it to its starting place. 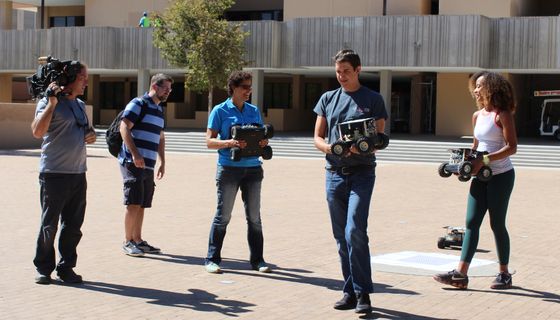 To build the robots, students developed algorithms in software and integrated their code into robotic platforms. One possible application would be space exploration, where robots could collect extraplanetary resources. Robots have to identify resources scattered across an arena and return them to a collection zone.

The UNM-NASA team built 60 robots, which participated this spring in the national Swarmathon challenge at Kennedy Space Center in Florida. Moses said her students will build about 30 more robots this year, as well as the next, and plan to distribute them to schools as learning tools.