The University of New Mexico has been dedicated to reducing energy consumption since the 1970s, and began its recycling program in the early ‘90s. Below is a list of UNM’s sustainability accomplishments for 2015.

UNM West campus unveils new solar array
UNM West went solar with an installation of a solar thermal storage system. The $465,000 project generates approximately 70 percent of the building’s electricity, and is expected to save the University more than $24,000 per year in electricity costs.

Center for Water and the Environment adds research focus
UNM Center for Water and the Environment grant will allow use of wastewater for agriculture. Civil Engineering Assistant Professor Ricardo Gonzalez-Pinzon and Associate Professor Andrew Schuler lead the research, which will explore how to expand the supply of water to agriculture through wastewater recycling and improved management decisions between wastewater treatment plants and water conservancy districts in arid regions.

PPD facilities engineer receives prestigious award
Don Swick, university facilities engineer with the Physical Plant Department, was awarded the 2015 Energy Engineer of the Year in Region IV by the Association of Energy Engineers (AEE). This award is described by the AEE for “those who exemplify the very best in their fields.”  Swick has been heavily involved in numerous innovative energy conservation projects that have resulted in significant energy cost savings for the university. In less than three years, Swick has managed seven major projects that have reduced energy consumption valued at $600,000 annually. 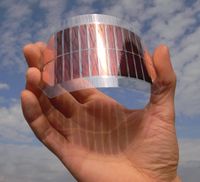 A solar cell is part of Yang Qin's research which is focused on creating affordable, renewable energy resources from organic photovoltaics (OPV’s).

UNM partners with Albuquerque's Emerging 2030 District
UNM partnered with Albuquerque’s Emerging 2030 District, a nationwide initiative formed to meet the urban sustainability standards set by the 2030 Challenge for Planning. It is a private sector-led effort utilizing collaboration, incentives, shared resources and public-private partnerships to promote the development of high-performance buildings and a healthier, livable city of the future.

UNM receives PNM Business Energy Efficiency Star award
The Public Service Company of New Mexico presented UNM with the 2015 Business Energy Efficiency Star in the Nonprofit/Government category. This award was based on UNM’s demonstration of energy efficiency on the types and/or volume of energy equipment rebate requests that were submitted through the PNM’s rebate program. PNM stated that UNM had submitted rebate requests of almost $100,000 in 2014 to set themselves apart from others in this category.

Monica Padilla is helping to find ways to use excess carbon dioxide.

Finding ways to use excess carbon dioxide
Chemical and Biomedical Engineering graduate student Monica Padilla worked with Research Professor Alexey Serov on ways to chemically convert carbon dioxide, a major greenhouse gas, into products that can be used in industrial processes. The idea is to capture carbon dioxide coming from electrical plants that burn coal or other fossil fuels and store it or use it immediately, thus reducing the amount of carbon dioxide emitted into the atmosphere.