Hoffman, who started his career at Northwestern University in 1967 where he remains today, is an American bioinorganic and physical chemist. His lecture titled, “How Nature Fertilizes the Earth: The Mechanism of Nitrogen Fixation by Nitrogenase,” will discuss the biological process, which involves one of the most challenging chemical transformations in biology, the cleavage of the N≡N triple bond, catalyzed by nitrogenases that are found only in certain classes of bacteria. 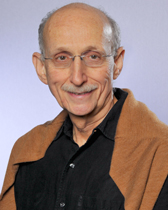 Despite decades of intensive study in many laboratories, and until quite recently, almost nothing was known about the mechanism of this process. Using electron-nuclear double-resonance (ENDOR) spectroscopy, Hoffman investigated many enzyme mechanisms. Subjects of this work include nitric oxide synthase, cytochrome P450, nickel-iron hydrogenase, and nitrogenase, the focus of this talk.

The source of all bioavailable nitrogen is atmospheric N2, which must be reduced to two NH3 molecules before it can be assimilated by any higher form of life. Even today, more than 100 years after the invention of the Haber-Bosch process for industrial generation of NH3 from N2, biological nitrogen fixation — the enzymatic reduction of N2 to two NH3 molecules — provides the nitrogen nutrient that supports more than half the human population, as well as the rest of the biosphere.

This talk will describe the mechanism Advanced Paramagnetic Resonance (EPR/ENDOR), which involves the photophysical, bioelectrochemical, enzymological and computational studies of intermediates formed during turnover of the enzyme and freeze-trapped by collaborating laboratories. This research has now revealed the central mechanistic steps by which both the Mo- and the alternative Fe- and V-dependent nitrogenases accumulate reducing equivalents and carry out the reduction of the N≡N triple bond. 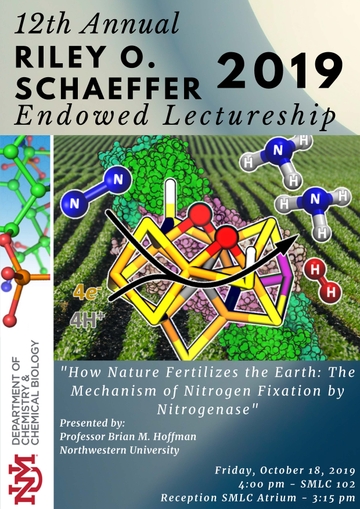 After a highly productive career at IU, including a stint as departmental chair (1967-1972), he accepted the position of dean of the College of Arts and Sciences at the University of Wyoming in 1976. He was recruited from that position to UNM where he served as Department of Chemistry chairperson from 1981-1987 and he retired from UNM in 1992.

Under his able leadership as department chair, Schaeffer guided the hiring and mentoring of a number of new faculty who have gone on to highly productive careers. He has also had a distinguished research record that includes critical discoveries in the synthesis, reactivity and structure analysis, via X-ray diffraction and NMR methods, of boron hydrides and carboranes.

Schaeffer, who died in April 2018, received numerous honors during his academic career including a Guggenheim Fellowship. He was also a AAAS Fellow and an Honorary Fellow of the Royal Society of Britain.