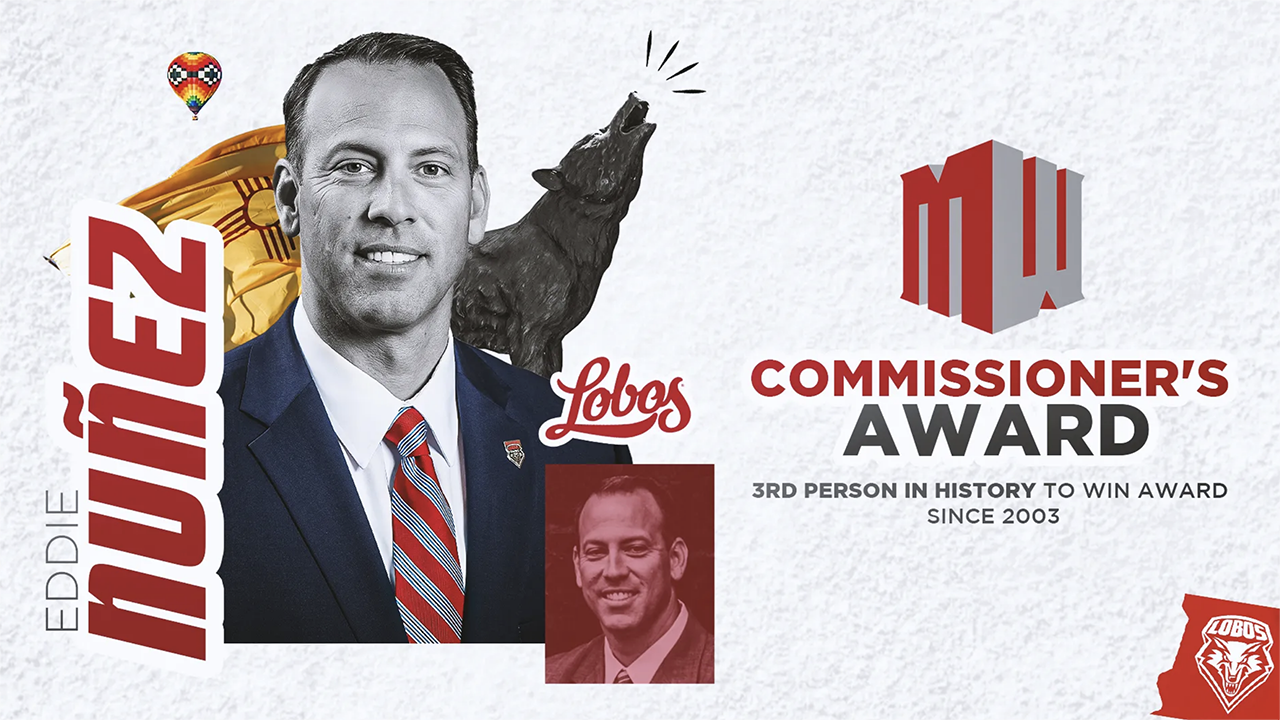 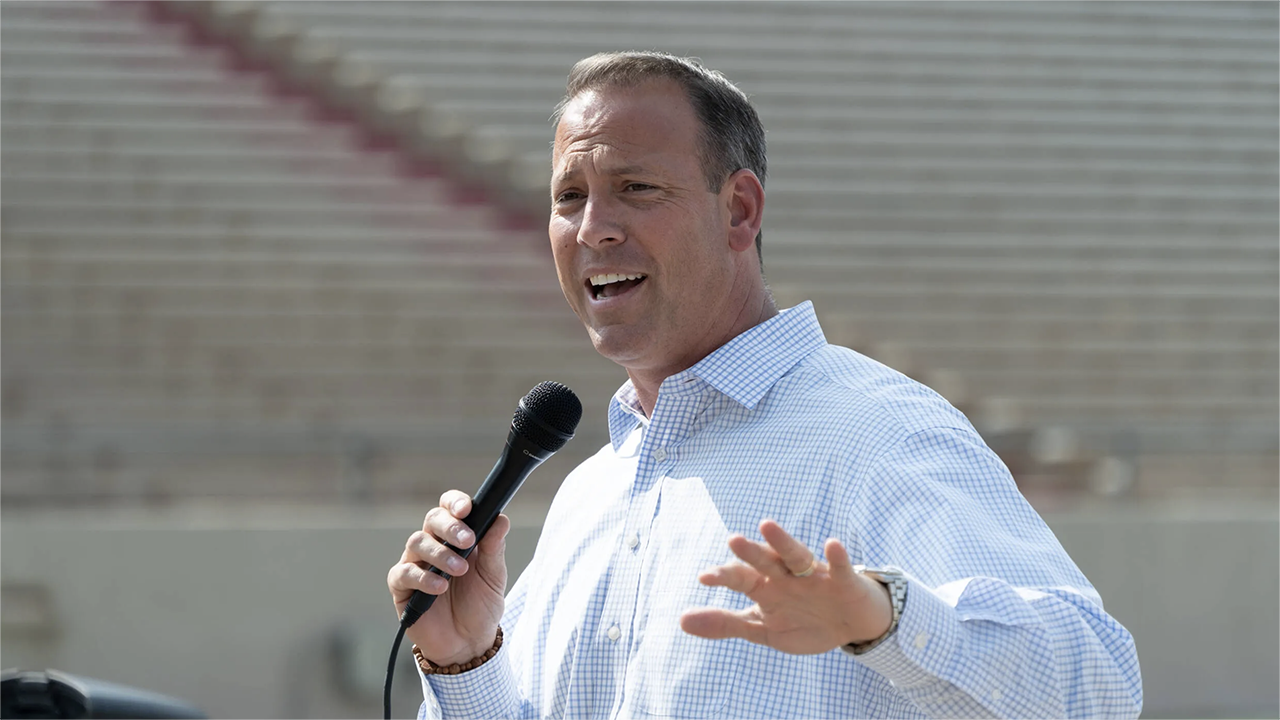 to supporters following the surprise announcement of the Commissioner's Award presented by the Mountain West. Nuñez is only the third-ever recipient of the prestigious award.
Credit: UNM Athletics 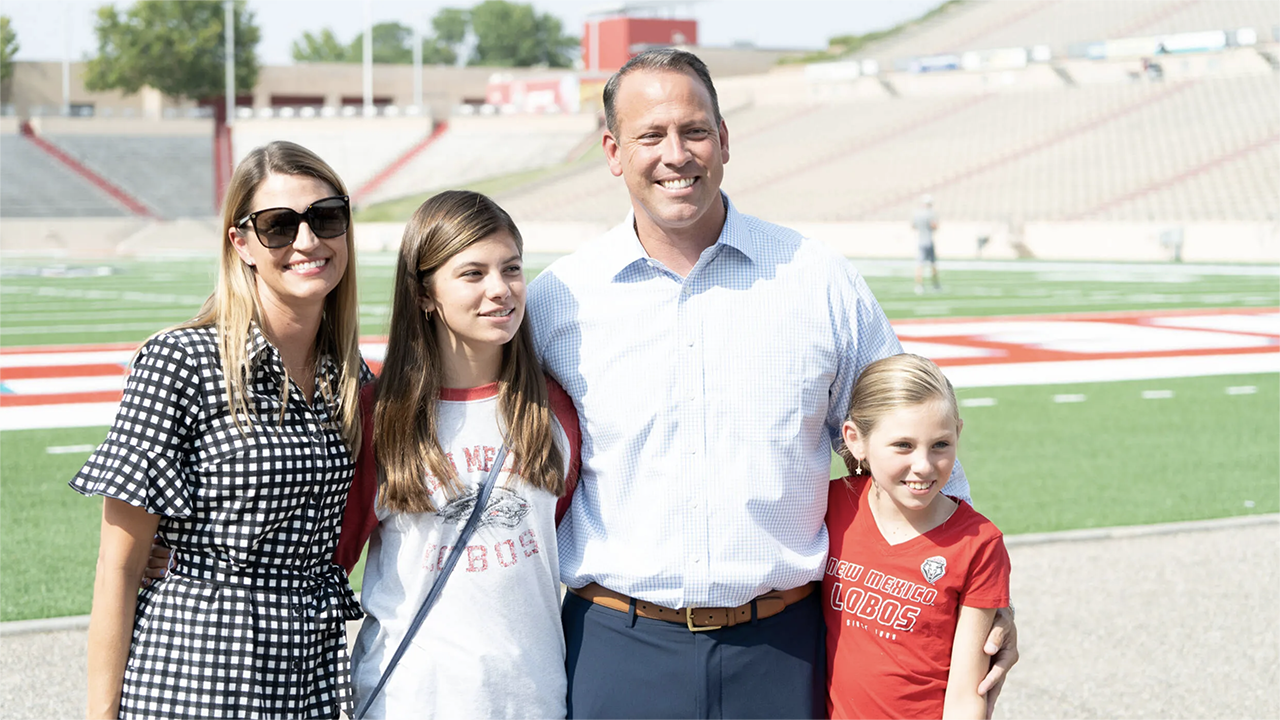 Eddie Nuñez, who guided the University of New Mexico Athletic Department through COVID challenges not faced by any other Division I institution, was named the winner of the 2020-21 Mountain West Commissioner’s Award. This marks just the third time the honor has ever been awarded in the 21-year history of the league, making it the highest of honors. It is also the first time anyone has been named a Commissioner’s Award recipient since 2007.

Nuñez, who is entering his fifth season at the helm of the Lobo Athletic Department learned of the announcement in a surprise gathering of staff and student-athletes as the announcement video was played at University Stadium. 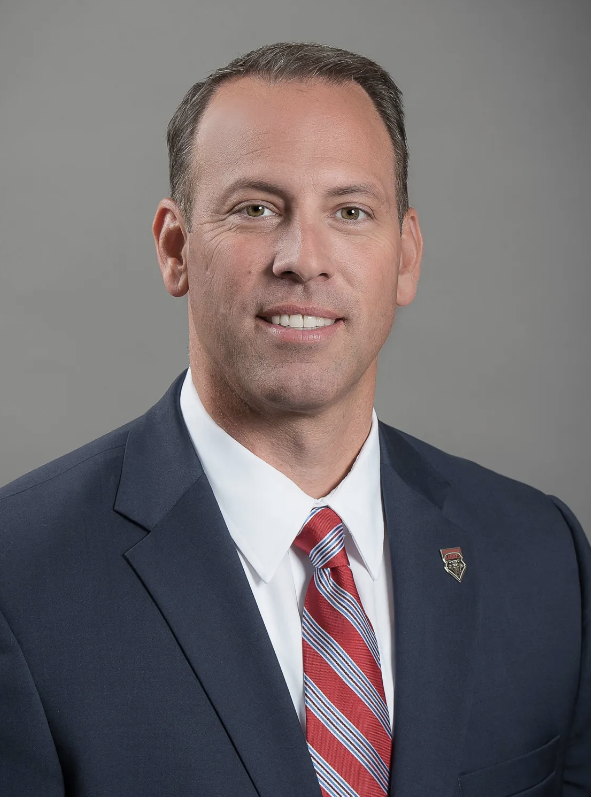 The Commissioner’s Award is presented to an individual who, through dedicated effort and service, has achieved a singularly distinguished accomplishment during the academic year that has significantly enhanced the Mountain West or a member institution.

“In his time at UNM, Eddie has demonstrated extraordinary leadership, especially in navigating Lobo Athletics through the COVID-19 pandemic,” said UNM President Garnett S. Stokes. “He is a true advocate for the well-being and success of our student-athletes and has garnered their respect and admiration, as well as that of our coaches, athletics staff, community, and colleagues across the country. I can think of no better individual to receive this prestigious award than Eddie Nuñez.”

Under Nuñez’ leadership and expert handling of the challenges faced by UNM’s athletic department, the Lobos not only successfully navigated the COVID-19 pandemic, but the department was able to make a positive impact on the state of New Mexico and the Albuquerque community while winning a league-high six Mountain West titles.

New Mexico’s football team became the first team in Division I history to ever play a complete season without a home game or a game within its state, as the 2020 Lobos shifted its base of operations to Las Vegas, Nev. There, the team played four road games and three “neutral” site games in Las Vegas. Through Nuñez’ creativity and contacts, the Lobo football team not only turned in a successful season that ended on a two-game winning streak, but the team didn’t record a single positive COVID case in well over 4,000 tests.

“I am so grateful for Eddie’s leadership through such an unprecedented and difficult time for our student-athletes,” said head football coach Danny Gonzales. “He was tireless in his efforts to make sure we had all of the tools to succeed as a program, from an academic standpoint to on-the-field as well. He allowed us to show the nation that it can be done, and he is very deserving of this honor.”

While the Lobo football team spent 43 days away from home, Nuñez also led the efforts to relocate the men’s and women’s basketball teams. The men’s team was on the road for over 100 days and saw itself headquartered at times in Texas, Utah and Colorado, while the women’s team was on the road for over 90 days, based mostly in Texas. The Lobo men’s team did not play a single game at home, and the women’s team was able to play just two make-up games to conclude the regular season at home.

The women’s basketball team won the program’s first outright regular-season title, one of six conference championships garnered by the Lobos. Women’s cross country, women’s soccer, women’s golf, men’s golf and men’s tennis all took home conference titles, and none of those teams were allowed to practice together until Feb. 1 due to state COVID regulations. Much like football, none of those five programs had a positive COVID case during its season.

UNM’s success wasn’t just limited to the playing fields. Under his leadership, UNM consistently gave back to the Albuquerque and New Mexico communities. Nuñez spearheaded departmental donations to the Lobo Food Bank, allowing access to food during the pandemic for students in need, and led a diaper and book drive for local children were unable to travel to school or daycare onsite during the pandemic.

Along with several department-wide PPE drives, Nuñez was UNM’s driving force in working the transform The Pit into a mass vaccination site. The Pit was the site of well over 100,000 COVID-19 vaccinations. The state of New Mexico has been recognized as a leader in vaccination rates, consistently ranking among the states with the highest percentage of its population vaccinated.