A large part of the next wave of Indigenous school principals will come from The University of New Mexico.

There’s a growing group of dedicated learners aiming for that goal, in the Promoting Our Leadership, Learning, and Empowering Nations (POLLEN) program housed in the College of Education and Human Sciences (COEHS).

This immersive, licensure program began in 2016 to put teachers on a direct pathway to higher leadership in Indigenous or Native-serving schools. It has since received roughly $750,000 in grant funding to secure the future of principals and learners.

It’s also the only one of its kind in the country, according to POLLEN Coordinator and Professor Shawn Secatero.

POLLEN is based around carefully selected core elements of Indigenous leadership. There are 16 well-being pillars in total, including things like language, spirituality, medicinal healing, and environmental well-being. Each of those has its own sub-strengths listed and required for mastery and balance for leaders.

“The four main pillars consist of spiritual, mental, physical, and social well-being. It’s a holistic framework that we use since all of those key elements have to be combined for balanced leadership and to serve our Native-serving schools,” Secatero said.

Students must also commit themselves to the heart and purpose of each community they serve in, in order to truly provide a dedicated service to their students, outside of the basic requirements of being a principal or school leader.

“We need more teachers that are going to be strongly committed to their community and schools by seeking a teacher-to-principal pathway,” he said.

This commitment includes not just the entirely indigenous-based curriculum, but two full years within a Native-serving school. That requires a strong immersion in the community itself and active efforts to give back to that community.

“You have to know the culture, the language, and a lot of ways to survive and to fit in. But the premise of our program is that we get students who really care.” – Professor Shawn Secatero 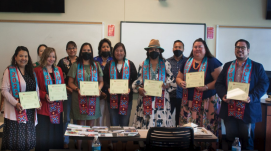 There are also certain adaptations to each community culture, depending on the area students learn in. Mentors regularly check in with future principals to ensure all ends are tied by the completion of their internships within the variety of Native-serving schools. Each classroom requires a unique perspective, as well.

“We acknowledge the strengths of every community that they offer,” Secatero said. “Whether it's language, culture– some communities have resources and some don't, but as a leader that’s the important foundation for building these schools. It is kind of like a ‘grow your own.’”

Secatero says he has found some incredible people in each of the six POLLEN cohorts so far. Fifty new principals have emerged so far. The licensure exam has a 98 percent success rate, and there has only been one withdrawal in the program’s six-year history.

Some graduates have gone on to also create policy with the New Mexico Public Education Department, or serve as superintendents.

“I really love my students,” he said. “They give me purpose for what I do, especially with the impact they're making.”

One student, an Elder of the Lakota Tribe in South Dakota, Edwina Brown Bull, is representative of the devoted types of students Secatero works with. She makes the nearly 12-hour drive to UNM multiple times per semester.

"The opportunity that the UNM POLLEN Program offers is truly remarkable," Brown Bull said. "My professors are from diverse backgrounds and offer accessibility to be successful. The courses are challenging, engaging, and unifying. The most beneficial factor for me as an indigenous student is the connections created through open discussions, and cross-cultural sharing as tribal nations."

It also has an undeniable impact in the Southwest. Seventy-five percent of POLLEN graduates remain in Indigenous schools in this part of the country, filling just part of that critical vacancy. The Navajo Nation has a dire need for principals especially.

Non-Indigenous learners can also be a part of POLLEN. Ten percent of its students make up that total so far.

"No matter who you are, no matter where you are from, you are fully embraced by POLLEN faculty and peers. So be brave to make a change. This is the best leadership program that shows care and inspires leaders," student Yi-Ling Lin said. 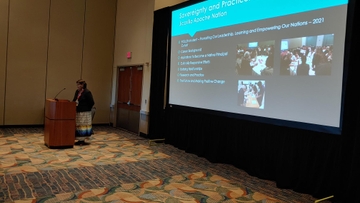 The Core POLLEN framework has received praise from researchers, instructors, and tribes nationwide. Four POLLEN students presented in October. at the National Indian Education Association Conference. Student  Dr. Loyola Bird as well, held a POLLEN workshop at the World Indigenous Peoples Conference in Australia, where only 43 workshops were accepted from the U.S.

Leaders will present again at the Lakota Nation Invitational in South Dakota and The Annual Striking Eagle Native American Invitational and Education Fair both in December at UNM. The more visibility, he says, the better for the future.

“It's very important because we need to be visible out there as role models and leaders so that other kids can see themselves in leadership positions when they go to college,” he said.

What’s next for such a critical program? Expansion.

Secatero says a master’s program has just begun, and a doctorate program is coming in summer 2024. Eventually he also aims to implement opportunities for undergraduates as well, not just in the Southwest, but additional states with Indigenous populations like Oklahoma.

Five students are graduating this December.

Their unwavering commitment, Secatero added, creates something truly powerful and beautiful within the walls of schools.

“At least half of our students are fluent in the Diné language,” he said. “But they also share their life ways and epistemology with the students, so those who are non-Diné that go into our schools become well versed in our norms, practices, things like that.”

Learn more about the POLLEN program, as well as the COEHS’s Indigenous teacher licensure program right now on their website. Applications for the next cohort will open soon.