The University of New Mexico Department of Music will say farewell to Keith Lemmons after 33 years at the university.

As part of Lemmon’s farewell, the Department of Music Artists Faculty Ensemble-in-Residence, the New Mexico Winds, presents a farewell recital with Lemmons on Wednesday, Apr. 12 at 7:30 p.m. in Keller Hall, located in the UNM Center for the Arts.

Tickets are available at unmtickets.com.

Lemmons came to UNM in 1984 to teach clarinet and saxophone after working at Minnesota State University-Moorhead. He currently serves as associate dean of the College of Fine Arts. He is also a Presidential Teaching Fellow, Professor of Clarinet and Music Faculty advisor at UNM.

“I had previously taught at three small universities before arriving at UNM and found the quality of my undergraduate and graduate students were exceptional,” Lemmons said. “During my 33 years at UNM, the music school has attracted more and more graduate students. I have been most fortunate to have taught a wealth of gifted students that are just as talented as any university music student in the United States.” 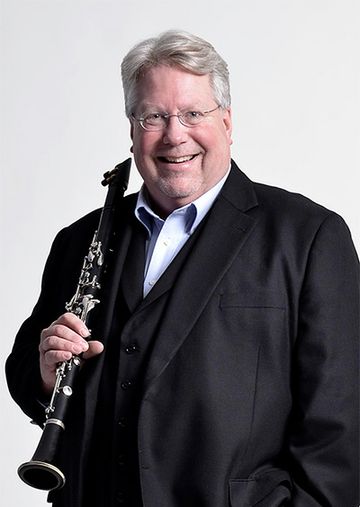 During his tenure at UNM, Keith Lemmons has received the UNM Teacher of the Year Award and the Burlington Northern Award for Faculty Achievement.

During his tenure at UNM, Lemmons has also received the UNM Teacher of the Year Award and the Burlington Northern Award for Faculty Achievement.

Lemmons combines a unique international reputation as a sought after soloist, clinician, chamber and orchestral musician with a distinguished teaching career. He has appeared at prestigious music and clarinet festivals, symposiums and universities around the world, and throughout the United States. He has been enthusiastically acclaimed by critics and audiences alike for his performances in orchestra, chamber music and solo recital appearances.

As a performer, Lemmons plays with many local groups such as the Serenata of Santa Fe, the Taos Chamber Music Group, and the Montage Society. Lemmons voiced his concern for local classical music artists saying, “Albuquerque is a vibrant place. Unfortunately, the classical music scene [the NM Symphony, NM Philharmonic, etc.] have all struggled. It is tragic that the financial support continues to be so difficult.”

He considers both, teaching and performing, equally rewarding. “I love teaching students of varying levels and then see the fruits of their labors,” he said. “Students keep me on my toes and I think also keep me young. I am still learning from each of them. Performing and collaborating brings joy and fulfillment to my soul. It is a lot of effort and practice but it is has always been a necessary constant in my life.”

Lemmons also expressed his appreciation for the Music Department, crediting the faculty and students for making the department exceptional. He also spoke about the strengths of Music Department, including its international and nationally known faculty, as well as its education programs.

“Each faculty member is distinguished as an educator and performer.,” Lemmons said. “The bands, orchestra, and choirs are recognized and acclaimed nationally. This is a credit to the quality of students at UNM and the faculty. The music performance and music education programs are also acclaimed both at the undergraduate and graduate level.”

In addition to his love for the university music department, Lemmons said that his favorite venue is Popejoy Hall.

When asked about advice he would give to aspiring musicians, Lemmons imparted his wisdom saying, “Practice, practice, practice. Make yourself competitive. Play more than one instrument, become an entrepreneur, market yourself correctly, and never give up hope.”