The University of New Mexico School of Architecture & Planning celebrates the work of José Rivera, professor in community and regional planning, on Friday, April 22 from 5:30 to 7:30 p.m. in the George Pearl Hall Gallery. A reception follows the program. The event is free and open to the public.

Rivera’s presentation, “Water & Culture,” explores his work which has resulted in books, articles and awards. In 2014, Rivera received the first ever Acequia Scholar Award from the New Mexico Acequia Association. When he received the award, he said, “For most of my academic career at UNM, I have studied the acequias of the upper Rio Grande and comparative water institutions in arid lands around the world." 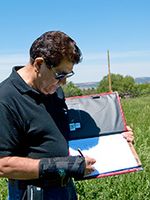 Rivera, who has more than 30 years of research under his belt, is the author of Acequia Culture: Water, Land, and Community in the Southwest, a 1998 UNM Press publication. In the book he presents the contemporary case for the value of acequias and the communities they nurture in the river valleys of southern Colorado and New Mexico. Recognizing that “water is the lifeblood of the community,” he delineates an acequia culture based on a reciprocal relationship between irrigation and community. “The acequia experience grows out of a conservation ethic and a tradition of sharing that should be recognized and preserved in an age of increasing competition for scarce water resources,” he wrote.

Rivera holds a doctorate in social policy from Brandeis University, and masters in both social welfare, also from Brandeis, and in English literature from the University of Arizona. He has served as full professor in both the School of Public Administration as well as the School of Architecture & Planning. He served as director of the UNM Southwest Hispanic Research Institute and as special assistant to the provost and vice president for research. Rivera assumed an advisory role for the UNM School of Law Utton Transboundary Resources Center, and as faculty associate with the water resources program.