The University of New Mexico School of Law celebrates the closing reception featuring Emeritus Professor of Law Sherri Burr’s exhibition of '400 Years of Freedom, Restrictions, and Survival,' on Wednesday, Oct. 23 from 5 to 7 p.m. at the African American Performing Arts Center Foundation. The exhibit commemorates the first arrival of Africans in August 1619 and challenging traditional notions of how slavery developed in this country. 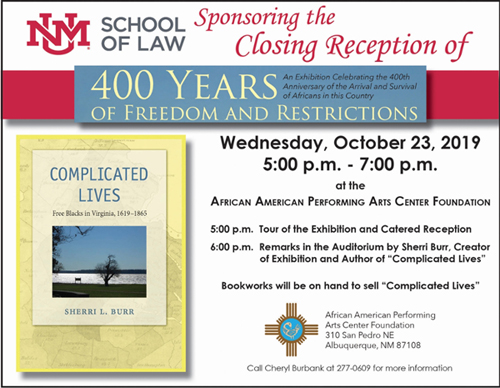 The installation, and Burr’s new book (Carolina Academic Press) Complicated Lives: Free Blacks in Virginia, 1619–1865, which redefines the history of slavery in the United States, have received widely ranging media coverage across the country, as well as, internationally. Burr, new book, and art installation garnered national and international attention.

Burr’s six-year research project, combined with DNA testing, has uncovered she is a descendant of Aaron Burr, one of the earliest vice presidents of the United States, and the opponent of Alexander Hamilton in their historically well-known duel. Her work has been recognized by the Aaron Burr Association, as her connection to Aaron Burr traces back to John Pierre Burr, of Philadelphia.

Burr’s work, conducted in archives, historical sites and societies, and libraries throughout the United States and in two foreign countries, will also inform an additional forthcoming book. Her completed works have garnered national and international attention and praise from CNN to NPR to The Guardian to the Washington Post.

Burr says, “I have been stunned by this attention to my work. Usually, I research a subject, write and publish the results, and maybe do a few promotional events. I never anticipated there would be this kind of reaction to getting the paternity of John Pierre Burr and his dedication to eliminating slavery formally recognized.”

For more information about the “400 Years of Freedom, Restrictions, and Survival” exhibit, visit the African American Performing Arts Center.

The exhibit continues through Saturday, Oct. 26 at the Center located at 310 San Pedro, NE in Albuquerque.