University of New Mexico Emeritus Professor of Law Gloria Valencia-Weber was recently sworn in as one of 11 members of the Board of Directors for Legal Services Corporation, the single largest provider of civil legal aid for the poor in the nation.

The federally funded civil aid program for low income persons was created by Congress in 1974. It distributes more than 95 percent of its total funding to 132 independent nonprofit legal aid programs with 918 offices that provide legal assistance to low income individuals and families in every state, the District of Columbia, and U.S. territories. 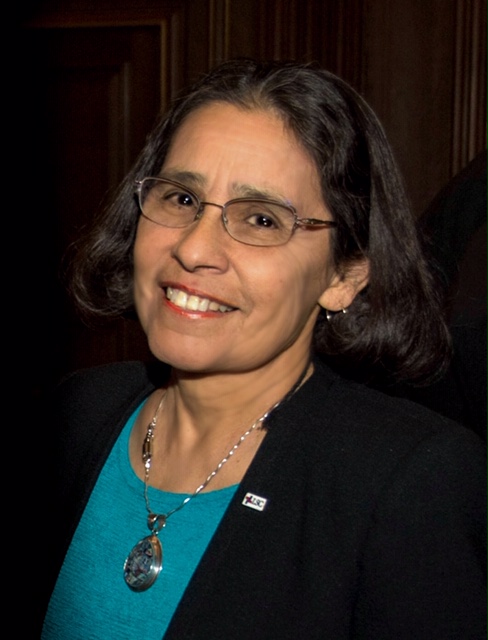 A retained appointee, Valencia-Weber was sworn in as director along with 10 others by Chief Justice John Roberts last year. The 11-member Board of Directors are appointed by the President and confirmed by the Senate. By law, the board is bipartisan: no more than six members may be of the same political party. Valencia-Weber was originally appointed by President Barack Obama in 2010, and was one of six selected for reappointment.

"It is an honor to do LSC work. Legal aid for low income Americans delivers the constitutional promise of equality in the justice system. LSC Directors visit communities throughout our country. Justice is made real for those who get legal aid help with serious problems that disrupt lives, such as protective orders in domestic violence, prevention of home foreclosures and evictions, and appeals for veterans denied promised benefits," said Valencia-Weber.

Valencia-Weber has a strong record of enabling poor people to obtain necessary legal services, especially for American Indians/Native Americans. The lawyers (American Indian and non-Indian) that she trains serve public interests, including the 25 Legal Services Corporation units that specialize in Indian law. She has been inducted into the American Law Institute for her work with American Indians / Native Americans.

Honors include being elected as a Fellow of the American Bar Foundation that recognizes exemplary dedication to the highest principles of the legal profession and commitment to the welfare of society. The Foundation, established by the American Bar Association, supports research in critical issues in law.

Previously, she served on the Board of the Oklahoma Indian Legal Services (1991-92) and she regularly instructs in continuing education for Indian law attorneys and for tribal government officials and tribal court judges. Moreover, her scholarly research in Indian law covers critical areas including tribal courts, domestic violence, and the constitutional interface of tribal, federal and state authority.

In 1990, she established the Indian Law Certificate programs, a first at the University of Tulsa College of Law in 1990, and since 1992 at the UNM School of Law. She is a pioneer having designed curriculum anchored in the unique law of the political relationship between the 573 federally recognized tribes and the U.S. She serves as a judge on the Southwest Intertribal Court of Appeals, of the American Indian Law Center, that serves tribes in four states.

Recently, Valencia-Weber was recognized by Oklahoma State University (OSU) Department of Psychology Scholarship Established as Honor for her design and development of the Diversified Students Program, 1976-1983. This program recruited, trained, and graduated students from among groups underrepresented in Master’s and Ph.D. psychology professionals. Besides students from minority populations, the program also trained students who were ADA qualified.

This program continues to succeed and leads nationally in the training of Native Americans as professional psychologists. The Psychology Department’s goal is to develop scholarships for undergraduates and graduate students. The first Scholarship award takes place at Department’s Research Conference, March 27, 2020.

Valencia-Weber graduated from Harvard Law School in 1986 where she was comments editor for the Harvard Civil Rights-Civil Liberties Law Review and a C. Clyde Ferguson International Human Rights Fellow. Then she clerked for Judge Lee R. West, Federal District Court for the Western District of Oklahoma, and Judge William J. Holloway, Jr., then chief judge of the Tenth Circuit Court of Appeals.