Law students and faculty at The University of New Mexico participated in a U.S. Supreme Court case regarding people with mental disabilities that came to a close earlier in November.  On Nov. 6, at the direction of the United States Supreme Court, the Texas Court of Criminal Appeals commuted Bobby Moore’s death sentence to life in prison.  The U.S. Supreme Court found that Moore’s claim of intellectual disability (ID), the condition previously called mental retardation, is clinically valid.

The UNM School of Law has a long history of supporting disability rights.  Students and faculty have worked on U.S. Supreme Court cases involving the rights of people with disabilities, particularly mental disabilities, since 1984.  Over 30 student teams to date have had the chance to participate in Supreme Court litigation, and many students have had the chance to see the Court discuss a case on which they worked.

Six students assisted UNM School of Law faculty as they participated in the U.S. Supreme Court’s proceedings by filing an amicus curiae (Friend of the Court) brief on behalf of The American Association on Intellectual and Developmental Disabilities and The Arc of the United States.  Distinguished Professor Emeritus Jim Ellis, Staff Attorney Ann Delpha, and Professors Carol Suzuki, Steven Homer, David J. Stout and April Land served as counsel on the brief. 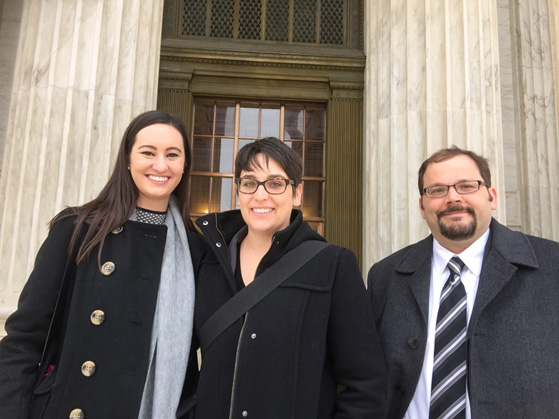 Noelle Sauer, Sarah (Nelle) Bauer and Ben Jacobs after their frosty morning in line on the steps of the Supreme Court.

This brief is one in a succession of U.S. Supreme Court filings by Professor Ellis, who argued Atkins v. Virginia in 2002, the case that established the categorical exemption to the death penalty for people with intellectual disability.  The Moore brief explained that there is a clear scientific consensus on the criteria and methods to diagnose intellectual disability, and also explained that stereotypes about people with ID can interfere with making a valid finding of the condition.

Supervised by the faculty, the student team was directly involved in every step of the preparation and filing of the brief.  Sarah (Nelle) Bauer (2018), Laura Callanan (2017), David Domingos (2018), Benjamin Jacobs (2017), Keri Rezac Thiel (2018) and Noelle Sauer (2018) conducted legal research, reviewed psychological research, and research regarding the Supreme Court’s filing rules and formatting requirements.  They also helped with editing, formatting and, of course, substantive and stylistic citation checking (Bluebooking).

Three of the students – Bauer, Jacobs and Sauer–went to Washington, D.C., with several faculty members to see the oral arguments, having spent the early-morning hours in line huddled in line in the November chill waiting for the Court’s doors to open.  After the arguments, the team received a tour of the Court, including the library and an after-argument view of the courtroom. 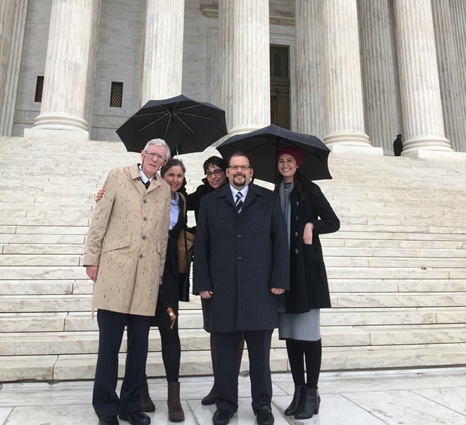 The case was first decided by the Supreme Court in March of 2017, when the Court unanimously decided that Texas’s rules for diagnosis were legally indefensible, and a majority of the Court joined with Justice Ruth Bader Ginsburg in requiring the use of the scientific consensus in diagnosing intellectual disability.  Justice Ginsburg directly cited and quoted UNM’s brief twice, and used the information provided in it throughout the structure of her opinion.