A team of researchers led by scientists at The University of New Mexico have been awarded a $7.5 million grant to expand on existing laser projects already underway at the University. 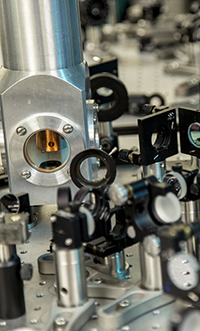 “We’re very excited about this award,” said Sheik-Bahae, who is also the project’s principal investigator. “This funding provides a chance for us to expand on already existing research efforts and provides an opportunity for more students to work on research science.”

“These types of interdisciplinary projects are very beneficial for the University and our students,” added Mafi. “It exposes them to science they may not otherwise get to work on and gives faculty the chance to collaborate.”

The project, Multidisciplinary Approaches to Radiation Balanced Lasers (MARBLE): Rare-Earths and Semiconductors in Disks, Fibers, and Microstructures, will focus on basic research to develop athermal lasers in semiconductors and fiber optics for potential use in a variety of applications.

“In the past, these athermal lasers have been demonstrated in certain cylindrical rod-lasers,” said Sheik-Bahae. “But, no one has ever produced them in fiber or semiconductor lasers, which is what our research team will undertake as part of the MARBLE project.”

Athermal lasers, also called radiation balanced lasers (RBL), are unique in that they do not generate internal heat like most existing lasers being used today. Eliminating that internal heat production would mark a major milestone in laser physics and thermal photonics, and allow for the creation of lasers with higher beam quality and consistency.

“The heat that is often generated in typical laser mediums—whether they’re crystals or semiconductors—tend to distort the laser beam spatially,” Sheik-Bahae said. “That distortion prevents you from focusing that beam very tightly whether you want to do machining, or sensing or whatever application you’re working with.” 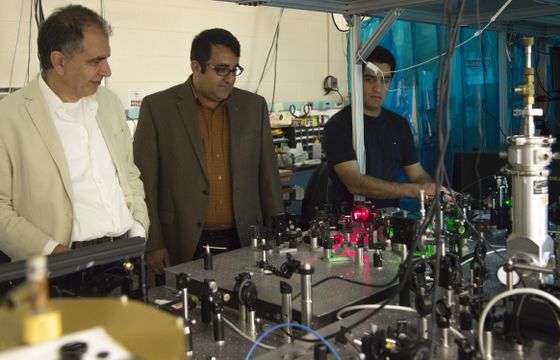 Markus Hehlen, a scientist in the Materials Science & Technology division at Los Alamos National Lab, will also participate. Hehlen, who is also a research professor with UNM’s Department of Physics and Astronomy, is part of the New Mexico Consortium, a non-profit corporation created to foster collaboration between local national laboratories and the state’s leading universities.

This year, the DoD issued 23 MURI awards totaling $162 million. The program is aimed at supporting research by teams of investigators from more than one traditional science and engineering discipline while providing support for the education and training of graduate students in cutting-edge fields.

In all, according to a DoD news article, 88 proposals were submitted for funding. UNM researchers said along with their proposal that tackles unanswered RBL questions, it’s the Universities reputation in the optical science field and existing focus on interdisciplinary research that set them apart. 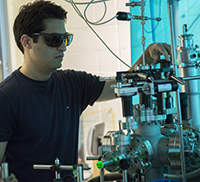 “Our Optics Program here always plays an important role in our proposals,” said Sheik-Bahae. “We have a very successful Optical Science & Engineering (OSE) Program and that plays a role in these projects we’re able to get funding for.”

The optics program at The University of New Mexico has been around since the 1980s and is one of the oldest and most successful in the nation. Today, OSE is affiliated with separate departments in multiple schools/colleges, which means students are naturally exposed to multiple disciplines.

“It’s that interdisciplinary work that really sets us apart from many other universities in the U.S.,” said Mafi.

He said OSE graduate students conduct research at facilities in the Department of Physics and Astronomy (College of Arts and Sciences), Department of Electrical and Computer Engineering (School of Engineering), and at UNM’s Center for High Technology Materials.

“I think our optics program is one of the most successful interdisciplinary programs at UNM,” said Sheik-Bahae. “We have 60-70 Ph.D. students, 34 faculty members from many departments, and a lot of cutting-edge research.”

And now, with this MURI award, even more students will get the chance work outside their usual field of study. Something both Sheik-Bahae and Mafi believe gives UNM students a leg up after graduation.