Defense systems against pathogens are a critical life-support system of fish that helps protect against infection. A complex network of immune cells and molecules that are located at the interface between the environment and the host, the mucosal immune system of vertebrates, such as fish, is the first line of defense against life-threatening pathogens.

Among vertebrates, fish are renown for being chief producers of massive amounts of mucus that protect every part of their body against infection. Vertebrate’s immune systems in fish are constantly evolving in order to best protect each species against the pathogens they are likely to encounter in their various environments.

One of the most remarkable innovations of the vertebrate adaptive immune system is the progressive organization of the lymphoid tissues that reaches the highest level of complexity in birds and mammals. Examples include our tonsils and lymph nodes, where increased efficiency of immune surveillance and cell interactions occurs which, in turn, aids in the elimination of bacteria or viruses.

In a new research paper titled, “African lungfish reveal the evolutionary origins of organized mucosal lymphoid tissue in vertebrates,” and published in Current Biology, scientists at the University of New Mexico detail groundbreaking research that reveals the forerunners of structures such as tonsils and Peyer’s Patches already appeared in the closest group of all tetrapods, the African lungfish (Protopterus dolloi and Protopterus annectens).

Lungfish are freshwater sarcopterygian fish that belong to the subclass Dipnoi. They can be found in Australia, Africa and South America. Lungfish are unique because they breathe with structures like lungs as well as gills. More importantly, lungfish represent the transition of vertebrates when they left aquatic environment and conquered the land. Thus, lungfish offer tremendous opportunities for the understanding of the evolution of immune systems in vertebrates.

In this work, Postdoctoral Researcher Luca Tacchi (et al) found for the first time primitive semi-organized lymphoid nodules or aggregates in the nasal and intestinal mucosa of African lungfish. Similar structures had been described over 40 years ago in amphibians but never in a non-four-legged vertebrate species. 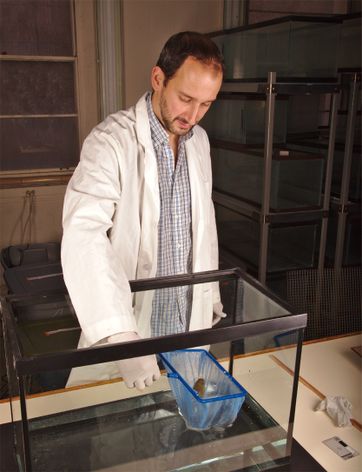 Postdoctoral Researcher Luca Tacchi found primitive semi-organized lymphoid nodules or aggregates in the nasal and intestinal mucosa of African lungfish. Similar structures had been described over 40 years ago in amphibians but never in a non-four-legged vertebrate species.

The finding of these structures in African lungfish therefore means that organized secondary mucosal lymphoid tissues, or O-MALT, is not 250 million years old but a lot older. This study indicates that O-MALT emergence predates the origin of four-legged vertebrates (tetrapods) and first appeared about 410 million years ago.

“We show for the first time the presence of organized lymphoid structures in the nasal and intestinal mucosa of the African lungfish, an extant representative of the closest ancestral lineage to all tetrapods,” said Assistant Professor Irene Salinas at the Center for Evolutionary and Theoretical Immunology (CETI), which is part of the UNM Department of Biology.

“Lungfish lymphoid aggregates are present in every lungfish we examined, including two different African lungfish species. The aggregates consist of lymphocyte rich structures associated with a modified covering epithelium that are able to trap bacteria present in the nasal cavity,” she added.

But why were lungfish (and not teleost fish) able to form these lymphocyte structures? The key to this question appears to be the role of a group of immune molecules called the tumor necrosis factor superfamily (TNFSF) members.

Using deep sequencing of different lungfish immune tissues, UNM scientists identified many new members of this superfamily and performed a phylogenetic analysis to understand the evolution of TNFSF members throughout vertebrate evolution, now with the ability to resolve the events that took place during that transition from water to land.

As they hypothesized, TNFSF really expanded and diversified when lungfish evolved. New molecules support new biological functions, and in this case, new tumor necrosis factor members may have allowed the appearance of lymphocyte aggregates.

“Many people in the past had observed that mammals had more TNFSF members than for instance teleost fish,” Salinas said. “So something happened during the ‘water to land transition’ that led to this great diversification”

Salinas said there are about three to five good promising molecules that are likely involved in the formation of mucosal lymphoid structures. The next step is to show which of the likely molecular candidates identified is actually the one, or a combination thereof, that could be responsible for that new formation of lymphoid tissues in ectotherms.” 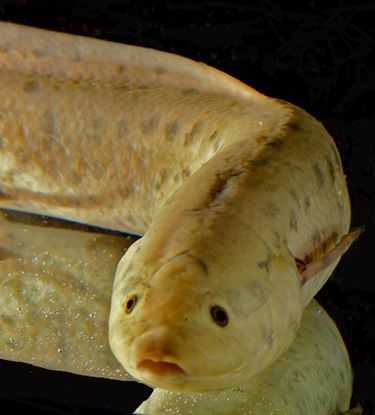 Lungfish are unique because they breathe with structures like lungs as well as gills. More importantly, lungfish represent the transition of vertebrates when they left aquatic environment and conquered the land.

Functional studies included infecting African lungfish nasally with pathogenic bacteria and examining the responses of the nasal lymphoid aggregates. The paper demonstrates that the architecture of the aggregates changes is response to infection, they actually double in size, and they also harbor many more B and T lymphocytes that contribute to the adaptive immune response. Infection also led to the formation of new aggregates of smaller size called “inducible lymphoid aggregates,” known to exist in mammals as well.

“Altogether, our study is groundbreaking and reveals that the forerunners of structures such as tonsils and Peyer’s patches appeared in the closest group to all tetrapods, the lungfish,” said Salinas.  “Now we really need to dig deeper. The next question is: what is the evolutionary advantage of having these lymphoid aggregates in their mucosa?”

Salinas thinks the research will continue to produce some great basic science and that the significance of this work will attract mucosal immunologists, evolutionary biologists and the public in general.

Apart from Salinas and Tacchi, the leading author, Erin Larragoite, an undergraduate student from the Salinas lab, also contributed to the research.

The research is enabled through a three-year grant by the National Science Foundation and the National Institutes for Health.