Clues left behind in a cave in central America have allowed an international, multidisciplinary team of researchers, including several at the University of New Mexico, to produce a new paleoclimate rainfall record that illustrates the contribution of manmade industrial emissions to less rainfall in the northern tropics.

The team, which included UNM Professor Yemane Asmerom and Sr. Research Scientist Victor Polyak in the Department of Earth and Planetary Sciences, and Associate Professor Keith Prufer and graduate student Valorie Aquino in the Department of Anthropology, reconstructed a rainfall record stretching back 450 years from unprecedented speleothem samples from Yok Balum cave in Belize using uranium thorium dating from the chemical composition in the speleothems containing aragonite, which is high in uranium.

The research, titled “Aerosol forcing of the position of the intertropical convergence zone since AD 1550,” was published today in Nature Geoscience and highlights the effects produced through manmade usage of fossil fuels. The results identified a significant drying trend beginning around 1850 that parallels the steady rise in sulphate aerosols in the atmosphere linked to the industrial boom in Europe and North America.

“In addition to the climate impact of human culture – the reason why this is truly important – not only in the climate locally in the tropics, but also globally is because the moisture transport across Central America from the Atlantic and Pacific, is presumably one of the key relays that modulates ocean currents and long term climate variability,” said Asmerom. “We are inherently interested in this tropical climate not just simply because of the impact on human culture, but because there is also a climate story.”

As part of the research, scientists also identified nine short-lived dry spells lasting from two to 10 years in the northern tropics since 1550. The dry spells came on the heels of very large volcanic eruptions in the Northern Hemisphere that produced similar emissions as those produced by burning fossil fuels.

“In Central America the populations are enormous. Their agriculture is rainfall dependent, which makes an enormous difference. It’s important to understand what’s going on with climate when we do see an increasing drying trend, which has direct impacts on food security.” – Keith Prufer, associate professor, UNM Department of Anthropology

These data provide strong evidence that any release of sulphate aerosols into the upper atmosphere led to shifts in rainfall patterns due to moderated temperatures in the Northern Hemisphere by reflecting the sun’s radiation. The resulting shift in the Intertropical Convergence Zone (ITCZ) – a tropical rainfall belt neat the equator – shifted towards the warmer Southern Hemisphere leading to dryer conditions in the northern tropics.

“This site was the perfect location for this study,” said Polyak, who performed the speleothem dating with Aquino using a Thermo Neptune multi-collector inductively coupled plasma mass spectrometer which allows uranium dating capabilities at UNM second to none worldwide. “The cave is located at the northern-most extreme of the ITCZ so any shift southward of the ITCZ will cause aridity. It’s very sensitive to the movement of the ITCZ, which was instrumental.

“This is the most resolute speleothem paleoclimate-based record for this time period. Because of that, we can pinpoint all of these eruptions in the Northern Hemisphere and the Southern Hemisphere that affected climate in Belize.” 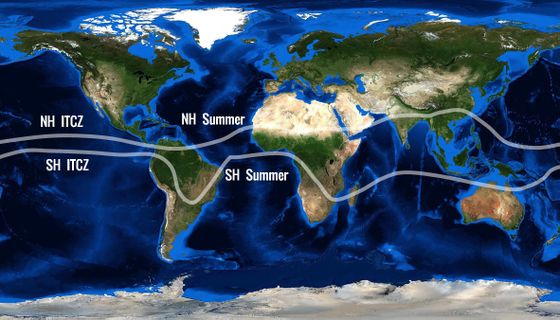 “In the backdrop of ever increasing global warming, there has been this change in the contrast between the northern hemisphere and the southern hemisphere due to aerosol load into the atmosphere as a result of increased industrial activity in the Northern Hemisphere since the 1850s” Asmerom said. “Natural aerosol load, such as volcanoes, act nicely as a proof of concept point of data across the time of interest over the last five or six hundred years. We can see that there were these massive volcanoes that put so much aerosol into the atmosphere to test the idea, but also in terms of overall aerosol load in the northern hemisphere due to industrialization in the 1850s. “

The findings, along with the paleoclimate record which gives researchers the understanding beyond a limited timeframe of natural variability, confirm previously published observations using 20th Century historical data and computer modeling.

“Although warming due to manmade carbon dioxide emissions has been of global importance, the shift of rain belts due to aerosol emissions is locally critical as many regions of the word depend on this seasonal rainfall for agriculture,” she said.

Two things anchor the work of the researchers including the amazing chronological work that’s been done on the archaeology and the climate record, while the second has to do with the skeletal populations the scientists get to examine. 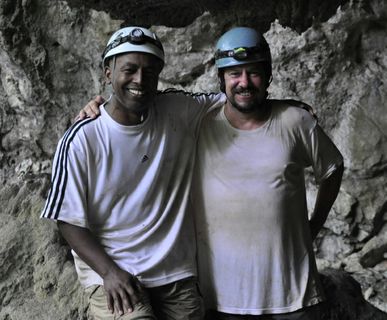 In terms of the human dynamics, the findings are very important. “We’re looking at the effects of moisture on incredibly important economic areas of the world in the tropics” said Prufer. “In Central America the populations are enormous. Their agriculture is rainfall dependent which makes an enormous difference. It’s important to understand what’s going on with climate when we do see an increasing drying trend, which has direct impacts on food security.

“Being able to link it to both anthropogenic causes and natural causes from the past to understand what’s happening provides a lot of information that will be useful for countries and for planners to know why things are the way they are today and the way things may be going in the future.”

Ultimately, the researchers are trying to link together human dynamics whether it be human to human – humans to environment or humans to political systems, and all the different types of nodes of interaction that have occurred. The networks have emerged into a broader story that has implications not just for archaeology, but being able to look at these processes in a way that informs and looks at the present, and allowing scientists to make informed statements about the future.

In addition to the paleoclimate archives, the study area also contains a rich collection of human remains. “We can look at the skeletons and figure out what they’re eating through the analysis of stable isotopes of carbon and nitrogen,” Prufer said. “We can then link that data on the availability of plants in the landscape, and link those to climate so we can create all these different feedback loops to figure out what humans are eating, what the available resources are and what’s happening in climate – is it warmer, wetter, dryer or cooler. Those are the big variables that affect the production of food and populations. It’s an incredibly complex story.”

The work was funded by the European Research Council, the National Science Foundation of the United States, the Alphawood Foundation and the Schweizer National Fund, Sinergia.