A team of scientists at The University of New Mexico is experimenting and learning about reforestation and the challenges presented by several environmental factors in the semi-arid southwestern United States where planted conifer seedling survival is typically low after a wildfire. The research examined how post-fire planting success is influenced by climate, topographic, biotic, and microclimate factors.

The number of wildfires that are burning hotter and causing large areas of tree mortality and removal has been increasing in the southwestern U.S. The live tree seed sources required for the natural regeneration of these formerly conifer-dominated landscapes are now too far for seeds to reach much of the severely burned area, requiring tree planting to overcome this limitation. Yet, planted seedling survival rates are low following wildfire in the southwest. 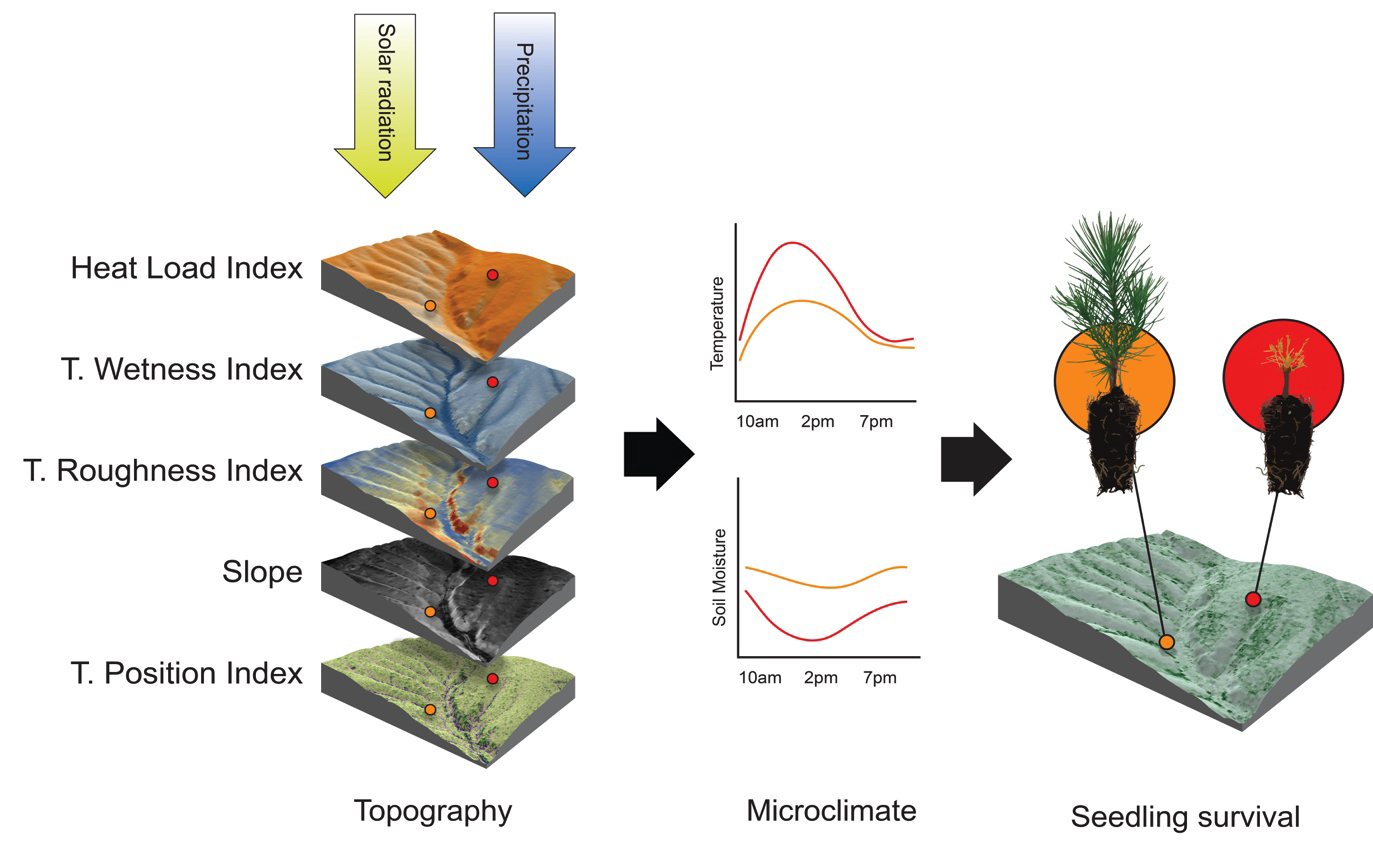 A conceptual diagram depicting climate variables interacting with a landscape, the heterogeneity of which is quantified using topographical indices, driving variation in microclimate which in turn affects the survival of planted seedlings in post-wildfire landscapes.

“Across the southwest, and particularly here in New Mexico, in recent years we have experienced several high-severity wildfires, and they are they're getting larger, as we saw with the Hermits Peak and Calf Canyon fires earlier this year,” said Christopher Marsh, a research assistant professor in UNM’s Department of Biology. “The really big areas of high-severity heat will not have seeds for trees to regenerate.”

Marsh described ponderosa pine seeds, which travel up to 200 meters from the edge of intact forest. “If you have a large high-severity patch, the seeds cannot reach most of the area and it will be dominated by shrubs or grasses initially, as we've seen after the 2011 Las Conchas fire in the Jemez Mountains. Planting seedlings can overcome this limitation, but survival rates are low across the southwestern U.S.” he said.

To better understand the factors that cause seedling mortality, the team of researchers, led by Marsh and doctoral candidate Joseph Crockett, planted 2000 tree seedlings of four species in the footprint of the 2011 Las Conchas fire in northern New Mexico. The seedlings were planted in 2016 and 2017 and monitored over a three-year period, along with microclimate data, such as air temperature at the height of the seedlings. The species included: ponderosa pine, piñon, southwestern white pine, and Douglas-fir.

Using several microclimate variables and site-level topographical indices the researchers conducted an analysis of seedling survival to determine which factors best predict survival. “Our idea was to quantify the microclimate. How hot were summer temperatures, how dry it was getting, how much moisture did the seedlings have available to them,” said Crockett. “We also included variables that were related to topography, really fine-scale topography. We went meter by meter to learn which direction the seedling was facing or how much water that particular spot on the landscape could be calculated to receive based on what's happening above it.” They found that topographical features that help reduce the amount of solar radiation, such as north-facing slopes, and those that tend to aggregate water, such as depressions in the ground, led to increased survival.

“The fact that these fine-scale topographic variables did such a good job of predicting seedling survival allowed us to build a model to predict ponderosa pine survival across the larger Las Conchas fire footprint because, unlike the weather, topography is pretty consistent from season-to-season and year-to-year,” said Marsh. “We used our planting data and data from an additional 1,145 ponderosa pine seedlings, planted by USFS, to increase the number of seedlings we used to build and test our model.”

Both sets of analyses highlighted the importance of landscape heterogeneity in shaping microclimatic environments and affecting seedling survival in a predictable manner, with areas receiving less solar radiation and more moisture promoting seedling survival. The results demonstrate that by using fine-scale topography data, such as one-meter (3.28 feet) resolution data, you can identify areas where conditions will be more suitable for seedling survival in the hotter, drier post-wildfire environment.

“Our goal was to use a modeling approach that would let us incorporate more data from future planting projects so we can improve our predictions. The idea is that as more of New Mexico burns and then gets planted, we can collect survival data so our model has higher accuracy and land managers can get higher survival rates to help bring down the cost of reforestation,” said Marsh. The UNM team has already received interest from the U.S. Forest Service for the Hermits Peak and Calf Canyon fires which the scientists are currently modeling.

Marsh and the team, which also includes Daniel Krofcheck, Alisa Keyser, Craig Allen, Marcy Litvak, and Matthew Hurteau, would like to see the planted seedling survival rate increase from the current rate of 25% across the southwest to 60 percent or more, which they think they can attain.

The team is part of Professor Matthew Hurteau’s Earth Systems Ecology Lab, which studies the influence of climate change and disturbance patterns on forests to inform policy and forest management systems.