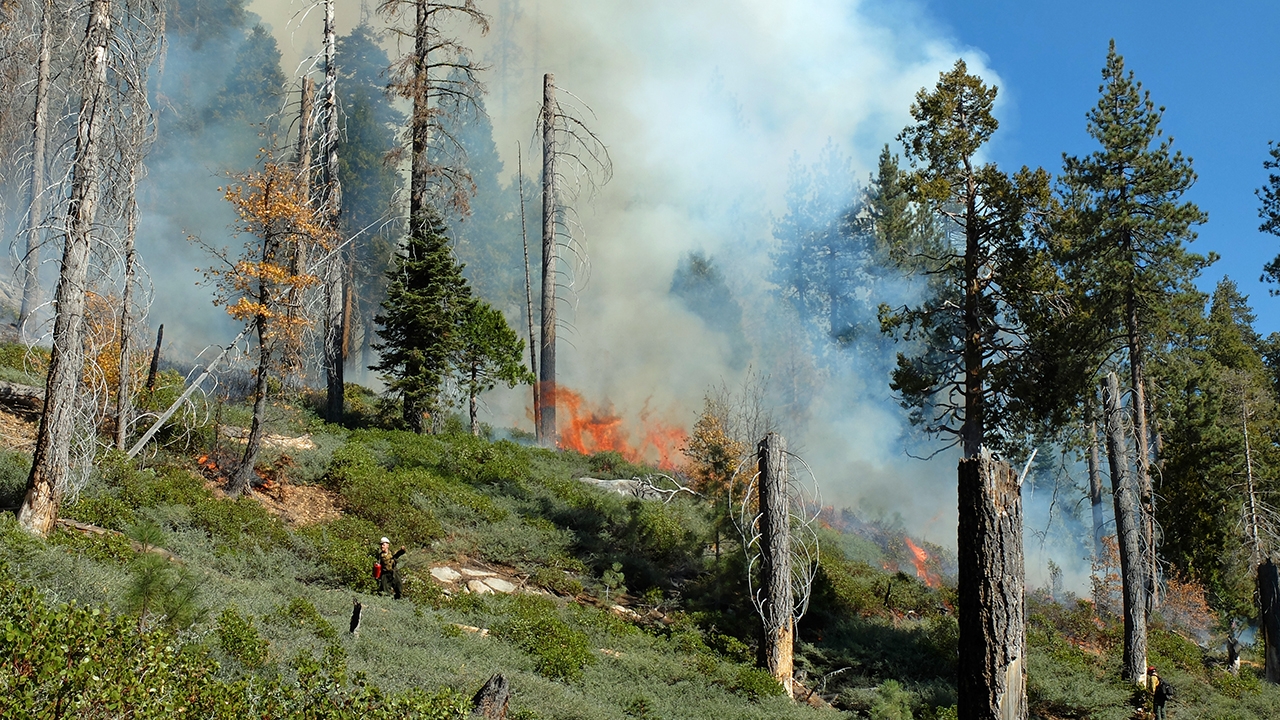 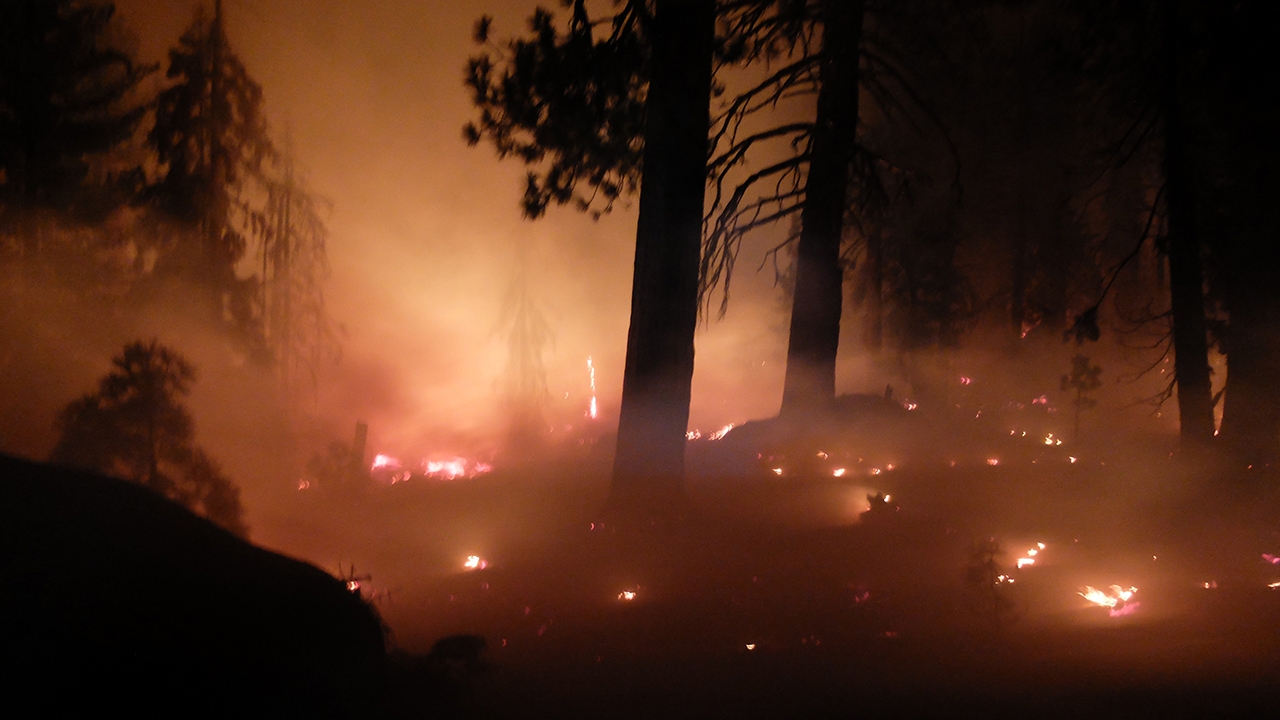 smoke during the night.

Scientists at The University New Mexico are working to help mitigate fire danger in Santa Fe watershed utilizing two scenarios involving thinning and conducting prescribed burns. Under both scenarios, the occurrence of stand-replacing fire was reduced.

Building from work done by the Greater Santa Fe Fireshed Coalition, a group consisting of city, state, federal and tribal government entities, Associate Professor Matthew Hurteau in the UNM Department of Biology and his team in the Earth Systems Ecology Lab, built a model to simulate the effects of different forest management actions for the area that includes and surrounds the Santa Fe municipal watershed, with the intention of reducing the risk of high-severity wildfire. The Santa Fe Fireshed Coalition provided the research team with a set of implemented, planned, and potential treatments to reduce the risk of high severity wildfire.

The research titled, “Optimizing forest management stabilizes carbon under projected climate and wildfire,” was published in the Journal of Geophysical Research - Biogeosciences, and is funded in part by the U.S. Department of Agriculture, NIFA and the New Mexico Chapter of The Nature Conservancy.

The Coalition’s treatments were primarily focused on Ponderosa pine forest and some dry, mixed-conifer. The researchers decided that given the natural role of fire in this dry mixed-conifer, they would evaluate the effects of including this forest type in a treatment plan. They developed a scenario that included selecting treatment locations based on the chance of high-severity fire, which involves the allocation of thinning treatments to areas with the greatest chance of burning under high-severity wildfire. This optimized scenario also included treating the rest of the ponderosa pine and dry mixed-conifer forest with prescribed burning, which can substantially reduce the area requiring thinning. The group modeled the Coalition’s treatments in the prioritized scenario, and ran the risk-based treatment placement in the optimized scenario.

“We compared not only how much treatments influenced the frequency of high severity fire on the landscape or the amount of high-severity fire, but also what this meant in terms of carbon emissions from the system and also carbon losses from treatment, and then how much area would have to be treated under both of these cases." – Associate Professor Matt Hurteau

The researchers compared these simulations with a no-management scenario, which excluded thinning and prescribed burning, to determine how the different management scenarios change the risk of high-severity wildfire and how they altered carbon losses under projected climate change and more severe fire weather.

“We sought to determine how management would influence wildfire behavior and carbon dynamics for two different scenarios under projected climate models for a municipal watershed in the Sangre de Cristo Mountains of New Mexico,” said Hurteau. “We ran a set of simulations using their treatment locations and encompassed all of those considerations – implemented, planned and potential. Then we ran a set of simulations with no management activity at all and used that to identify locations that had the biggest chance of burning under high-severity wildfire.”

Forests provide a wide range of ecosystem services, including climate regulation, that are dependent on ecosystem structure and function. Wildfire impacts a forest’s contribution to climate regulation by releasing carbon to the atmosphere through combustion and by killing trees, which reduces the amount of carbon removed from the atmosphere. Typically, management plans to reduce stand-replacing fire risk involve thinning small trees and prescribed burning, both of which reduce the amount of carbon stored in the forest.

In forests that historically experienced frequent-fire, fire-exclusion has altered forest structure and increased the risk of uncharacteristic wildfire due to increased tree density and the amount of biomass available to burn. Climate change is exacerbating this problem because higher temperatures dry out fuels and vegetation faster each year. These features continue to make forests more and more flammable.

Hurteau and his colleagues found that the optimized scenario stored more carbon because 54 percent less area in the watershed was thinned. This reduced carbon losses from management and halved the time it took the watershed carbon storage to surpass that of the no-management scenario.

“We compared not only how much treatments influenced the frequency of high severity fire on the landscape or the amount of high-severity fire, but then also what this meant in terms of carbon emissions from the system and also carbon losses from treatment, and then how much area would have to be treated under both of these cases,” said Hurteau. “The punchline to both scenarios is the decrease of risk of high-severity fire relative to no-management. However, the optimized scenario does it at a lower carbon cost because of the 54 percent reduction in the area treated by thinning.

In terms on approximate acreage involved, Hurteau said under the prioritized scenario it would involve burning about 4,000 acres per year, while under the optimized scenario it would be about 4,800 acres a year, but with increased carbon stored. In terms of emissions, the prioritized landscape or landscape treatment planning that the coalition came up with required a lot more area to be thinned. Typically, thinning a larger area involves additional economic costs.

Hurteau noted the upfront costs in terms of carbon – the amount of carbon removed from the system is much higher in the prioritized scenario because a larger area is being thinned. He explained that there is an economic cost to thin trees because the small trees in question really don't have a market value. To put the area involved into further perspective, the Santa Fe Fireshed is approximately 173 square miles, while the Albuquerque-metro area is about 189 square miles.

“Basically, by having lower upfront reductions in the amount of thinning, the debt that the forest has to make up from the carbon loss due to treatments is considerably lower than under the prioritized scenario,” said Hurteau. “Informing management based on risk helps build adaptive capacity to changing climate and maintains the climate regulation benefits of forests. Optimizing management can reduce high-severity fire risk and increase climate change mitigation by stabilizing forest carbon.

“However, in both management scenarios, maintaining carbon stability under changing climate and increasingly severe fire weather was contingent on the regular application of prescribed fire at return intervals that are consistent with historic fire regimes.”