After more than a year of additional planning and upgrades, The University of New Mexico is ready to welcome incoming freshmen to live on campus as part of its new freshman housing requirement beginning this fall.

The discussion for the on campus freshman housing requirement for first year students began nearly two years ago when the University’s Institutional Support Services (ISS) and Enrollment Management (EM) divisions were asked to conduct a thorough review of the pros and cons of the concept and make a recommendation to administration. Following the review, which found a number of benefits, including academic success, UNM had planned to implement the requirement in the Fall 2017. 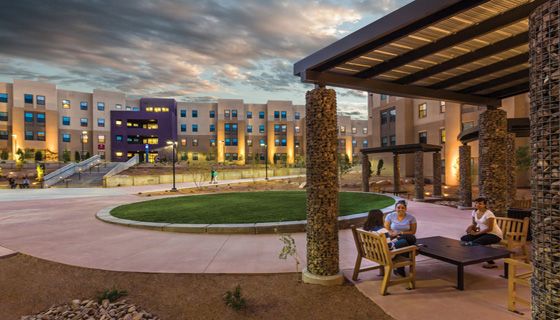 However, due to various concerns from the UNM Board of Regents in the summer of 2016 including the increased cost to students, available food and recreational services on campus, UNM pushed the start date back one year to address the concerns.

UNM President Garnett S. Stokes is passionate about the requirement.

“I have a strong belief in the value of students living on campus and its impact on retention – the research supports the effect it has on freshmen choosing to continue their studies into their second year," Stokes said. "Living on campus allows our students to more fully engage in the campus community."

“I believe the freshmen residency requirement is more of an ‘access to success requirement,’” added Eliseo “Cheo” Torres, vice president, Student Affairs. “Trends show that students living on campus have better grades, better retention and better graduation rates due in part to greater access to academic support through educational programming focusing on community, wellness, personal and professional development, diversity and inclusion; access to more social support through resident advisors who design and implement activities; and access to other students with similar interests through living learning communities.”

Administrators estimate the new requirement would bring in approximately 300 students to University housing based on their permanent residence more than 30 miles from UNM. The requirement also allows a number of exceptions including:

The University’s review found numerous advantages to living on campus, including enhanced student engagement, proximity to academic support, development of community, personal safety and no commuting stress. The findings also detailed a variety of perspectives from residential life that included data driven analysis of residence hall capacity to support a live-in requirement.

The completion rates are also significantly better for campus residents. Six-year graduation rates for on campus students who started UNM in 2009 was 52 percent compared to 45 percent for off campus. The five-year graduation rate was 41 percent for on campus and 33 percent for off campus residents. Surveys of those living in UNM housing seem to echo the sentiment that the environment is beneficial with positive feedback of nearly 93 percent satisfied or very satisfied with their experience. 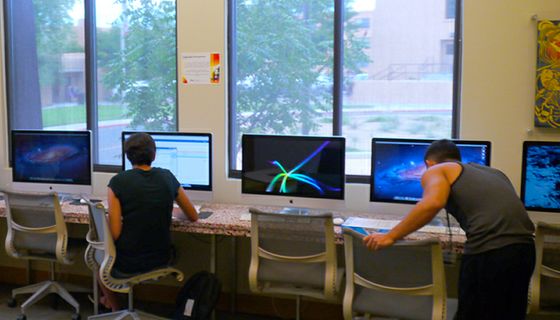 Students work in the computer lab at Casas del Rio.

UNM has increased its student success benefits of living on campus including educational programming models, trained staff to design and implement events and activities based programming models to enhance the college experience, Living Learning Communities that connect students directly to their academic program, affordability and safety considerations, projected enrollment impact of requiring students to live on campus and some policy considerations.

“There are many reasons why we believe students who live on campus tend to be more successful,” said Wayne Sullivan, director, Residence Life & Student Housing. “In addition to the convenient access to the campus academic and recreational resources, there is a focus on student development and support integral to the Residence Life model including the presence of our professional and student Resident Advisor staff, consciously designed programs and activities and a great sense of community and shared experiences.”

Improvements and amenities
UNM has invested millions in its residence halls over the past several years leading up to the requirement including $22 million to complete renovations in Alvarado Hall in 2015, Santa Clara Hall in 2016 and a three-year renovation of Coronado Hall, which began in 2017 and is expected to be completed fall 2019. Additionally, a $2.4 million renovation and upgrade for La Posada Dining Hall was completed last August providing incoming freshmen a premier dining facility with 24/7 access to nutritious options.

Cost comparisons to living off campus show an average per month cost for off-campus (one bedroom, not including utilities) at $650 in the Albuquerque area. This compares to an average cost of $559 per month on campus, which would include free utilities, and other amenities such as free Wi-Fi (a college essential), free Xfinity streaming service and laundry facilities. Other amenities include 24/7 Help Desk, security and computer pod with free printing. These amenities offer incredible value and add conveniences to the on-campus experience.

“Requiring our youngest and most vulnerable students to live on campus is common sense,” said Terry Babbitt, associate vice president for enrollment management. “Placing 18 and 19 year olds in a safe campus environment where they don’t have to drive and park and have academic and social support within a few steps will allow them to quickly gain momentum for success.”

“Combined with the convenience, we are providing a residential experience instead of just a place to sleep and study,” added Sullivan.