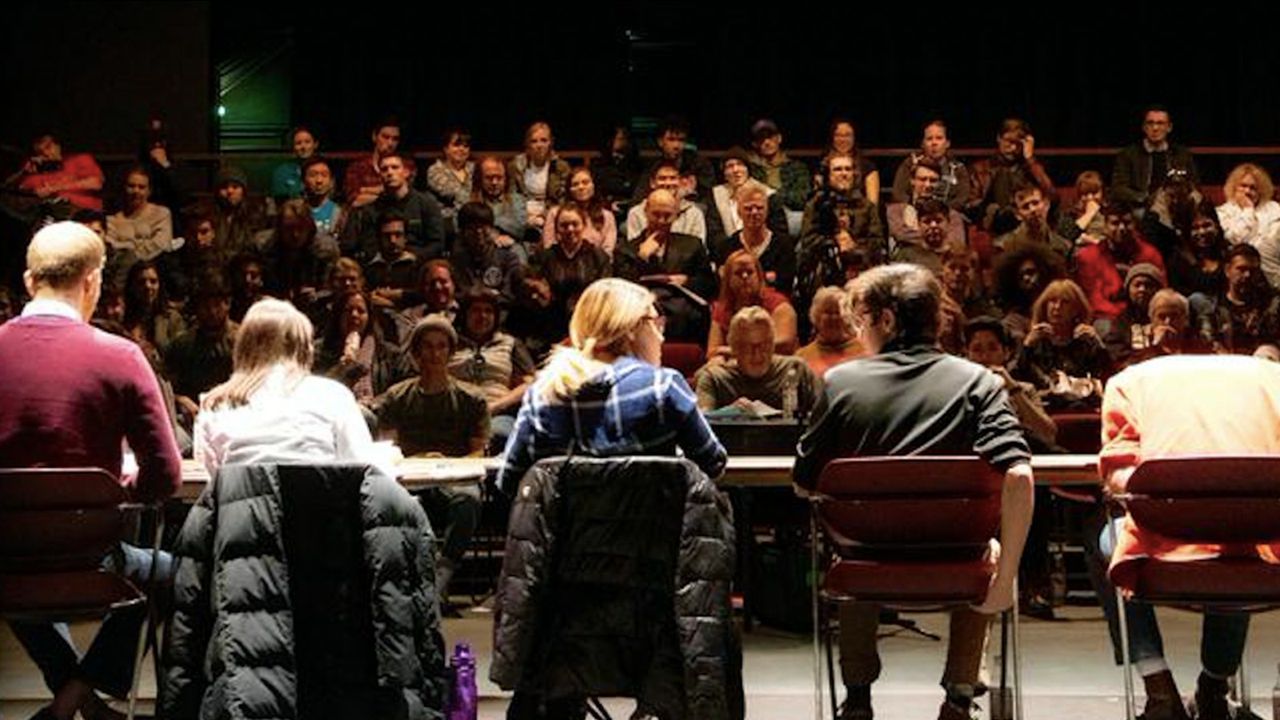 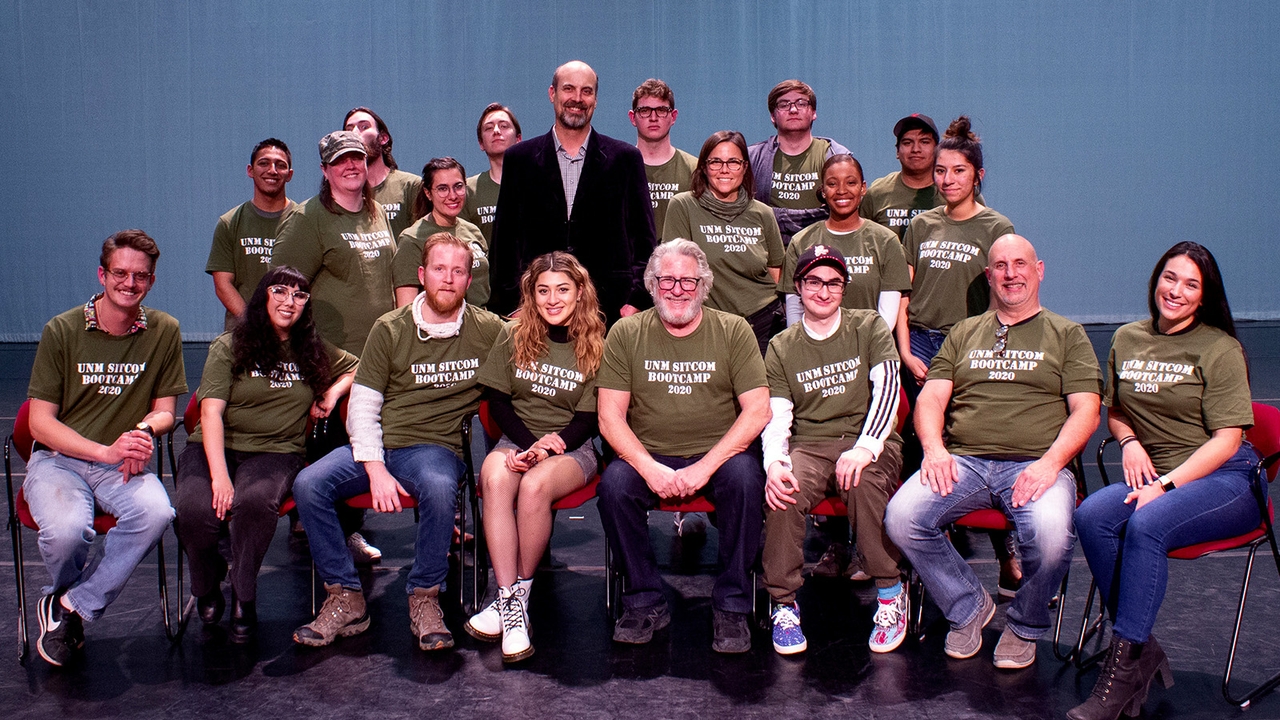 In just over 40 hours of class time, under the direction of UNM alumnus and Hollywood director/writer/producer Brian Levant, a group of students from The University of New Mexico Film & Digital Arts department has created a half-hour network-style comedy program to be presented via ZOOM. There will be one performance only of Two’s A Crowd, an original comedy by the UNM Sitcom Boot Camp, on Wednesday, March 10, at 7 p.m. via Zoom. The event is free and open to all.

The comedy, set in the early days of 2020’s COVID lockdown, tells the story of Ali Ortiz, a UNM grad student who moves out on her struggling boyfriend to take a position as an au pair to a COVID-denying couple who take off, leaving her to cope with their rebellious teenage son. The script was created and written by UNM students Kyle Alarid, Rafael Calvo Carillo, Sebastian Chavez, India Glennon, Alice Marshall, Miranda Miller, Yvette Ortiz, Anton Perez, Chantell Victorino, and Wynn Wink Moran, as well as faculty assistant Amy Yourd. 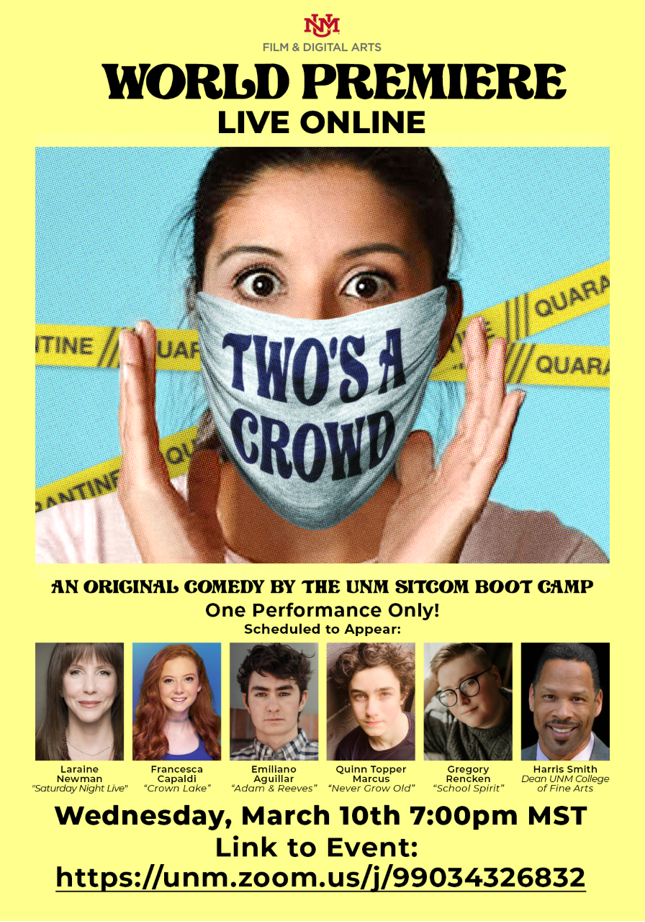 “For a small group of UNM Film & Digital Arts students to create, write and rewrite and rewrite an original half-hour network-style comedy program in this time frame is a daunting challenge,” Levant noted. “The situation comedy is a unique American institution and the format offers practiced efficiencies in structure, storytelling and character development, plus offering tremendous opportunities for improvisational thinking. These skills are essential and are transferrable across the entire entertainment spectrum.”

“Although I’m a writer by trade, I’d never done this type of writing, so the opportunity to learn from a professional working in the industry intrigued me. It was a really fun, but challenging, experience and satisfying to see how all of the parts came together for a production — from plot conception to casting actors. Working for the School of Engineering, I know the quality of our programs, but this experience made me really appreciate the amazing opportunities that UNM offers its students in the Department of Film & Digital Arts,” Delker said.

When Levant attended UNM from 1970-1974, there was no “film department.” With the innovation of the Bachelor of University Studies degree program, he was able to cobble together virtually every film history and theory course, along with photography, studio and art history classes, video, and independent classes in writing to pursue his degree. 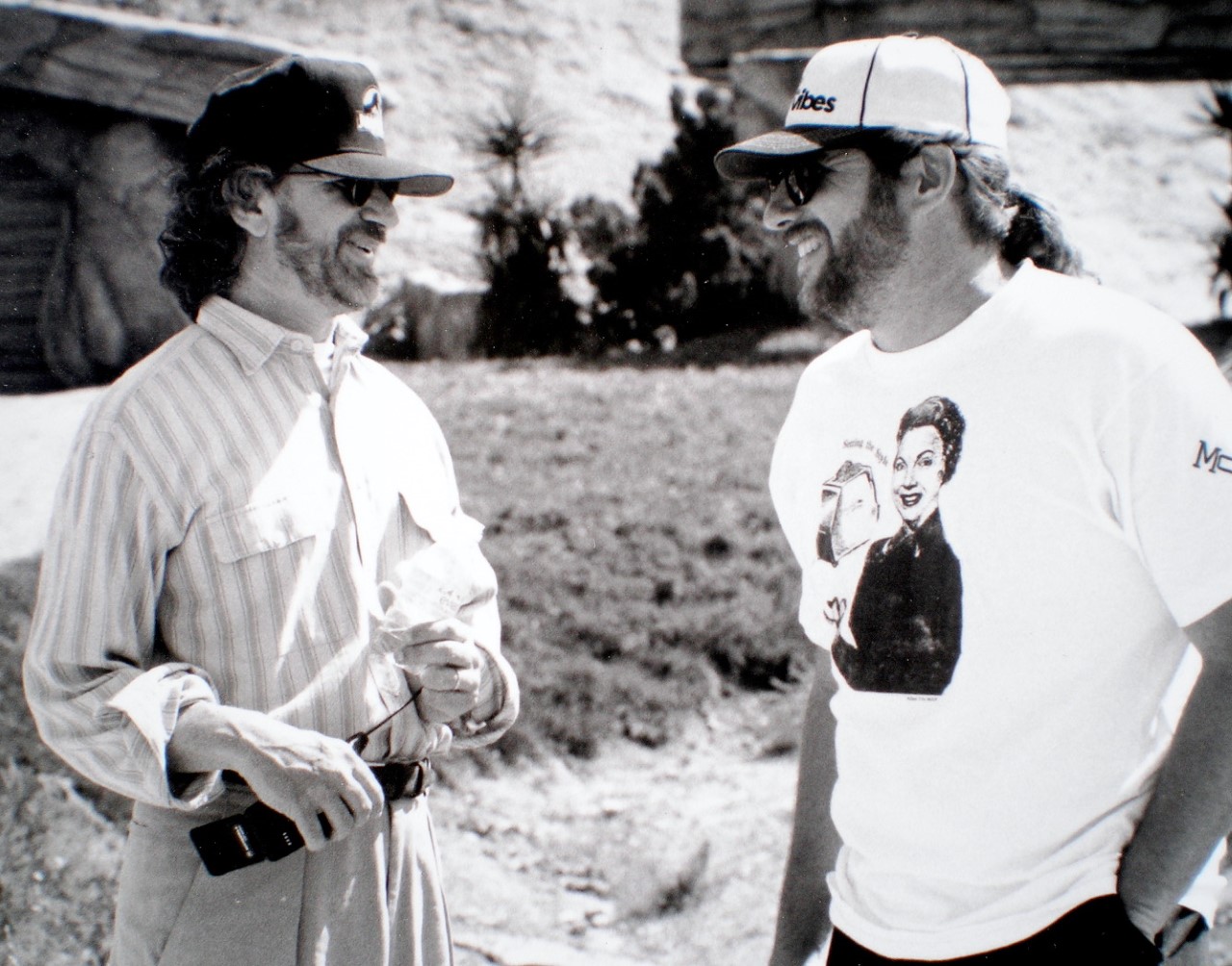 “Today, under the leadership of James D. Stone, who, like myself, learned at the knee of the department’s Professor Emeritus Ira Jaffe, UNM has a world-class film department. Their computer animation and gaming programs are doing extraordinary work and every year, the quantity and quality of the students’ films rises further,” Levant observed.

“The goal of the Sitcom Boot Camp is to unravel some of the intricacies of the craft, spur an understanding of the commitment, discipline and teamwork necessary to work at a professional level,” Levant said, adding, “By offering classes where students work alongside successful Hollywood writers like Mathew McDuffie and me, UNM is providing a ladder to help scale the wall that separates the student filmmaker from the professional.

Levant remarked, “The idea of me teaching a class at my alma mater began as a bit of a lark.… Four years later, it’s become a very important part of my life. Like everyone else, I’ve really missed being on campus this year. Over a half-century later after I arrived there, it never fails to remind me of what it was like to dream the impossible—and hope I can help make a few others achieve theirs today,”