University of New Mexico Chief Marketing and Communications Officer Cinnamon Blair and UNM Health Sciences Center Chief of Staff Gina Urias-Sandoval were among 24 Women of Influence recognized today by Albuquerque Business First at Sandia Resort & Casino. It’s the 18th year the publication has honored women who have made a positive and influential impact in New Mexico.

Blair and Urias-Sandoval were selected from a list of more than 180 nominees recognized for their contributions to the workplace.

“It’s a real honor for me to receive this recognition. I love what I do, the communities we serve and the state in which we live," said Blair. "I am so grateful for the women leaders in my life – in their varied dynamic and influential roles and positions, the change they effect instills a sense of optimism for the next generations - women are able to be bold, decisive and approachable as leaders. And the opportunities to lead can be found in so many ways in addition to the workplace – within families, neighborhoods, schools and community organizations – giving women the chance to create their own influence with courage, confidence and compassion.”

“I am honored to be recognized alongside such amazing women of influence,” Urias-Sandoval said. “I am also humbled and thankful in remembering how many women of influence I have worked with throughout the years that have made my professional path possible.” 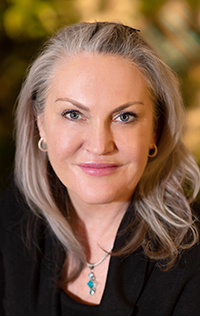 As a member of the President’s senior leadership team, Blair serves as the University's senior strategic advisor concerning communications, media and public relations, and marketing initiatives. She directs and manages UNM’s strategic marketing and communications functions including branding, strategic planning, social media strategies, media/public relations and critical events strategies. The integrated marketing and communication team combines programs and initiatives into a cohesive effort that conveys a consistent message in support of The University’s mission, strategic goals, and objectives.

Blair, who started her UNM career in 2003 as director of marketing at Health Sciences Center, also serves on several boards and committees including APLU Council on Strategic Communication Executive Committee since 2016. She’s currently chair and member of the APLU Board of Directors, the KNME Board of Directors and current chair, and UNM’s Committee on Naming since 2018. Previously she held positions for the New Mexico Economic Development Department and N.M. State Parks’ Energy, Minerals and Natural Resources Department.

Blair earned her Master of Science in Health Education from UNM and Bachelor of Arts in English and Political Science from Emory University in Atlanta, Ga. 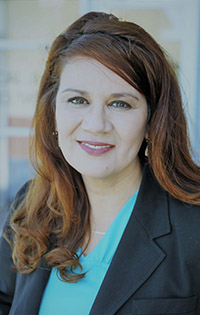 Urias-Sandoval was appointed to her position as Chief-of-Staff in 2021 by Douglas Ziedonis, executive vice president for Health Sciences and CEO of the UNM Health System. She started her career at the Health Sciences Center in 1999 and through the years worked in the UNM College of Nursing as part of the Robert Wood Johnson Center for Health Policy, and as a research program specialist in Family & Community Medicine. She later went on to work at the Center for Health Policy on main campus.

Most recently, she served as the executive director of the Executive and Professional Education Center and Corporate and Community Engagement at the UNM Anderson School of Management. Urias-Sandoval sits on campus-wide committees and is a longtime member of the UNM Staff Council.

She also sits on various community boards, including the National Hispanic Cultural Center Foundation Board, Workforce Connections of Central New Mexico and the Ronald McDonald House. She is a member of MANA de Albuquerque and has dedicated her career to mentoring youths towards college success.

Urias-Sandoval was born in Texas but moved to Albuquerque when was in junior high and considers herself a New Mexican. She received her bachelor’s degree and an MBA from UNM.

The selection process for this year's Women of Influence began with an open call for nominations. Nominees were then asked to submit an application for ABF judges, who were members of the 2021 Women of Influence class. Applicants were judged based on their professional achievements, leadership and community involvement. The top scorers were then named honorees.