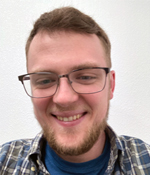 During his fellowship period, Gentry, a graduate student in the UNM department of physics, will be making measurements to characterize a set of 3D sensors, a novel silicon detector design which promises to do exactly that. Silicon detectors are widely used in experiments involving particle physics and play a key role in the tracking of high energy particles in experiments like ATLAS at the Large Hadron Collider, as well as in many applications in space, such as the International Space Station, where silicon detectors are used for human dosimetry.

Detector technology is frequently used for tracking detectors which measure the position of charged particles. The electronic characteristics of these detectors break down with increased exposure to radiation, until they can no longer be used effectively. In order to continue pushing the frontier of particle and astroparticle research in high radiation environments, it is crucial to develop new technologies that can withstand more radiation.

The Fellowship award is for $10,000 and will provide partial support for this project over the next two semesters. Gentry’s research advisor is Professor Sally Seidel.

The New Mexico Space Grant Consortium provides funding to faculty and students to develop competitive research and technology projects across New Mexico. The Graduate Research Fellowship is open to full-time graduate students enrolled at any university in New Mexico.

NMSGC is a member of the congressionally funded National Space Grant College and Fellowship Program that has been administered by the National Aeronautics and Space Administration (NASA) since 1989.