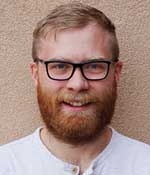 The neutrino plays a central role in many puzzles in particle physics and cosmology. Future measurements of its properties in both laboratory and space-based experiments hope to resolve many of these puzzles and, possibly, point to new physics beyond the standard model.

McFadden is working on a liquid argon active veto scheme that would shield the neutrino-less double beta decay germanium detectors. He is looking at the light yield from 105 liters of ultrapure liquid argon that is “doped” with 10 parts per million of xenon. No one has ever done this study with such a large volume of cryogen. McFadden is hoping to show that this system produces a lot of light and is able to be sustained for long periods of time.

McFadden is a member of a UNM group that is part of the international LEGEND collaboration. His research advisor is Professor Dinesh Loomba.