A University of New Mexico Ph.D. student is perfecting a new way to forecast stream flow levels with tremendous accuracy.

Mike Wallace is currently working on a Ph.D. in nanoscience and microsystems under UNM Professor Emeritus Harjit Ahluwalia. A hydrologist by trade, Wallace said he began focusing his research to stream flows in New Mexico about three years ago, stumbling upon an interesting connection between stream flow levels in the Rio Grande and a recurring temperature pattern in the Pacific Ocean, called the Pacific Decadal Oscillation (PDO).

“The flow record of the Rio Grande at the Otowi Gauge has always been of primary interest to many members of the regional wide water resources community. This gauge is near Otowi Bridge between Los Alamos and Santa Fe and has measured stream flow for over 100 years,” explained Wallace. “An equivalent 100 plus-year record for the PDO has also been independently developed. From my growing familiarity with the stochastic patterns of both, I could see, as a few before me had also recognized, that these two natural historical records looked remarkably similar to each other.”

After studying the numbers more carefully, Wallace found that when measured according to the climatological 10 year trailing average, a form of the Correlation Coefficient (CC) between a lagged PDO - Otowi connection was very high, about 80 percent. So, in May 2014, Wallace published his first quantitative hydro-climatologic forecast on his website, using the PDO. He predicted what the 10 year trailing average flow rate would be for the Otowi Gauge by the end of 2014. His projection was later shown to be 98 percent accurate. According to Wallace, this performance was a significant improvement over the current prediction methods that focus on snowpack levels in local mountains. 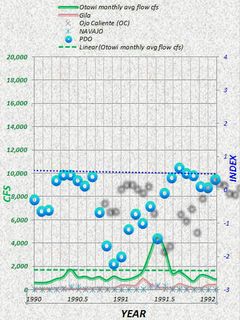 While continuing to work toward his Ph.D., Wallace decided to use his research to start a small business. He now serves a variety of customers, including local government subscribers to his quarterly forecast service. He forecasts stream flows and temperatures in Texas, New Mexico, Colorado, California, and Oregon, just to name a few.

“When planning a major infrastructure project for example, it’s beneficial to the manager of the asset to have a better sense of where the hydro-climate trends are,” said Wallace. “Are we trending to a warmer winter this year, or a colder winter? A wetter spring, or a drier summer? These are some of the questions that my method can help over the long term, to shave away a little more of the natural uncertainty from.”

And while his predictions have high accuracy nearly everywhere in his Southwestern US network, New Mexico has the strongest ocean correlations to stream flows and temperatures by far. This makes the Land of Enchantment the perfect place to utilize his work.

“I think, especially in New Mexico, there’s nothing more important than water. It affects every aspect of our society,” Wallace said. “So, I’m looking forward to serving the communities and providing them the best possible forecast accuracy.”

Wallace also described his ongoing preliminary UNM research work which appears to document that the sun's flare-ups highly correlate, through a "Hadley Annular Parameter (HAP)", years in advance to some hydro-climatology indexes of the US Southwest. This is in addition to the PDO connection, according to Wallace.

"Conceivably, many societies of the near future will be able to anticipate both natural temperature and moisture (multi-year averaged) in their regions, 4 years or longer ahead, with relatively high accuracy,” Wallace said. “This seems likely, even if many of the ocean and related connections turn out to be merely commensal, because of the strong lagged correlations already evident."