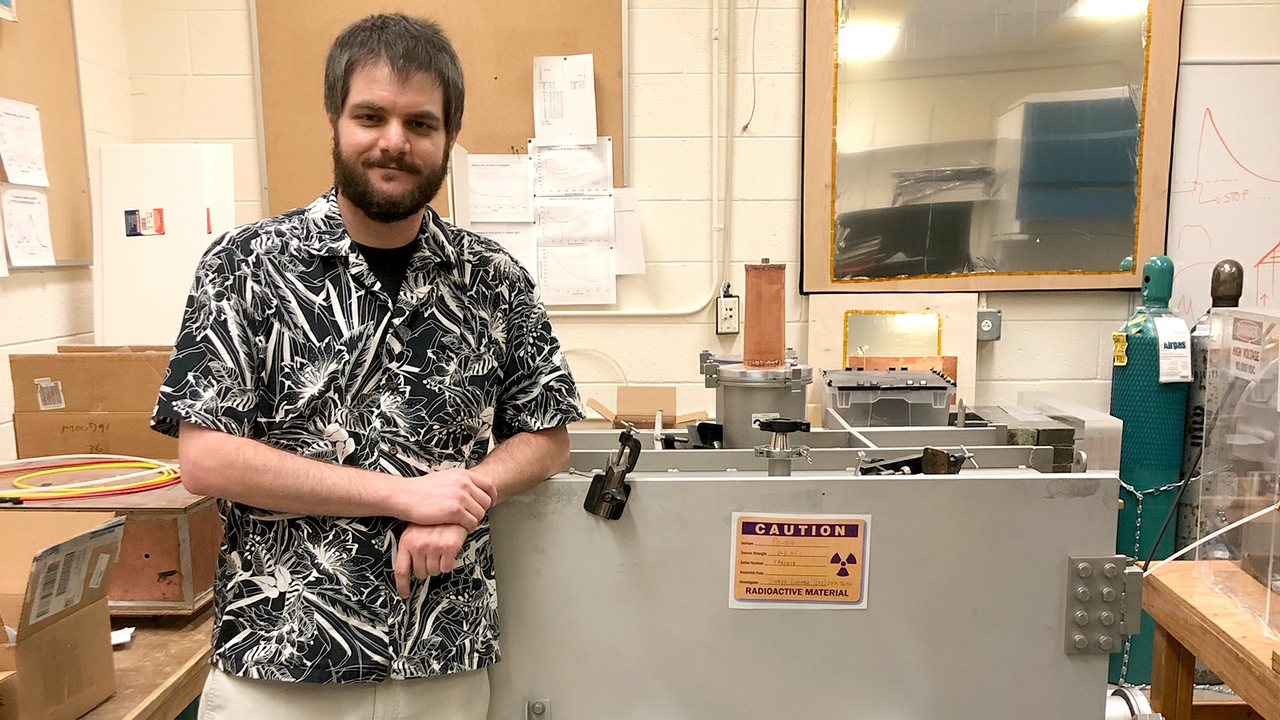 Alexandre Frederick Mills, a graduate student in The University of New Mexico's Department of Physics and Astronomy, is among 52 students from across the nation selected by the U.S. Department of Energy (DOE) for the Office of Science Graduate Student Research (SCGSR) Program’s 2020 Solicitation 1 cycle. He will be hosted by Los Alamos National Laboratory.

The SCGSR Program provides supplemental funds that will allow Mills to conduct part of his thesis research at LANL in collaboration with a DOE laboratory scientist within a defined award period. The award period for the proposed research project at DOE laboratories may range from three to 12 consecutive months.

“These graduate student awards help prepare new scientists for STEM careers that are vitally important to the DOE mission and the nation’s economy,” said Secretary of Energy Dan Brouillette. “We are proud of the accomplishments of these outstanding awardees and look forward to seeing what they achieve in the years to come. They represent the future leadership and innovation that will allow American science and engineering to excel in the 21st century.”

To qualify for the DOE SGCSR grant, the applicant must be a Ph.D. candidate. Candidacy is typically the last step in a Ph.D. program before writing and defending a thesis/dissertation. Mills passed his candidacy exam in the spring of 2019 and started his fifth year as a UNM graduate student this fall. He did his undergrad work at UNM, majoring in Physics with a minor in Mathematics.

Mills specializes in Particle Physics, specifically working on projects related to the direct search for dark matter. He grew up in Los Alamos and getting this grant to work at LANL “feels a lot like going home.”

He admitted his research project for the SCGSR program was complicated but he was excited to share and explain it.

“In brief, I am going to be building and testing electronics for an experiment looking for the Migdal effect. I will also be doing computer simulations for the same project,” he said.

The Migdal effect applies the quantum mechanics of electron states around an atom to show that, due to the nuclear recoil, the electrons sometimes go to an excited state or are ionized and then de-excite, emitting an x-ray. Experiments looking for Migdal x-rays have been done and those x-rays have been detected but the ionization has never been directly measured. So, Mills and his colleagues are building an experiment to try and detect the type of particle interaction that takes place in the Migdal effect.

“New advances in high resolution, high signal to noise detection technology  ̶  which I have been helping develop at UNM  ̶  have turned detecting the Migdal electron effect from a dream into a real possibility,” he explained, adding “In summary, I'm helping to build a detector to look for the electron Migdal effect. Ideally, I will also be running the detector and analyzing data from it but that part may occur after my DOE grant expires.”

On the science side, he said, the Migdal effect has applications in dark matter detectors or other rare event searches.  These searches are real tests as to whether or not we understand the universe in the way we think we do, he said.

On the practical side, the high sensitivity detectors being built have applications in several fields, including vulcanology where they could be used to image and detect the movement of magma inside a volcano.  Better detectors lead to better predictions for volcanic eruptions, Mills noted.

The detectors also have applications in the detection of radioactive materials, important for national defense.

However, the “long shot dream” is that this project will help find dark matter. Suffice to say it’s complicated but ultimately, Mills hopes they will discover a new particle, a new building block of the universe.

“I'm not expecting to see dark matter interactions in my detector.  But I do think that the detector I'm going to help build will be a step towards building a detector that can.  Helping to discover a new building block of our universe sounds practical to me, but I know people would disagree,” he remarked.

“The UNM Physics program has given me a solid, well-rounded understanding of the field. Hands-on research opportunities at both undergraduate and graduate levels have taught me skills important for the field that are not easily learned in the classroom, he said.

“The classroom work is no joke, though. No one going into Physics thinks ‘This will be easy,” he added.

Mills said for this project, his thesis advisor Dinesh Loomba works with low-pressure gas detectors, the type of detector proposed in his LANL project. “So, my experience working in his lab with these types of detectors is right in line with my project," he said. "I think the award is an excellent opportunity not only to do research but also to make professional contacts in my field. It was also good experience in applying for grants, which is an important skill for a career in physics.”