Two graduate students from The University of New Mexico's Department of Physics and Astronomy, including Andrew Forbes and Anupam Mitra, won awards at the 2020 Four Corners Sectional (Virtual) Meeting of the American Physical Society held recently.

The 23rd annual conference of the Four Corners Section was the third hosted by UNM since its 1998 inaugural conference in UNM's Regener Hall which attracted 80 participants. There were 266 participants and 177 presentations which were distributed among 142 sessions according to conference organizers including CSU's John Harton and UNM's David Dunlap. 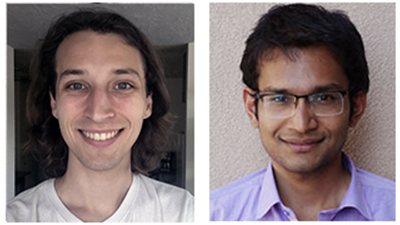 As part of the virtual conference, made possible with generous donations from the Four Corners Section and the APS, students presented research talks virtually. Normally, the talks are given in-person at the meeting. Forbes' presentation was titled Study of the rare decays of B0s and B0 mesons into muon pairs using data collected during 2015 and 2016 with the ATLAS detector, while Mitra's presentation was titled, How tractable is the simulation of open quantum system dynamics of Ising models? Both students won awards in the outstanding student talks category.

There were seven plenary talks, including the conference opening by UNM Regents' Professor and Center for Quantum Information and Control (CQuIC) Director Ivan Deutsch titled Breaking Heisenberg: Controlling the Quantum World, and a talk by LANL scientist Elizabeth Merritt (UNM Ph.D. 2013) on High-Energy Density Hydrodynamics for Astrophysics and Fusion.

Additionally, there were 15 parallel-session invited talks including UNM Assistant Professor Elizabeth Crosson, speaking on The sign problem and its relation to the spectral gap in quantum many-body problems, and Kathrin Spendier, University of Colorado CS (UNM Ph.D. 2012) speaking on Developing a Drug Delivery System Using Magnetic Particles – Tools and Strategies. The Bring-Your-Own Banquet talk was from Paul Davies from the ASU Beyond Center, speaking live from Australia.

The talk voted best-of-conference is recognized each year with the bestowing of the Spherical Cow Award. Deutsch was this year’s winner.

The Four Corners Section, established in 1997, includes the states of Arizona, Colorado, New Mexico, and Utah. Four Corners is the point of orthogonal intersection of the borders of these four states, the only point common to four states in the United States. The Four Corners Section has a strong commitment to support the work of physics students and to give them opportunities to present their research and to meet physicists in our region.

The Section offers small, regional meetings of limited expense and activities that can reach more APS members and potential members, including students and industry physicists. Section meetings unite participants from colleges, universities, industry, and government laboratories. In addition, the section contributes to greater awareness of regional activities in physics through its website and provide programs for public outreach.