Three University of New Mexico Public Administration (SPA) students were among the hundreds to take part in an international immersive simulation competition; and they brought home a top prize.

“The School of Public Administration is proud that three of its students represented UNM so excellently at the recent NASPAA Student Simulation Competition,” said SPA Director Felipe Gonzales. “We hope to make such participation a tradition of our program.”

On Feb. 25, nearly 400 students from around the world gathered at eight university locations in the Netherlands, China, Columbia and the United States. They competed in a one-day, immersive computer simulation that challenged them to address sustainable development goals like ending hunger, improving nutrition and promoting sustainable agriculture.

The students were divided into two teams who staffed a fictional, non-governmental organization focused on reducing global hunger. They analyzed data, made policy proposals, reacted the computer simulation results, drafted memos with recommendations and presented their strategy recommendations to teams of local site judges.

The UNM School of Public Administration was able to send three students from its Master of Public Administration program to compete. Jazzai Jimerson, Shruthi Nadig and Zlata Nourie traveled to Arizona State University in Phoenix to participate in that site’s competition. Nadig and Nourie collaborated on The Arizona State World One site team, which won the regional level. Judges commended the team's excellent visual presentation. 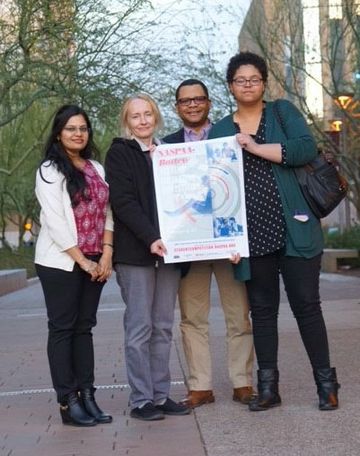 "The best part of this competition was to be a part of a great team,” said Zlata Nourie. “In a very modern simulation game we had an opportunity to contribute our ideas and efforts to help solve regional food security problems. We analyzed different program approaches and gave our suggestions. It was a very busy day, but so rewarding."

The team based in Bogotá, Colombia took home the overall prize for the simulation.

Click here to read more about the simulation program and the 2017 winners.