The New Mexico Department of Transportation is responsible for the safety of highway bridges over rivers and arroyos in the state. But what are their methods and how do they determine if a bridge is safe? For this, they have turned to the UNM Department of Civil Engineering, which has found a way to test the depth of the foundations of several bridges.

Two UNM Civil Engineering professors and their graduate students have spent the last several months looking at bridges over rivers and arroyos for signs of scouring.

“The primary issue here is increasing safety of bridges, said UNM Civil Engineering Professor Arup Maji. “What they wanted to know is whether UNM could develop a method to determine the depth of the footing or foundation below the surface.”

“The primary issue here is increasing safety of bridges. What they wanted to know is whether UNM could develop a method to determine the depth of the footing or foundation below the surface.” – UNM Civil Engineering Professor Arup Maji

The federal government requires that all highway bridges be examined to determine whether water flowing around the foundations has weakened the structures. The abrupt failure of a major bridge on Interstate 10 near the Arizona – California border last summer after a major rainstorm gave some urgency to the project. 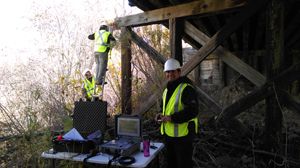 State transportation departments must certify to the federal government that they have examined the bridges and that the foundations are adequate to support both the traffic and the structure of the bridges themselves.

Maji said most of the highway bridges they are interested in were built more than 60 years ago. But over that time period, many things have changed, including in some cases the riverbed itself.

The bridges they examined were constructed of various materials including wood, steel and concrete. The material in the varying structures required different techniques. For some they introduced sonic waves into the foundation and listened for the echoes. For others they used magnetic induction, using signals to determine whether a steel or reinforced concrete foundation is sufficient to safely handle the weight it is required to support. 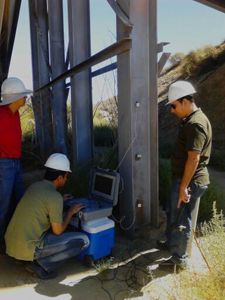 The bridge testing methods were nondestructive, so it required lab tests and field tests, which the students helped design. UNM Civil Engineering Professor Tang-tat “Percy” Ng said, “We have worked to figure out the depth and how much soil we have still holding the foundation.”

NMDOT will then do analysis to figure out whether remediation is needed and if so, how much needs to be done.

The UNM research group not only develops procedures for testing, they’ve also tested the state-owned bridges that had the highest priority, exceeding the parameters of their initial contract. Many of New Mexico’s highway bridges are 50 to 60 years old and for a small fraction of those old bridges the original drawings and specifications no longer exist.

Maji and Ng are now working with NMDOT to begin examining some of the lower priority bridges, work they expect to continue into next year.