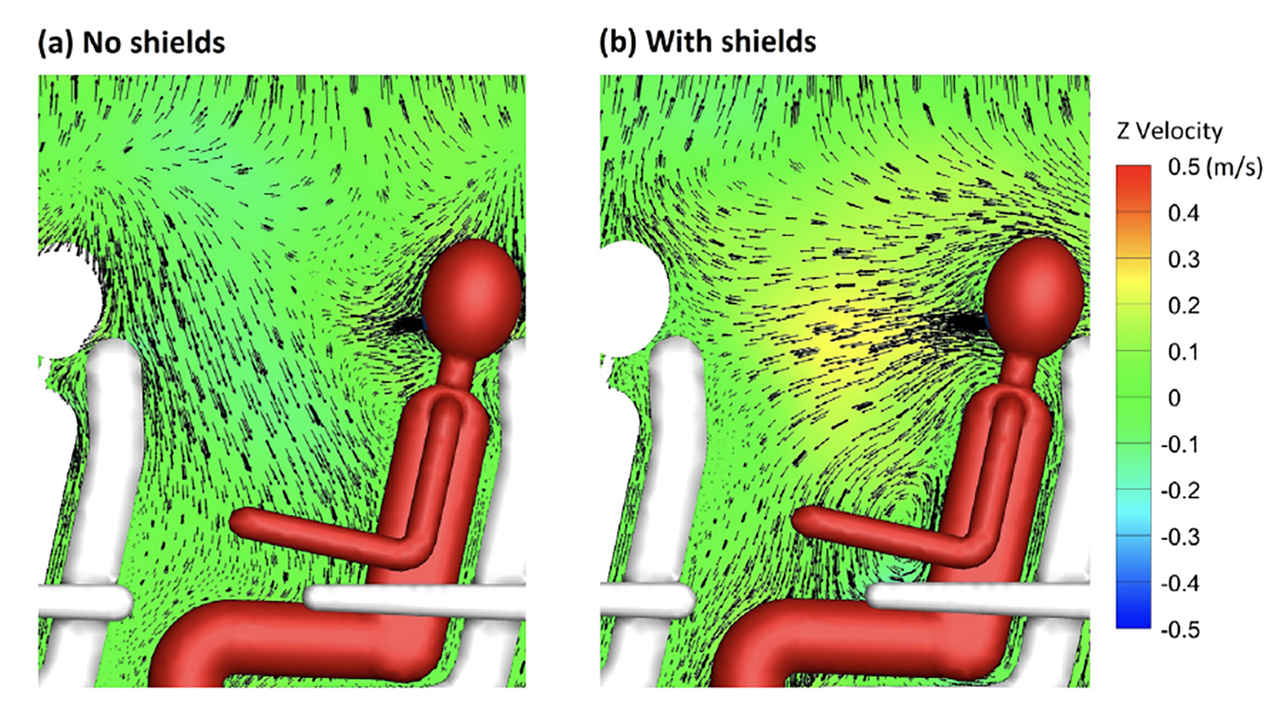 The ongoing COVID-19 pandemic has significantly reduced the number of people willing to fly due to safety concerns, and to ease fears, some airlines have opted to leave middle seats open to increase the amount of space for social distancing.

But the findings of a study led by researchers from The University of New Mexico and Imperial College London suggest that nonporous plastic shields (often called “sneeze guards”) installed between seats can prevent significant amounts of COVID-19 particles from being transmitted between passengers, thus allowing for fuller airplanes, and in turn, more revenue for airlines.

The study, “Simulation of aerosol transmission on a Boeing 737 airplane with intervention measures for COVID-19 mitigation,” was published March 16 in Physics of Fluids. Authors of the paper are Khaled Talaat of the UNM Department of Nuclear Engineering, Mohamed Abuhegazy of the UNM Department of Mechanical Engineering, Omar A. Mahfoze of the Department of Aeronautics at the Imperial College London, Osman Anderoglu, assistant professor of nuclear engineering at UNM, and Svetlana V. Poroseva, associate professor of mechanical engineering at UNM.

The study looked specifically at the Boeing 737 cabin and its ventilation system and cannot automatically be generalized to other airplanes with different ventilation systems or other public spaces without further study, Abuhegazy said.

The researchers compared the velocity distribution of air through a section of the cabin, finding that there were substantial differences in the flow pattern after sneeze guards were installed. The shields essentially kept the airflow and the particles on the passenger who emitted them.

Based on the amount of aerosol transmission and inhalable particles present in the cabin, “The findings indicate that sneeze guards between passengers are about equally as effective as leaving middle seats vacant,” Abuhegazy said.

He said that in terms of economics, using sneeze guards in full-capacity flights may be more cost-effective than reducing passenger capacity through vacating middle seats, considering that the shields are reusable (sanitizing the shields after each flight was recommended, as was covering seats and disinfecting walls between flights). Another finding recommended that passengers be boarded in smaller groups, starting in the back, and waiting two to three minutes between groups, as the study found that aerosol particles were settled in that timeframe. The study did not look at the increased time for boarding needed for that to be implemented.

The paper has been selected to be featured on the Physics of Fluids website through the end of March.