Asmerom, Polyak instrumental in determining age of most complete human skeleton ever found in the Americas
By Steve Carr May 15, 2014
Categories: Latest News Earth & Planetary Sciences

Her name is Naia, and for thousands and thousands of years, the skeleton of this young woman was buried underwater in an elaborate cave system in the Yucatan Peninsula after she had apparently fallen into what was then a dry deep pit.

Now, a team of researchers, including Professor Yemane Asmerom and Research Scientist Victor Polyak at the University of New Mexico’s Department of Earth and Planetary Sciences, have accurately determined the age of the oldest-known, well-preserved human skeleton.

Naia was one of the earliest inhabitants of the Americas and has helped resolve a long-standing question of the link between ancestral Americans and modern Native Americans.

“The challenge, to date, has been finding a fossil of an adult complete enough to do the morphology work, preserved enough to have mitochondrial DNA, while at the same time having appropriate material for dating,” Asmerom said. “Naia, the most complete human skeleton found, meets those requirements. Our lab here at UNM was ideally suited to do the dating work and thus why we were part of this international collaboration.”

Naia’s skull shape does not look like those of Native Americans, but the Beringian-derived mitochondrial DNA (mtDNA) D1 haplogroup (D1) directly links her to the modern Native peoples of the Americas. The physical differences between Paleoamericans and Native Americans, likely resulted from in situ evolution rather than having a separate ancestry. Her ancestors' origins were in Beringia, an area once above water between Siberia and North America. The D1 haplotype likely developed after early humans moved into the area from elsewhere in Asia.

The near-complete human skeleton, with an intact cranium and preserved DNA, was found along with other extinct fauna by a team of scientific divers led by Alberto Nava Blank from Proyecto de Espeleologia de Tulum (PET) in the Sac Actun cave system located off the eastern Yucatan Peninsula in 2007.

The divers coined the location where Naia was found as “Hoyo Negro” (Black Hole) because of the hole’s vast impenetrable darkness. The pit, described as a deep, massive chamber 200-ft. in diameter and 20- to 190-feet from top to bottom, was so vast it absorbed all visible light from powerful underwater lights that could not see the other side of the chamber. 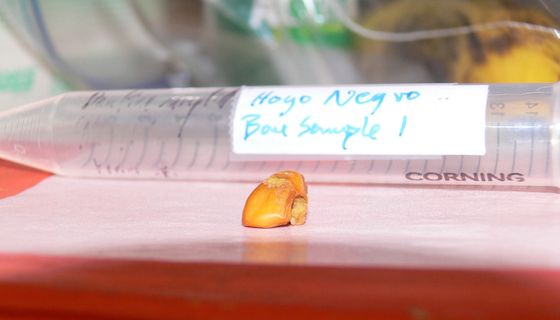 A tooth from Naia was one of the samples conducted via uranium thorium dating at the University of New Mexico.

To unravel the mystery of Naia’s age, Asmerom and Polyak first conducted uranium-thorium dating of one of her teeth. And while those first results were promising, the results were inconclusive.

However, more clues were left behind in the cave. Mineral deposits in water dripping from the roof of the limestone cave splashed onto the cave floor, and mist from those drip water impacts formed delicate rosette-looking speleothems (cave formations) that the divers called ‘florets.’ It turned out the average age of the tooth data also converged to the age obtained from the mineral deposit data.

Independent radiocarbon data were provided by two labs including Douglas Kennett of Penn State University. A third approach to the age constraint was provided by the UNM and Penn State teams consisting of refining regional sea-level data, which provides the minimum age at which the cave was inundated. Naia’s resting place is now 130 feet below present-day sea-level.

The refined sea-level curve showed that the site, now 42 meters under water, would have become submerged during sea level rise between 9,700 and 10,200 years ago, long after Naia and the other extinct animals likely fell into it.

"Because the florets grew on the human bones, we knew that dating them would give us a minimum age for the bones,” Polyak said. “And again, given that Hoyo Negro pit was dry when Naia made her way to the bottom, the florets had to have grown between the time of her death and 10,000 years ago when the bottom of the pit became submerged by brackish water because of rising sea level. Therefore, the oldest pieces of florets provided the oldest minimum age.” 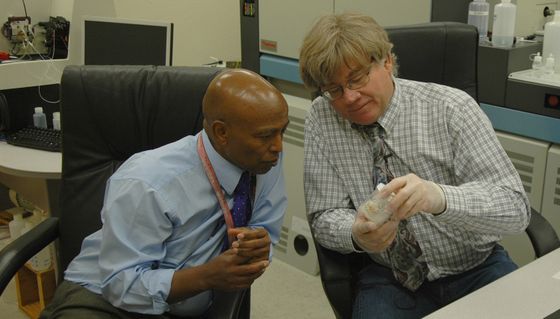 Having perfected this method of speleothem chronology with near pinpoint accuracy in previous research over the years in their state-of-the-art Radiogenic Isotope Laboratory at UNM that Asmerom leads, they were equipped to date the delicate florets that adhered to the top of Naia’s body after she fell in the cave. The radiocarbon dating of the DNA tooth enamel yielded a maximum age for Naia of 12,900 years ago, while UNM’s uranium-thorium results provided a minimum age of 12,000 years ago, confirming that Naia was a Paleoamerican.

“Years of effort to develop our methodology, including technical and the refinement of the half-lives of short-lived isotopes of the decay of uranium, has paid dividends,” Asmerom said. “We are gratified by the fact that we played a crucial role in helping answer one of the outstanding questions in anthropology. At UNM we spent a fair amount of effort and resources on this project; we believe that the product justifies the investments,” said Asmerom.