Near Geneva, Switzerland, an experimental facility, 17-miles in diameter, shoots protons at almost the speed of light to see what happens when they crash into one another. The Large Hadron Collider (LHC) is located at CERN, the European Organization for Nuclear Research, and is the largest and most powerful particle accelerator on the planet.

Several experiments take data at the LHC, including the largest called ATLAS. And, on the other side of the world, in The University of New Mexico’s Department of Physics and Astronomy, a research group is making big contributions to this massive experiment more than 5,000 miles away.

Dr. Sally Seidel, a professor of physics, has been working in this international collaboration for more than two decades. Over the years, she and her research group, which includes graduate and undergraduate students along with UNM Research Electrical Engineer Martin Hoeferkamp and postdoctoral fellow Konstantin Toms, have designed and developed parts of the ATLAS detector. 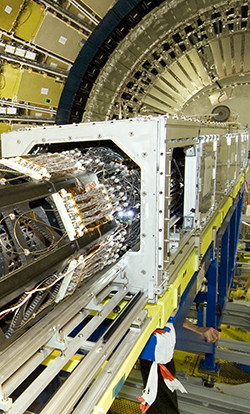 “Our UNM group develops new technologies to detect particles. Those technologies form the basis of novel detectors that we then install in ATLAS and use for collecting data,” explained Seidel. “Our group also analyzes data we participate in collecting at CERN, and we develop new physics algorithms, new ways of investigating the processes that are recorded in the detector.”

In 2012, ATLAS, along with the CMS Experiment, discovered the Higgs boson – an elementary particle in the Standard Model of particle physics that causes the things in the universe to have mass. That discovery motivated the awarding of the Nobel Prize to the theorists who first hypothesized the existence of the particle.

“It was very satisfying being a part of the Higgs discovery because it was a successful realization of goals and preparations going back to the 1990s,” said Seidel. “Our group joined the experiment in 1995, helping design the detector itself and forming collaborations to analyze the data. There are students who earned UNM bachelor's degrees who can say that they handled actual components of the detector now operating at CERN and contributed to its development."

The LHC is essentially creating a lot of very small ‘Big Bangs’ – the decisive event scientists say occurred at the dawn of the universe. It’s by replicating those conditions that researchers learn about what particles may have aided in the formation of the universe and its subsequent development, including perhaps the mysterious dark matter and dark energy.

By analyzing data from ATLAS, the UNM group discovered an entirely new particle, called the Bc(2S), which the collaboration announced at an international conference in 2014.

Most ATLAS experimenters specialize in designing and building a part of the experiment's hardware. Seidel’s group works on a portion of the device called the Pixel Detector – an extremely complex electronic camera that’s able to detect and record almost every particle created in the proton-proton collisions. According to Seidel, particles created in the mini-‘Big Bang’ pass through the Pixel Detector's electronic circuits, leaving momentary ghostly tracks, sometimes revealing particle types never seen in any experiment before. Almost immediately after they’re detected, images of these tracks are sent around the world to be viewed by ATLAS’s 3,000 collaborating researchers – scientists and engineers on every inhabited continent. 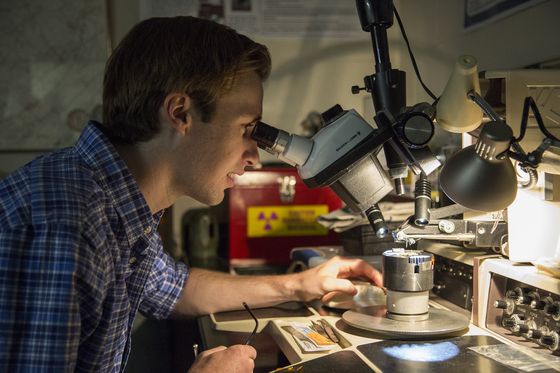 Right now, the UNM team is working to develop a more advanced Pixel Detector that can be installed inside ATLAS when the collider is upgraded in a few years. To continue to make new discoveries, researchers plan to increase the rate of the proton-proton collisions, which means the technology inside the detector must be upgraded as well.

“The higher the energy and more frequent the collisions, the more opportunities we have to find increasingly rare processes; things that were invisible before,” explained Seidel. “What we’re developing are more sensitive devices and electronics that are able to respond more quickly to pick up the increase in collision rate."

Seidel’s group also uses some uniquely New Mexican facilities to conduct collaborative experiments with LHC researchers from all over the world. The materials used in the LHC experiments must be able to withstand incredibly high levels of radiation – something UNM is able to test with facilities at Sandia and Los Alamos national labs.

“Our collaborators from all over the country and the world send us devices to expose to controlled radiation at the national labs, and then we study the detectors' response,” explained Seidel. “So, while UNM is only one institution in a collaboration of 174 universities and national labs from 39 countries, we have a unique role because of our location in New Mexico.”

A digital rendering of what the future Physics & Astronomy and Interdisciplinary Science center.

Because of the role Seidel and her research group play in the ATLAS experiment, she says she’s excited about the new Physics & Astronomy and Interdisciplinary Science (PAIS) center and what the facility will mean for, not only her research capacity, but the entire department.

Along with obvious benefits of having a new and improved facility to conduct research in, Seidel says one of the biggest benefits will be the sheer size of the space. Due to the complexity of the work her group does, having a space large enough to accommodate large detectors under construction will allow them to build new components and make entirely new technological contributions to both ATLAS and other experiments on the horizon of the 21st century.

“PAIS is going to provide our group and others an assembly hall space in which to build larger detector elements that we haven’t been able to build before, because of our current restricted lab space,” said Seidel. “Having that upgraded space and infrastructure will be a big benefit to our students and the work we’re doing.” 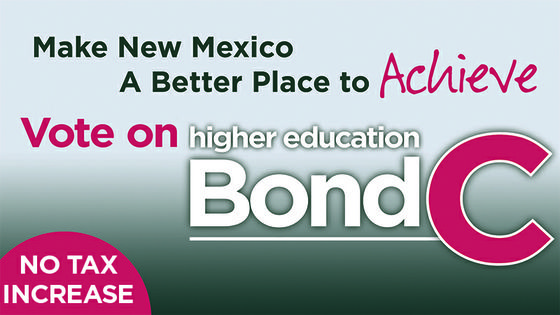 Along with funding projects on UNM’s main and branch campuses, Bond C will also provide millions of dollars for higher education institutions across the state, all without raising taxes. Additionally, the investment by voters will have a big impact on the state’s economy and is projected to create more than 1,300 new jobs – a huge boon to families across the state.