According to the U.S. Department of Veterans Affairs, in 2014 an average of 20 Veterans died by suicide each day and that number continues to grow. To put this into perspective, Veterans, despite accounting for 8.5 percent of the total U.S. population, account for nearly one-fifth of all suicides nationwide.

Heavily-populated military states such as California and Texas have historically not reported Veteran suicides, so the number may actually be much higher. These startling statistics are why The University of New Mexico’s Counselor Education program is investing in classes and research to support the mental-health and educational needs of our Lobo Veterans.

“Our Veterans need support. Mental health stigma can be considered any belief that leads to shame or guilt regarding either the experiences of mental health symptoms, or its subsequent treatment,” says Aaron Smith, UNM Veterans-Transition course instructor. “These typically include beliefs that mental health symptoms are characteristically abnormal or indicative of some kind of character flaw.”

According to recent studies, as many as half of the Veterans that would qualify for a mental health diagnosis do not seek treatment. The likely culprit being the stigmatization of mental health issues in the military and civilian sectors. In fact, the military formally requested that the word “disorder” be removed from the Diagnostic Statistical Manual of Mental Disorders V (DSM-V) to help combat the problem, but the request was denied by the American Psychiatric Association in 2013. 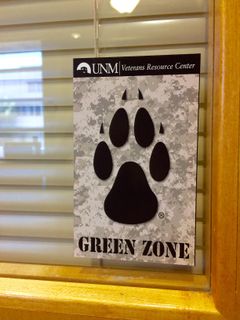 The Green Zone paw identifies allies to the military community, faculty and staff, who have completed training to help foster a supportive environment at UNM.

“Some Veterans, as well as civilians, perceive that if they disclose that they are struggling, they may be misperceived as weak, flawed, or disordered,” says Smith. “In reality, the reliability and validity of mental health diagnoses are heavily in-question within mental health communities. New research on phenomenon such as Posttraumatic Growth are providing evidence that not only are mental health symptoms often normal reactions to abnormal situations, but as many as half, according to a 2015 study, are likely to experience positive gains in the aftermath of difficult experiences.”

Research also suggests while many Veterans are validly hesitant to ask for assistance, they will also tend to accept assistance when offered. UNM’s Counselor Education program sponsors a clinic—the Manzanita Counseling Center where Veterans can receive needed help.

At the Center, the Counselor Education program is developing research to help end mental-health and Veteran related stigmas. The program is also offering a course for Veterans-in-Transition (COUN 492) from the military to college, taught by Instructor Aaron Smith, a doctoral student and eight-year Veteran of the U.S. Marine Corps.

“UNM’s Counselor Education program has long been a leader in multicultural and social justice issues that affect our communities,” said Smith. “True to this mission, the program has developed a course for Veterans-in-Transition away from the military and into college, while also providing members of its faculty to support opportunities for the program’s students to engage in actionable counseling research in support of Veterans’ mental health.” 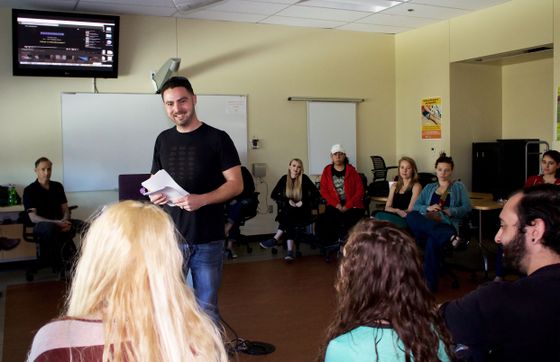 Aaron Smith, Veterans-Transition course instructor, introduces a guest speaker to his class. The speaker, a longtime monastic Buddhist monk, joined the student-Vererans to talk about and engage in mindfulness meditation.

There are also opportunities for faculty from all departments at UNM to become a source of support for student-Veterans. Professors and class instructors can enroll in Green Zone training offered by the UNM Veterans Resource Center to learn more about how they can make their classrooms safer for student-Veterans.

“Green Zone Trainings prepare university faculty and staff to better understand the experience of Veterans, service members and their families at UNM,” says Program Coordinator Stephen Weinkauf. “UNM has over 1000 identified veteran and military students on campus. Some might have disabilities—both visible and not—or transition issues that make the classroom environment more challenging. We know that when Veteran and military students are given the resources to excel, they do just as well if not better than their civilian peers. We want to encourage that support and ensure that every one of our Veterans and military students have the opportunity to succeed.”

Individuals who complete the Green Zone Training are visibly identified by a “Green Zone” Lobo paw print. Similar to the “Safe Zone” program of the LGBTQ Center, the Green Zone paw identifies allies to the military community and helps foster a supportive environment at UNM.

To support keeping Veterans in the classroom, student-Veterans are organizing a campus-wide service learning campaign to end Veteran related stigmas across the university. On Nov. 9 from 9 a.m. to 2 p.m. the UNM community is encouraged to stop by the northwest corner of Smith Plaza to learn more about support programs and smash a pumpkin after learning information that counters a stigma regarding mental health or Veterans. Students will also be encouraged to make a commitment to make at least one other person aware of this information.

To refer someone to the UNM Counselor Education Program’s clinic, the Manzanita Counseling Center, call 505-277-7311.