Albuquerque area firefighters pulled to the curb of UNM Hospital on Wednesday with a special delivery meant to ease an 11-year-old patient’s difficult recovery.

Some Belen residents were also on hand to deliver gifts and to show community support for Magen Sanchez and her family. The girl was riding on the back of a motorcycle with her father, Daniel Sanchez, last month, when a suspected drunk driver veered over the center line and hit the motorcycle head-on. Daniel Sanchez, a University of New Mexico employee, died, and Magen suffered severe injuries to her leg, including a broken femur.

“I’m just very thankful,” Magen’s mother, Naeomi Sanchez, said of the outpouring of support her family has received since the Jan. 25 crash south of Belen.

Members of the Albuquerque and Bernalillo County fire departments gave Magen a bag of get-well gifts, including an iPad and headphones, that they hope will help her pass the time as she recovers from multiple surgeries. Some of the Sanchezes’ neighbors in Belen also delivered a wagon-full of toys for Magen and her two siblings, Dante, 4, and Candice, 2.

“We just wanted to put a smile on her face, to show that we care,” said Jessica Romero-Aragon, a Belen resident who helped organize Wednesday’s gift delivery. 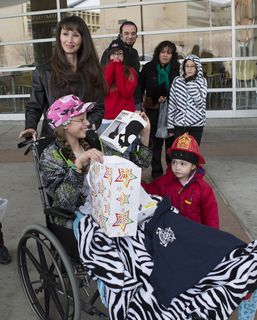 Magen did have a smile on her face as she opened the gifts and chatted with firefighters. Naeomi Sanchez told reporters that she expects Magen to be released from the hospital Friday, after a two-week stay. But the healing process, she said, is just beginning.

“I feel for the kids,” Naeomi Sanchez said. “As adults, we know what death is, that it’s part of life. But for the kids, it’s not just about death. It’s about losing their father.

Magen and her father were “inseperable,” Naeomi said, adding that Magen feels that her father is with her in spirit.

Family members, neighbors and co-workers remember Daniel Sanchez as a devoted father and husband, who had a strong work ethic. The 51-year-old electrician had worked for UNM’s Physical Plant Department since June 2008.

“He was a great employee and friend to his co-workers,” said department director Mary Vosevich. “He cared about his customers and was always willing to help them out.”

The Albuquerque-area firefighters who delivered gifts to the Sanchez family Wednesday are part of a non-profit group called Random Acts. The group delivers “random acts of kindness” to area residents in need, based on suggestions from other area firefighters. The group performs about five “random acts” every month, ranging from toy donations for sick children to furniture for fire victims. Random Act’s efforts are funded through donations, and they give firefighters a chance to see a different, more positive side of the tragic events to which they often respond, said the group's director, Steve Vaughan.

“Just a couple of weeks out from such a tragic event, for us to bring that big of a smile to (Magen’s) face, that’s why we do this,” Vaughan said.