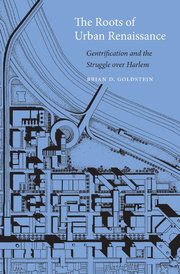 Brian D. Goldstein, University of New Mexico School of Architecture & Planning assistant professor of architecture, has his recent book, “The Roots of Urban Renaissance: Gentrification and the Struggle Over Harlem,” (Harvard University Press), featured in the New York Times Bookshelf on Sunday, Feb. 12. Two other titles about Harlem are also included.

On the Harvard University Press site, the reviewer wrote, “In the post–World War II era, large-scale government-backed redevelopment drove the economic and physical transformation of urban neighborhoods. But in the 1960s, young Harlem activists inspired by the civil rights movement recognized urban renewal as one more example of a power structure that gave black Americans little voice in the decisions that most affected them. They demanded the right to plan their own redevelopment and founded new community-based organizations to achieve that goal. In the following decades, those organizations became the crucibles in which Harlemites debated what their streets should look like and who should inhabit them. Radical activists envisioned a Harlem built by and for its low-income, predominantly African-American population.

In the succeeding decades, however, community-based organizations came to pursue a very different goal: a neighborhood with national retailers and increasingly affluent residents. In charting the history that transformed Harlem by the twenty-first century, “The Roots of Urban Renaissance” demonstrates that gentrification was not imposed on an unwitting community by unscrupulous developers or opportunistic outsiders. Rather, it grew from the neighborhood’s grassroots, producing a legacy that benefited some longtime residents and threatened others.”

Golstein wrote, “Community development, which had once stood for a radical, communitarian and collectivist ideal of the future city, instead came to represent an image of Harlem as a place whose revitalization would proceed from its entrance into a so-called economic mainstream.”

Goldstein is a historian of the North American built environment. His research and teaching focus on the intersection of social movements, political ideology and the built environment. He also addresses the spatial implications of race and class, debates over design expertise and the history of activism in the design professions.

Prior to joining the UNM School of Architecture & Planning in 2014, Goldstein was an A.W. Mellon Postdoctoral Fellow in the Center for the Humanities and the Department of History at the University of Wisconsin-Madison. He received his Ph.D. from the doctoral program in architecture, landscape architecture and urban planning at Harvard University. Previously he worked in the Office of the Chief Architect of the U.S. General Services Administration in Washington, D.C.

Tags: Brian Goldstein School of Architecture & Planning The Roots of Urban Renaissance: Gentrification and the Struggle Over Harlem