Francesca Cavallo, an assistant professor of Electrical and Computer Engineering in the School of Engineering at The University of New Mexico, is working to establish a radical new concept for scaling the operation of traveling wave tubes (TWTs) beyond the microwaves and into THz frequencies.

Cavallo, who also has an appointment at the Center for High Technology Materials (CHTM), was awarded a three-year, $860,000 grant from the Airforce Office of Scientific Research (AFOSR) to develop the new concept. Max Lagally and Daniel van der Weide, scientists at the University of Wisconsin-Madison, are also part of the team conducting this leading-edge work. 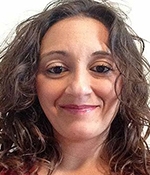 Potential applications of TWTs that operate at mm and sub-mm frequencies include high-spatial-resolution radar and imaging systems; communication with high data rates (5G and beyond); secure wireless communication through broadband mobile-on-the-move technologies using both terrestrial and satellite units; stand-off identification of weapons and explosives; landing aircraft or targeting from aircraft in brownout conditions.

“TWTs are vacuum electronic devices which make satellite communications as well as radio and television broadcasting possible, among the other things” said Cavallo “No solid-state device can provide as much power as a TWT at mm and sub-mm wave frequencies. Nevertheless, application of these devices at frequencies beyond the microwaves is limited by a number of challenges that relate to fabricating devices with the required micro- and nanoscale dimensions to amplify THz radiation.”

Central to the operation of a TWT is a slow-wave structure (SWS) or a helical waveguide. The electromagnetic signal to be amplified is fed into the helix via, for example, a non-linear transmission line. A beam of electrons is accelerated along the axis of the SWS. By controlling the accelerating voltage, the speed of the electrons flowing down the tube is set to be slightly higher than the axial speed of the wave guided down the helix.

“We have invented a way to replace the wire helix that is the central feature of a TWT” said Cavallo. “We are thus able to make micro- and nanoscale diameter structures that are additionally self-winding and mass-producible. We have further developed new ways of testing and qualifying these structures that are potentially more rapid than conventional ones. The upshot is that we can market these helical waveguides to customers who are building high-power, high-frequency amplifiers.”

Cavallo’s approach to miniaturize helical slow-wave structures relies on high-quality nanomembranes or thin slabs of highly conductive materials that spring out of plane and spontaneously form into helices with micro- /nanoscale-diameter and millimeter to centimeter lengths. The target materials are metals and group-IV semiconductors in combination with graphene.

“We're testing a new concept to, to build slow-wave structures,” said Cavallo. “Synthesis, assembly, and investigation of structure-properties relationships of self-winding helices will be performed for the first time in the context of a vacuum electronic device for amplification of THz waves. The project will coordinate design and modeling, device fabrication, and characterization. The modeling effort will yield an accurate predictive evaluation of proposed designs prior to experimental prototyping and testing. Characterization will range from detailed investigation of the structure of the helices to tests of wave propagation in cold (without e-beam) and hot (with e-beam) helices.”

The innovative approach of this work to modeling, realization, and testing of extremely small helical slow-wave structures will provide the DoD and scientific community with a transformative route and knowledge base to develop more advanced travelling-wave tubes (TWTs), ones that scale up in frequency in a manner that currently planned or in-progress approaches cannot.

“We are paving the way to more affordable and low-form factor amplifiers of THz waves” said Cavallo. “These devices will potentially enable applications and discoveries of wide diversity in materials science, warfare, wireless communications, high-frequency electromagnetics, astrophysics, and biomedical sciences.”