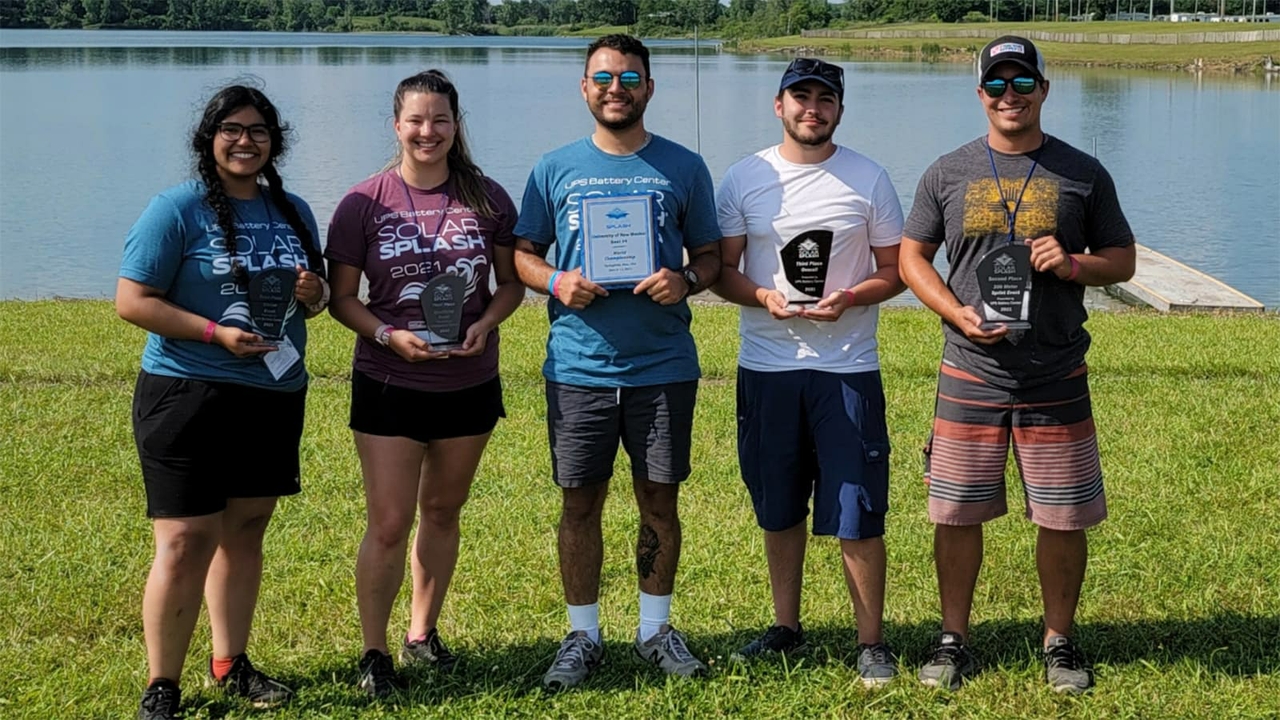 It was a long time coming, but that made the victory even sweeter. After not being able to compete due to the pandemic in 2020, The University of New Mexico Solar Splash team was able to travel to Springfield, Ohio, and garnered a third-place victory overall in the national Solar Splash contest, held June 8-12.

The third-place overall victory was UNM’s best overall result since they began competing in 2016.

UNM was among nine solar-powered boat teams from colleges and universities around the country to compete. The field this year was considerably smaller, due to several teams having to withdraw because of COVID-19 issues.

The team is led by faculty advisor Peter Vorobieff, professor of mechanical engineering, which he has been leading since UNM began competing in the event in 2016. Despite his continued involvement, he says the team members deserve all the credit, having to design, build and compete in the extraordinary circumstances of a pandemic that has made life challenging on many fronts.

“The UNM student team deserves recognition for overcoming huge obstacles and delivering outstanding performances, including placing second in solar sprint and edging out the multiple-time national champion (Cedarville University) by more than 1.5 seconds,” he said.

In 2019, the team placed fourth overall and won the Teamwork Award for best-coordinated group effort.

The team was planning to compete in 2020, then the pandemic forced the closure of labs and the cancellation of the competition. However, the Solar Splash team had still made significant progress before the pandemic and continued that work after the labs opened up again last summer. This resulted in big changes on the boat from the last time they went to competition.

Among the improvements to the boat made in 2020-21 were building a new wooden hull that was designed, built and tested by the team originally led by Karl Foster. Unfortunately, since the 2020 competition had to be canceled, Foster never got to compete. The hull is made out of quarter-inch plywood and coated in fiberglass. It follows an ultra low-drag wave splitter design, with its shape inspired by Viking longboats and determined by a student team that conducted both numerical modeling and small-scale validation experiments.

The team also acquired a more powerful motor to improve sprint times and received high-performance solar cells from SolAero Technologies to build a new solar array for the boat, much lighter than the 2019 array, putting out 528 watts of power on a sunny day.

Sponsors of the UNM Solar Splash this year were UNM, Sandia National Laboratories, IEEE, ExxonMobil, PNM and the Menicucci family.

Vorobieff also said he appreciates the efforts of Seth Townsend and his partner at UNM Police, who located the trailer used to transport the boat across the country after it went missing. “They found our trailer, and had they not done it, we would not have gone anywhere.”

Solar Splash is funded almost entirely through donations. Donations to Solar Splash can be made here.