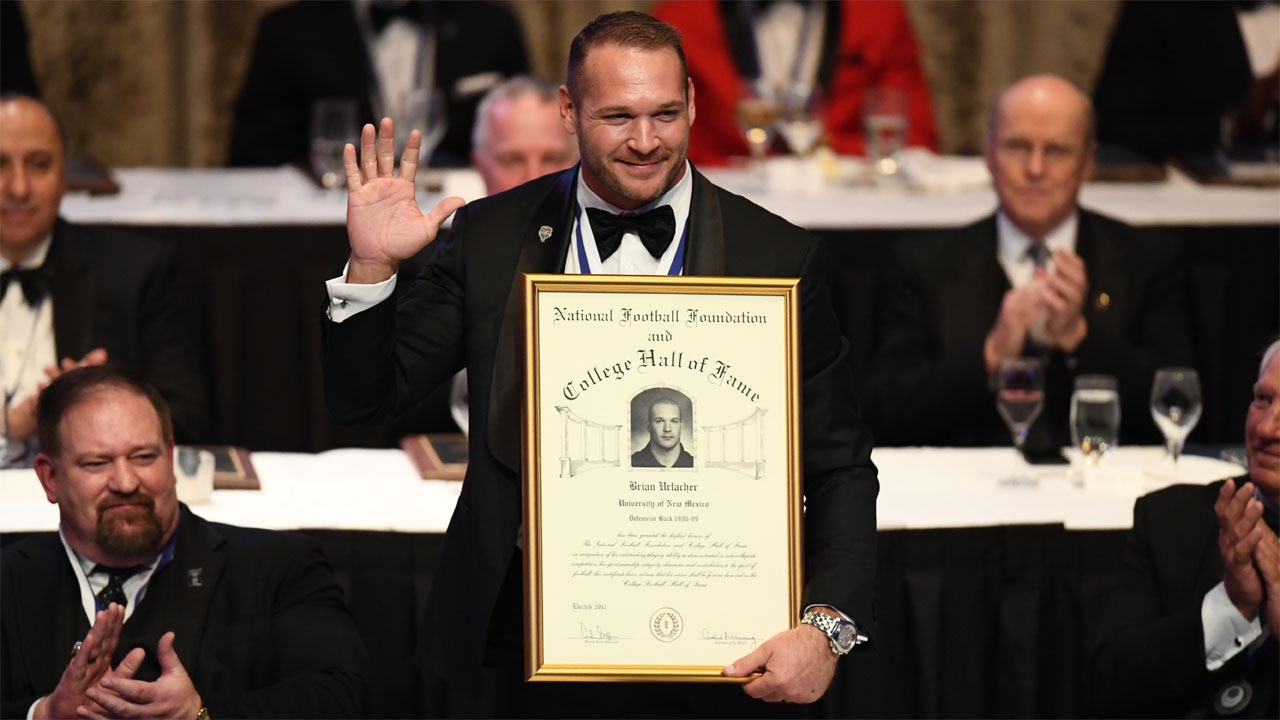 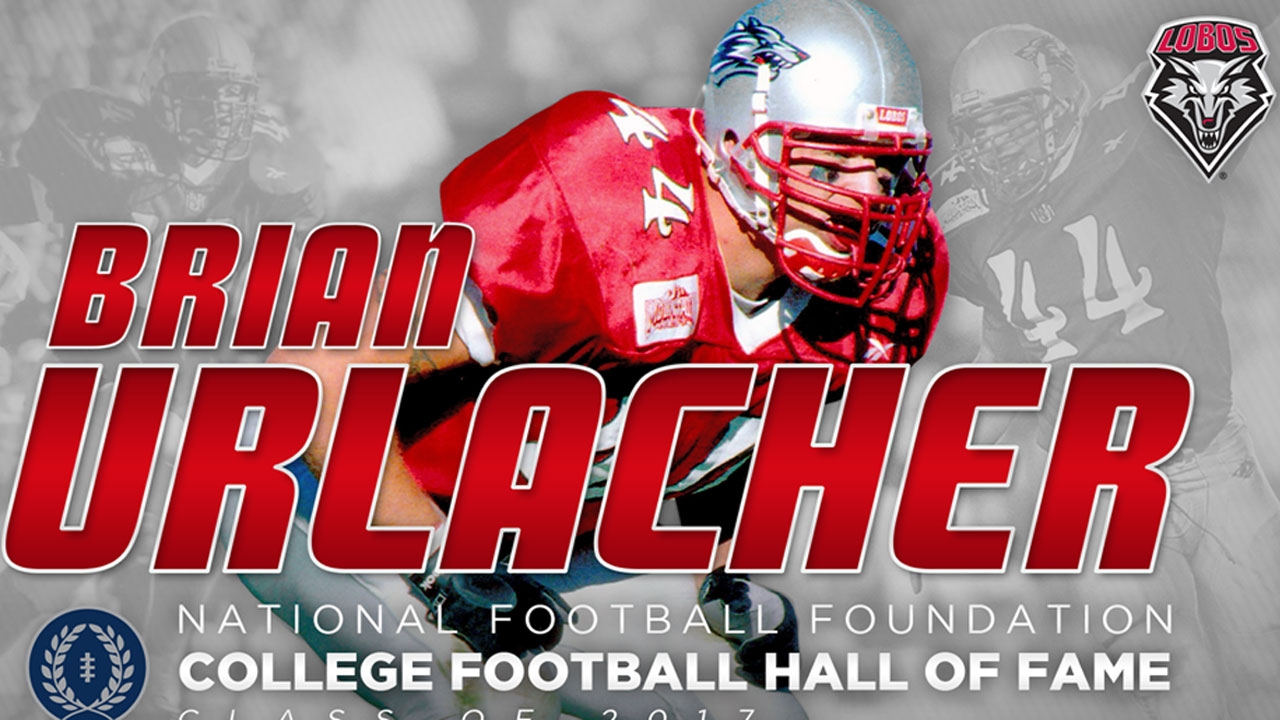 Brian Urlacher is the first Lobo football player to be inducted into the NFF College Football Hall of Fame.
Credit: UNM Athletics 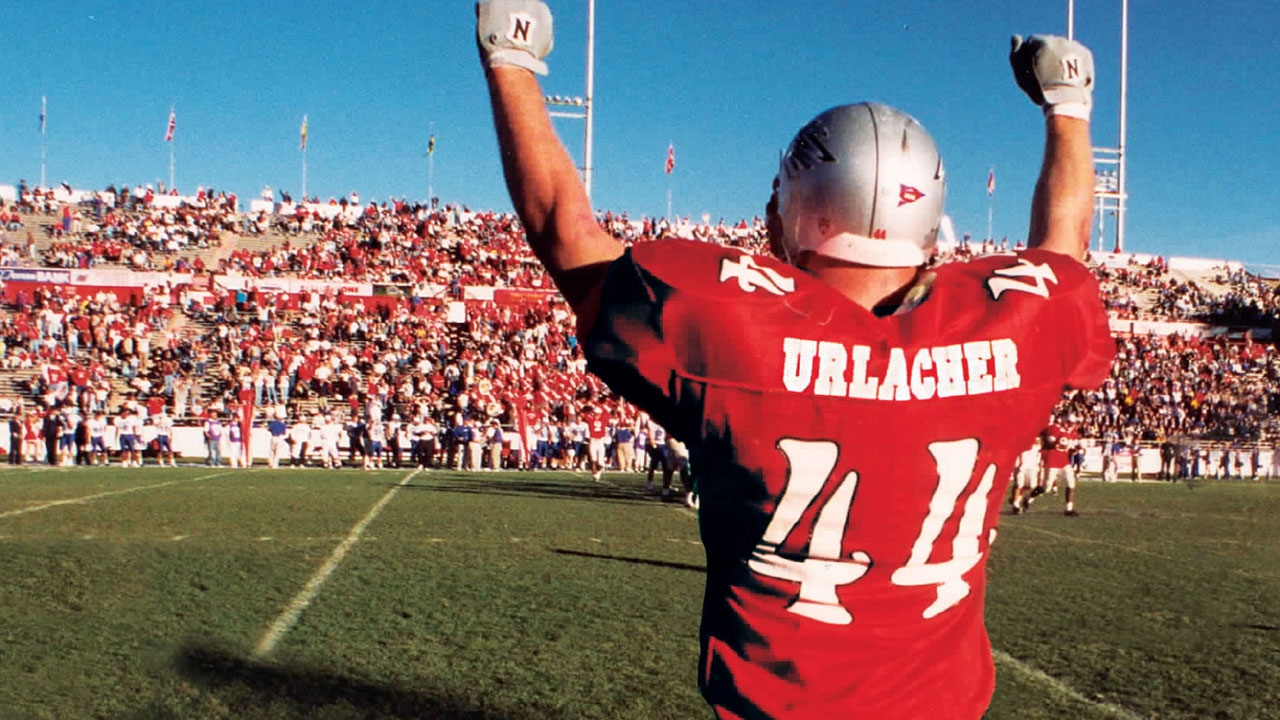 For a guy who brought his lunch pail everyday to practice, first at Lovington High School and then for The University of New Mexico, the black-tie affair fit Brian Urlacher perfectly. The New York Hilton Midtown's Grand Ballroom played host to Urlacher and an all-star cast of history's greatest football legends and the sport's most promising student-athletes during the 60th National Football Foundation (NFF) Annual Awards Dinner Tuesday night.

A celebrity-laden College Football Hall of Fame class took center stage at the event during their formal induction, and 13 of the game's current-leading student-athletes collected $241,000 in postgraduate scholarships as NFF National Scholar-Athletes. The festivities began with the announcement of Virginia's Micah Kiser as the recipient of the 28th William V. Campbell Trophy®, presented by Fidelity Investments, as the top football scholar-athlete in the nation, and the evening culminated with powerful speeches from Hall of Fame inductees Peyton Manning and Coach Steve Spurrier, responding on behalf of the 2017 class.

A packed house of 1,600, including more than 80 current collegiate head coaches and 40 returning Hall of Famers attended the event, which took place at its new venue after a 58-year stint at the Waldorf Astoria. ESPN's Joe Tessitore entertained the crowd as the emcee for the annual celebration, which lived up to its historic role of bringing the college football community together at the end of the regular season to pay tribute to the game and its greatest legends.

Urlacher had a brilliant four-year career for the Lobos under Dennis Franchione and Rocky Long who both attended the ceremonies in New York. Urlacher mostly played the hybrid "Lobo" back, which was a cross between a linebacker and a free safety. The Lovington, N.M., native played from 1996-99, earning All-America honors in both 1998 and 1999, including being named a Concensus First Team All-America in 1999 after one of the greatest seasons in Lobo history.

"It's a huge honor. Like I said, we've had some great players. People don't really know about the players we've had. We've had some really good players at UNM. To be the first guy to go in is a huge honor. And with this class, most of these guys I watched either when I was in college as a kid or even in NFL.

In 1999, Urlacher not only won Mountain West Defensive Player of the Year, but he was a three-way superstar, playing wide receiver and returning punts. How good was he? Urlacher led the team in tackles with 154, with forced fumbles with five, with recovered fumbles with three, with pass breakups with seven, and then he also led the team with seven touchdowns, 42 points and with a 15.8-yard average on punt returns.

Overall, Urlacher's 442 career tackles was good for fourth all-time at UNM, and his 11 forced fumbles are second. He also was a three time WAC/Mountain West Player of the Week. In 2013, Urlacher's number 44 was retired, the fourth such honor to be given to a Lobo football player.

His brilliant collegiate career at UNM led to his selection in the 2000 NFL Draft, where he was the ninth overall selection, selected by the Chicago Bears. He would go on to have a brilliant 13-year career in Chicago, starting 180 of 182 games and setting a franchise record with 1,353 tackles, including 153 in 2002, which is still a Bears single-season record. He also recorded five touchdowns in his career along with 41.5 sacks, 22 interceptions and 12 forced fumbles.

At a Tuesday morning press event, Urlacher talked with Holly Rowe about becoming the first member of the Lobos to earn enshrinement in the Hall of Fame.

"It's a huge honor. Like I said, we've had some great players. People don't really know about the players we've had. We've had some really good players at UNM. To be the first guy to go in is a huge honor. And with this class, most of these guys I watched either when I was in college as a kid or even in NFL. I was a teammate of Adrian Peterson. I watched him in college tear it up. So when he got to the Bears, I was excited to have him. He's the real Adrian Peterson, in my opinion."

Urlacher was also quick to give praise to his former coach Rocky Long, himself a former Lobo player, for allowing him to be as versatile as he was in college.

"The opportunity I was given by Coach [Rocky] Long, I think, to let me do all those things ... you're kind of specialized into one position. And Coach Long didn't do that. He let me do everything. Plus, we didn't have a lot of guys who could return kicks. So I was the guy that got stuck back there doing that. Just the opportunity to do all those things. It was a blast. I had a great time in college. And UNM was the only scholarship that I had -- opportunity I got to go to college. So it was a very easy decision to go there, but the opportunities were great when I got there."

The 10 players and three coaches bring the total number of players in the Hall of Fame to 987 and the number of coaches in the Hall to 214. Spurrier, just the fourth person ever to be inducted into the Hall as both a player and coach, responded on behalf of the 2017 College Football Hall of Fame coaches and touched on how important the honor is to all of the coaches.

"Thank you, I appreciate it for all of us and we thank the committee for our selection into the national College Football Hall of Fame," said Spurrier. "It's really maybe the ultimate honor for all of us college football coaches to be recognized as amongst the best. And there's been so many super great coaches all through the years."

He ended his speech with a simple message about the game: "College football, it's the greatest thing ever invented!"

Peyton Manning, Tennessee's all-time leading passed and just the second Campbell Trophy® winner to join the Hall of Fame, delivered the response on behalf of the 2017 College Football Hall of Fame players. Manning touched on the great honor of the Hall, his personal story of attending his father, NFF Chairman Archie Manning's induction as a kid and had personalized messages for each of his fellow inductees. Peyton ended his speech with a message about the importance of the game of football.

"Football has given each of us a gift and ultimately put our individual universes in motion," said Manning. "Now it's up to the class of 2017 to carry on the legacy of the game, including the valuable life lessons it teaches. It's up to us to live up to what it really means to say 'I'm a football player' and 'football matters.' Loving this sport is much more than donning shoulder pads and helmet to run on the field. Loving the college game includes sacrificing, the simple pleasures of being just a student in exchange for the rigors of being a true student athlete.

"Throughout television and its stadiums nationwide, fans see dramatic moments on the field," he continued. "But off the field, what they don't see are the caring and human connections that forge indelible bonds amongst our teammates. All 13 of us up here love this game. And tonight it's proof that the game loved us back. God bless you and God bless football."