The book takes a clear-eyed look at the way governments have used accounting practices to mislead the public and manipulate perceived objectives from the Crimean War conducted by the British in the 19th century to the 21st century war on terrorism currently being conducted by the United States.

The authors use a variety of examples to show how governments screen reality for popular consumption by speaking in accounting terms rather than in social or human terms. Chwastiak utilizes an obscure civil court dispute over payment for service to pull aside the bureaucratic cloak.

This story only became public she says, because arguments over accounting are boring.

Putting torture and kidnapping into dollars and cents
In 2009 Richmor Aviation sued Sportsflight Air Inc. in court over a billing dispute. Richmor and Sportsflight were subcontractors for the Central Intelligence Agency’s extraordinary rendition program.

In the book, Chwastiak explains how extraordinary rendition began when U.S. President George Bush signed a Memorandum of Notification six days after the World Trade Center was destroyed in 2011. It gave the CIA the authority to set up a program to capture al Queda operatives and question them.

Richmore received a contract because the proprietary company set up by the CIA, Aero Contractors, did not have the capacity needed to fly detainees to prisons around the globe to be interrogated. The CIA hired DynCorp, a private military contractor for the extraordinary rendition flights. Dyncorp subcontracted to Sportsflight which subcontracted to Richmor.

Richmor initially entered a six-month contract with Sportsflight for 250 flight hours, whether or not the hours were used. Richmor provided exclusive use of a luxury Gulfstream IV jet normally used by sports and entertainment figures.

Richmor contended at the end of the contract a verbal agreement guaranteed a minimum of 50 flight hours per month as long as Sportsflight continued to charter the jet. Richmor billed Sportsflight for $1,119,650 for unused hours. Sportsflight refused to pay. The dispute went to court.

Sportsflight’s lawyer argued that Richmor was seeking the additional compensation to make up for negative publicity once it became clear that Richmor was a subcontractor for CIA extraordinary rendition flights.

In lawsuits filed on behalf of the victims of extraordinary rendition, the U.S. government intervened using the “state secrets privilege.” In this case, by the time government representatives realized what was happening, more than 1,700 pages of information had been made public as part of the court proceeding.

Chwastiak argues that this demonstrates how accounting can make every, including kidnapping and torture, appear mundane."In the court case they were arguing accounting. And never once was there an inkling of what was going on below the surface. These companies were supporting kidnap and torture," Chwastiak said.

In court Richmor executives said they were contracted to transport government personnel and their “invitees.” Chwastiak quotes author J. Mayer from her book “The dark side: the inside story of how the War on Terror turned into a war on American ideals.”

At no time during the civil trial was there discussion of the purposes of the flights. Accounting allowed the plaintiffs to argue about billable hours and money owed without examining the kidnapping and torture that created the profit and loss.

Hidden Costs of War
Another chapter of the book, “Rendering Death and Destruction Visible: Counting the Costs of War,” examines how the U.S. Department of Defense budget only accounts for short-term expenditures.

“The trillion dollar defense budget for Iraq was just for ammunition and things like that. It does not include long term-costs like VA benefits or things of that nature,” she says.

Only including short-term expenditures in the war budget makes violence more politically acceptable, in that it hides future costs which can be several times larger than current costs, and the social costs of war. Death, injury, psychological wounds, and physical as well as societal destruction are not accounted for in war budgets.

Chwastiak is one of the few U.S. experts in her field. She has written extensively on war accounting, and more recently on the ways torture can be spoken about in accounting terms that remove people from the reality. She says she is drawn to subjects that normalize abhorrent behavior.

UNM students who want to be challenged can learn more about cost accounting and the ways it can be manipulated in MGMT 346, a course offered in the Anderson School of Management. She says she often requires students to write about the costs that are not accounted for in the course of business. 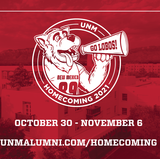 Dîner en Rouge is back to celebrate UNM homecoming