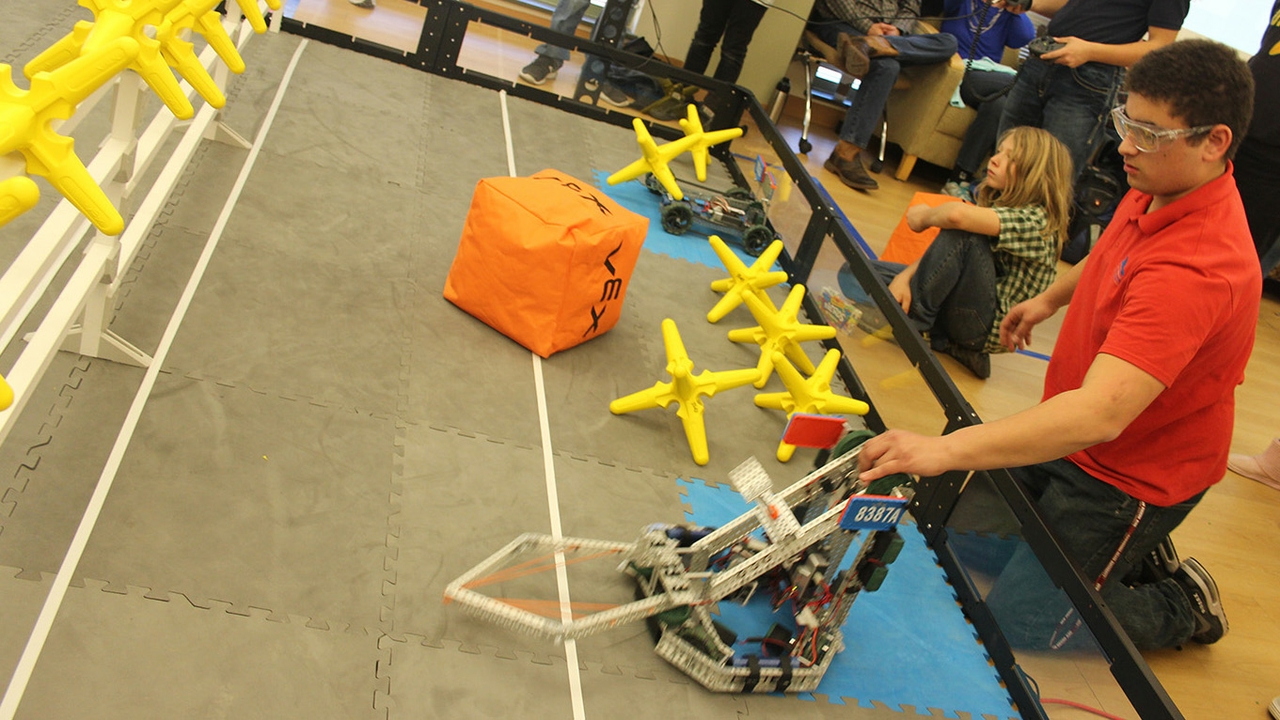 Teams of elementary, middle and high school students from across the state will gather at The University of New Mexico on Jan. 27 for the VEX Robotics Competition, sponsored by the UNM School of Engineering.

The competition will be held at the Centennial Engineering Center at UNM. Qualifying rounds will take place from 9:30 a.m. to 2:45 p.m., and elimination rounds and finals will be 2:45 to 4:30 p.m.

About 30 teams will come together and battle against each other with robots created from the VEX EDR design curriculum. Younger students will scrimmage using their VEX IQ robots in a game called “Ringmaster.”

Using robots they designed and built, the older participants will square off in a game called “In the Zone,” where robots score points by stacking cones on high posts. The teams complete the challenge by having their robots move the cones to designated spaces, then park on specific tiles.

The UNM student chapter of National Society of Black Engineers will provide snacks and lunch as part of their fund-raising efforts. Volunteers from UNM, Sandia National Laboratories and other groups are also essential to keeping the games going.

Central New Mexico robotics has been greatly advanced by the efforts of Chaushie Forster, a teacher at Garfield STEM School who has organized a VEX league in Albuquerque. This has allowed teams to practice before the competitions at UNM and NMSU.

The UNM School of Engineering’s VEX Robotics Competition is one in a series of tournaments supported by the Robotics Education and Competition Foundation and various national, regional and local sponsors.

This event is one of a series of tournaments taking place internationally throughout the year. VEX competitions are recognized as the largest and fastest-growing competitive robotics programs for elementary schools, middle schools, high schools and college aged students around the world. VEX competitions represent over 20,000 teams from 45 countries that participate in more than 1,500 VEX Competition events worldwide. The season culminates each spring with the highly-anticipated VEX Robotics World Championship, uniting top qualifying teams from local, state and international VEX Robotics events to crown world champions.

The VEX Robotics Competition is managed by the Robotics Education and Competition Foundation and serves as a vehicle for students to develop critical life skills such as teamwork, leadership and project management, honed through building robots and competing with students from the community in an exciting, non-traditional environment. The VEX Robotics Design System was built from the ground up and designed to be an affordable, accessible and scalable platform used to teach science, technology, engineering, and math education worldwide.