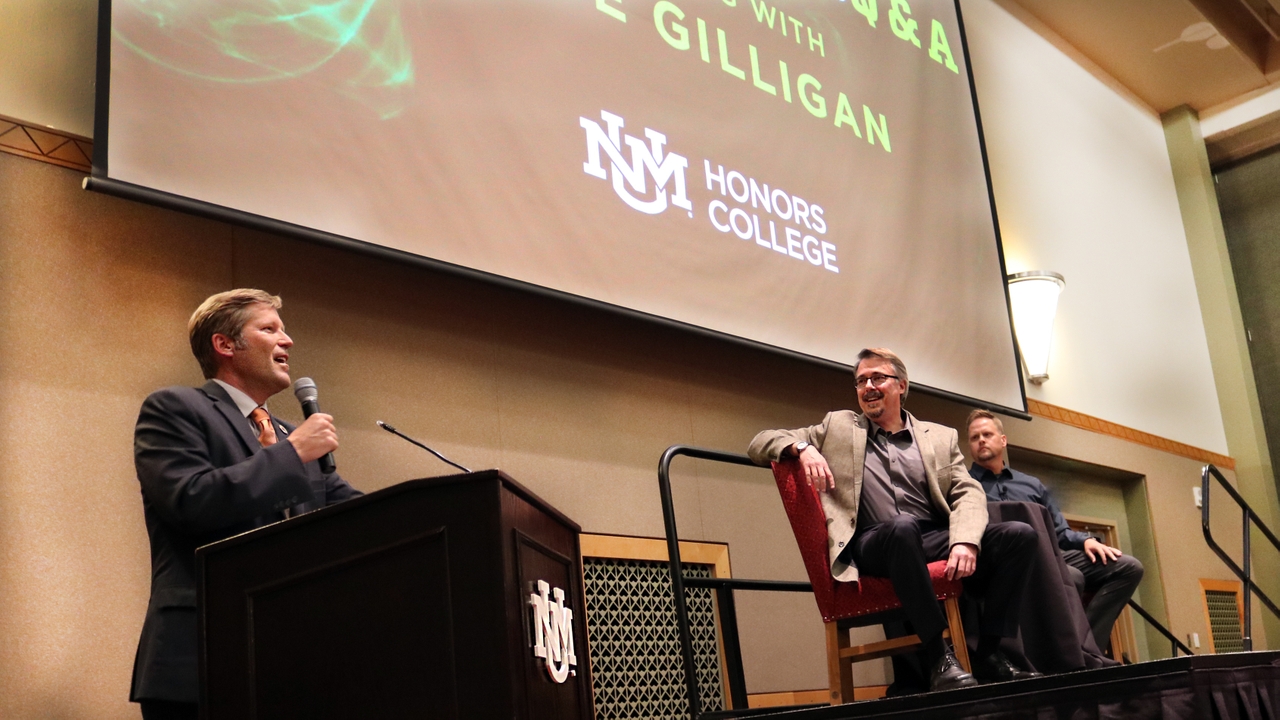 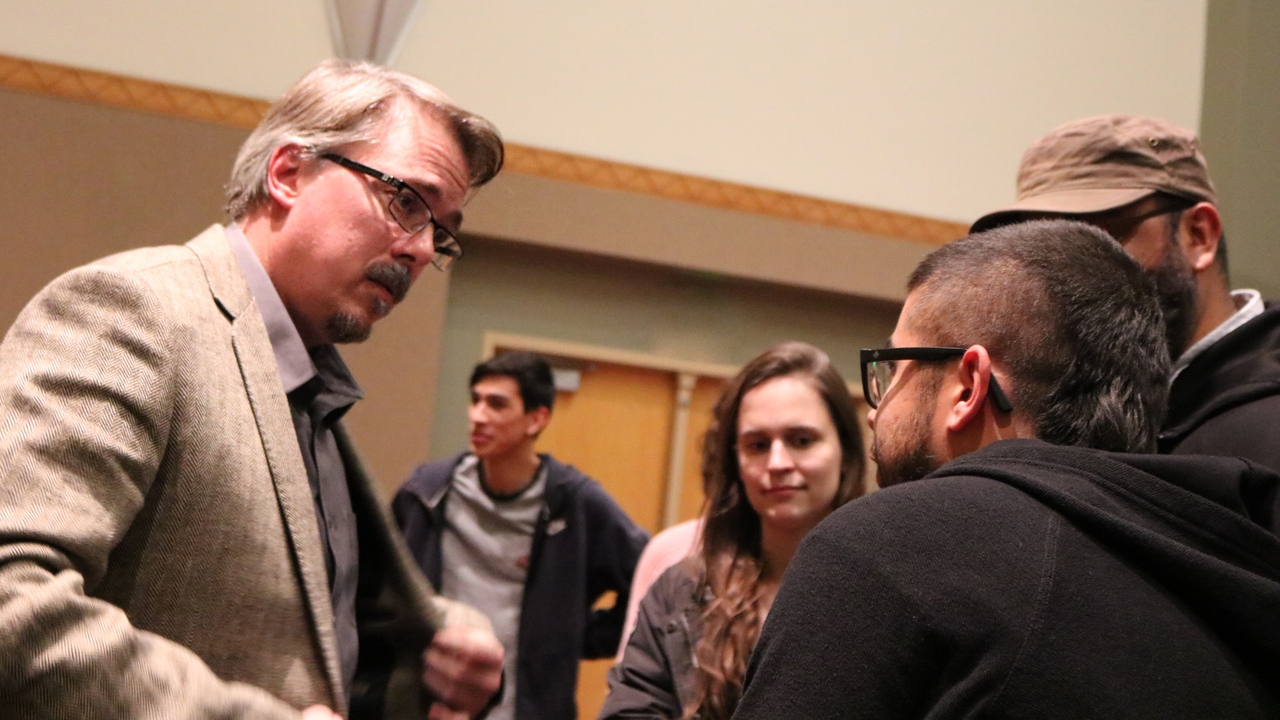 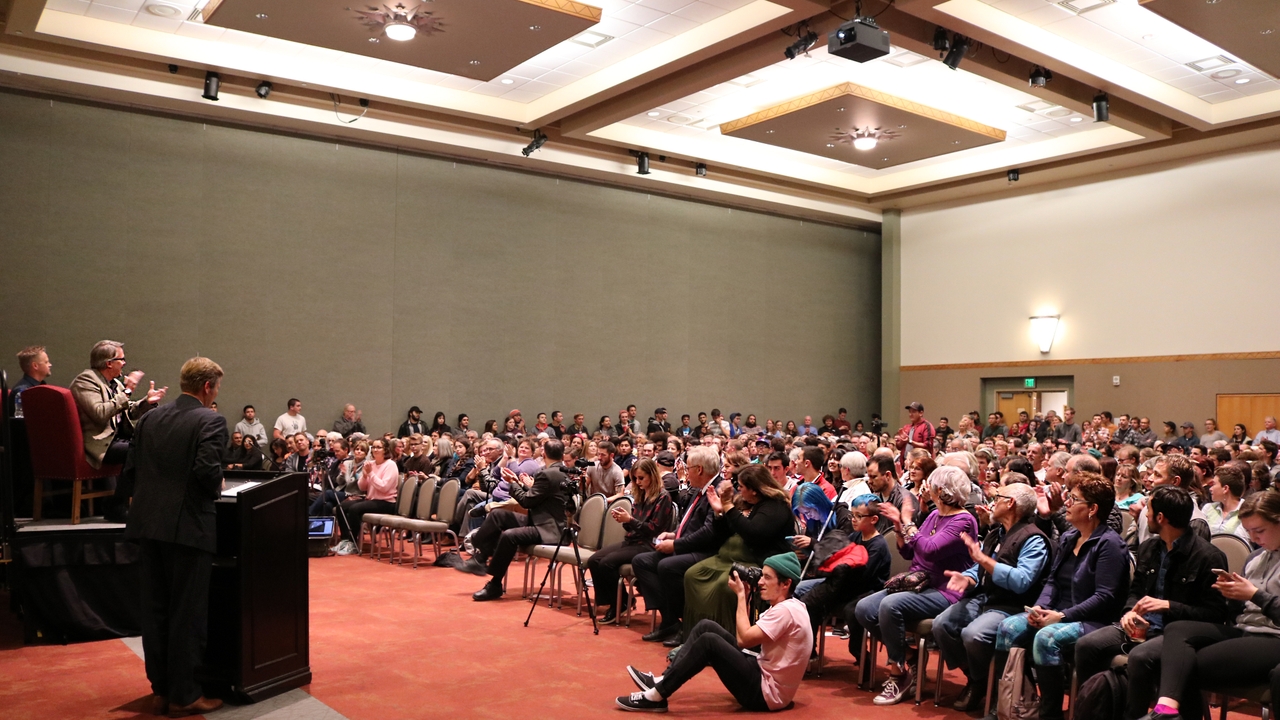 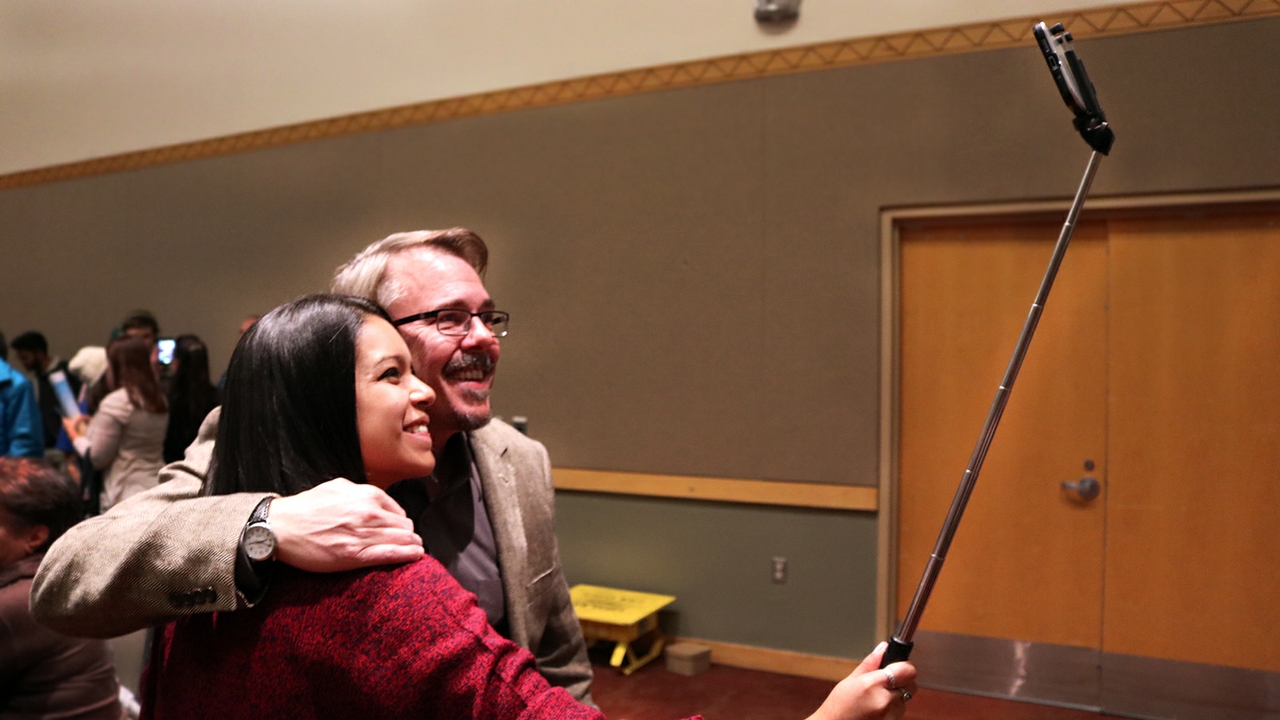 Vince Gilligan and a UNM student take a selfie

Vince Gilligan on filming in the Land of Enchantment

Spike Lee and Brooklyn. Alfred Hitchcock and London. Jean-Luc Godard and Paris. Cinematic history features a number of filmmakers who are synonymous with the cities where they weaved their movie magic. In the world of television, one pairing undoubtedly shares that distinction: Vince Gilligan and Albuquerque.

For the past decade, Gilligan has been working steadily on his hit TV shows, Breaking Bad and Better Call Saul, bringing Albuquerque and New Mexico into the public consciousness like never before. As part of the Honor’s College Carruthers Lecture Series, Gilligan recently visited The University of New Mexico (UNM) campus to discuss his connection to Albuquerque and New Mexico, highlighting his love for the singular landscape and cinematic vistas.

Gilligan was introduced by Albuquerque Mayor Tim Keller, who declared, “We’re a gritty city, but we’re a special city, and we have a story to tell.”

Prior to Breaking Bad, Gilligan confessed that his only exposure to New Mexico was during a cross-country drive from his home state of Virginia to Los Angeles, where he was slated to start work as a staff writer on The X-Files. He told the standing-room-only audience at UNM that his biggest mistake was driving through Albuquerque and not getting off the freeway.

“You can’t see much from up there,” Gilligan said. “Maybe an Applebee’s, a TGI Friday’s… It’s only when you go down into the streets (of Albuquerque) that you really see all the unique character and culture this city has to offer.”

As for how Breaking Bad ended up in the Land of Enchantment, Gilligan gives credit to the Sony production executives who had the idea to film in New Mexico. Originally, Breaking Bad was conceived to take place in the inland empire, just east of Los Angeles.

“That’s just because I wanted to sleep in my own bed at night while we were making the show,” Gilligan confessed, “but New Mexico was wonderfully hospitable to filmmakers – and still is to this day – and offered a financial incentive… they made Sony an offer we couldn’t refuse.”

Gilligan asserts that the change in venue was the best thing that could’ve happened to the show, and that the exceptional atmosphere of this region made a world of difference.

“New Mexico in general and Albuquerque specifically are the perfect setting for Breaking Bad,” Gilligan said. “Not because of the meth aspect, but because it’s a very cinematic place. It looks amazing on film. The Sandias to the east, and the amazing endless skies with the big, puffy white clouds, and the prairie and the desert... It looks like the perfect place to shoot a western, and Breaking Bad turned out to be something of a contemporary western, in large part because of the environs in and around Albuquerque. It was really the greatest bit of happenstance that could’ve occurred. It made the show better.”

During the 90-minutes or so that Gilligan spoke to a rapt audience, he also shared Hollywood battle stories, like the years between his work on The X-Files and finally securing a deal for Breaking Bad. They were years of rejected pitches and failed attempts to sell original television show ideas. They were also what Gilligan called some of the most educational years of his life.

“Everyone tries to avoid failure,” Gilligan said. “I shouldn’t speak in absolutes, but generally you learn more from failure than success.”

Gilligan also mentioned that the idea for Better Call Saul started as a joke on the set of Breaking Bad, when a crew member started asserting that they would realize certain story ideas “when we do the Better Call Saul spinoff.” A precursor to the world of Breaking Bad, the series serves as an origin story for Saul Goodman, a lawyer of questionable morals who ultimately becomes tangled in the web of anti-hero Walter White.

The Q&A session attracted an audience beyond the TV and filmmaking community. UNM junior TJ L'Esperance studies Political Science, and having the chance to shake Gilligan's hand meant a lot to him.

"Vince Gilligan was very approachable and modest. He didn't make me nervous to talk to him and was interested in what we were doing here at UNM," L'Esperance said. "It was great to hear his input on what makes Albuquerque and New Mexico special, especially since it is coming from someone like him: with the perspective of a non-local and a good deal of prominence."

Much like his first foray into New Mexico filming, Gilligan embraces the scenery and ambience of Albuquerque and surrounding areas as though they’re characters on the show. Gilligan claims, however, that he doesn’t have to do much to make that happen; the atmosphere and overall feeling of the city speaks for itself.

“The (other) smartest thing we did,” Gilligan told the UNM audience, “was to say we’re not going to change the license plates and never point the camera east toward the Sandias. We’re going to make it Albuquerque.”

This year’s Carruthers Lecture Series theme, My New Mexico, was selected to begin a multifaceted exploration of ideas and questions about New Mexico that can be examined together as a community in the upcoming year of Carruthers programming. Learn more at: honors.unm.edu