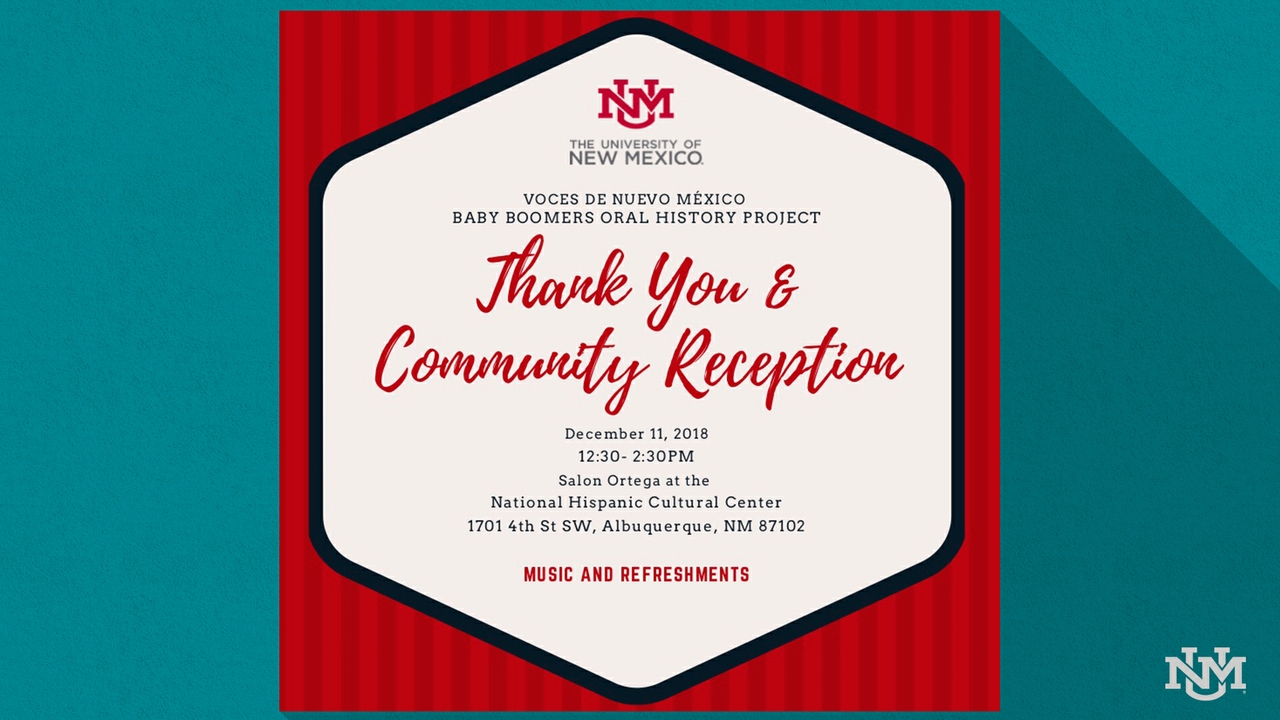 The Voces de Nuevo México project focuses on native Hispano Nuevo Méxicanos born between the years 1942 and 1967. The study intends to gather the stories of New Mexicans to ensure their histories are not lost over the years.

Both Gómez and Nogar agree there needed to be more value placed on the experiences New Mexicans lived through even saying, “Often, the most interesting and consequential histories, stories and historias are the ones surrounding us, but we have to be reminded that they are there, to listen to them and to recognize the value in them, even when they are not always perceived as worthwhile from without (or even within) the community.”

What: Presentation of findings

Where: Salon Ortega at the National Hispanic Cultural Center located at 1701 4th Street S.W. Presentation is open to the public.

The Baby Boomer Generation
Prior the Voces de Nuevo México project, the scholarly research on traditional cultural practices of New Mexico and its native inhabitants were slim and focused mostly on generations born prior to World War II. There were no published studies that focus on the histories of the “Baby Boomer” generation in New Mexico who were born between the early-to-mid 1940s through the mid-1960s.

Undergraduate Research
The Voces de Nuevo México project is unique not only in the research aspect, but also with who the researchers are. This oral history project currently has 34 undergraduate and one graduate student working on the project.

While the number of students working on research projects varies based on the type of project, the Voces de Nuevo México project definitely has a larger number of undergraduate researchers than a typical oral history project.

It was important to Gómez and Nogar that they created a collaborative course that gave students the interdisciplinary skills necessary for ethnographic research and empowers them to use these skills and the related technology when conducting research.

Gómez and Nogar have high hopes for the impact of the Voces de Nuevo México project saying, “We hope this project can serve as an example for other faculty members interested in involving students in large-scale research projects and cross-college humanities research collaboration. We also hope this project can help establish an Oral History Center at UNM.”

The Voces de Nuevo México Baby Boomer Oral History Project will be presenting their findings thus far on Dec. 11 from 12:30-2:30 p.m. at the Salon Ortega at the National Hispanic Cultural Center.

This event is open to the public. The National Hispanic Cultural Center is located at 1701 4th Street S.W.