A new paper by UNLV Geoscience graduate student Jon Baker has hot implications for the climate future of Russia.

Baker, working with UNLV Geoscience Professor Matthew Lachniet and colleagues Yemane Asmerom and Victor Polyak at The University of New Mexico, and Russian colleagues, have produced an 11,000 year-long climate record from the Ural Mountains of Russia that shows nearly continuous warming from the end of the last Ice Age to the present.

The paper was published in the May 22, 2017 issue of Nature Geoscience, the top journal dedicated to the Geosciences. 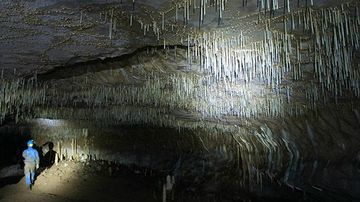 Kinderlinskaya Cave, in the Ural Mountains of Russia, showing soda-straw stalactites draped from the roof and stalagmites growing upward from the cave floor.

“The contradiction in temperatures trends between this new finding and previous work is likely due to the fact that previous studies neglected to include records that were most sensitive to winter temperature variations, and focused too heavily on summer temperatures for this region,” said Baker.

Baker, who is expected to defend his PhD dissertation at UNLV in the summer of 2017, showed that disappearing ice in the Arctic regions of North America controlled the warming trend as the Ice Age glaciers disappeared. Later, rising greenhouse gases, like carbon dioxide and methane, were likely responsible for the continued warming in the Ural Mountains.

“The cave climate record has important implications for future climate," said Lachniet. "Because greenhouse gas concentrations are increasing at rates unprecedented for the past 800,000 years, human-caused warming will be superimposed on the ‘natural’ trend." 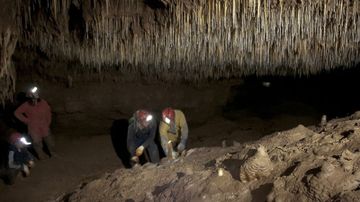 Baker added “This will mean even more rapidly warming winters for continental Eurasia, than has been documented by the new record, leading to the loss of winter-time snow cover, with potential climate impact throughout the northern hemisphere”.

The climate history was based on a cave stalagmite deposit from Kinderlinskaya Cave, collected while Baker was a Fulbright Fellowship recipient to Russia from the International Education Institute.  The research was also supported by the Ralph Stone Fellowship of the National Speleological Society in 2013.

“This new contribution, involving US scientists at UNLV and UNM and colleagues from Russia, demonstrates the value of interdisciplinary international collaborative work,” said Asmerom.

The data were obtained using state-of-the art geochemical techniques at the Las Vegas Isotope Science Laboratory at UNLV and the Radiogenic Isotope Laboratory at the University of New Mexico. Both facilities were supported by infrastructure grants from the National Science Foundation.