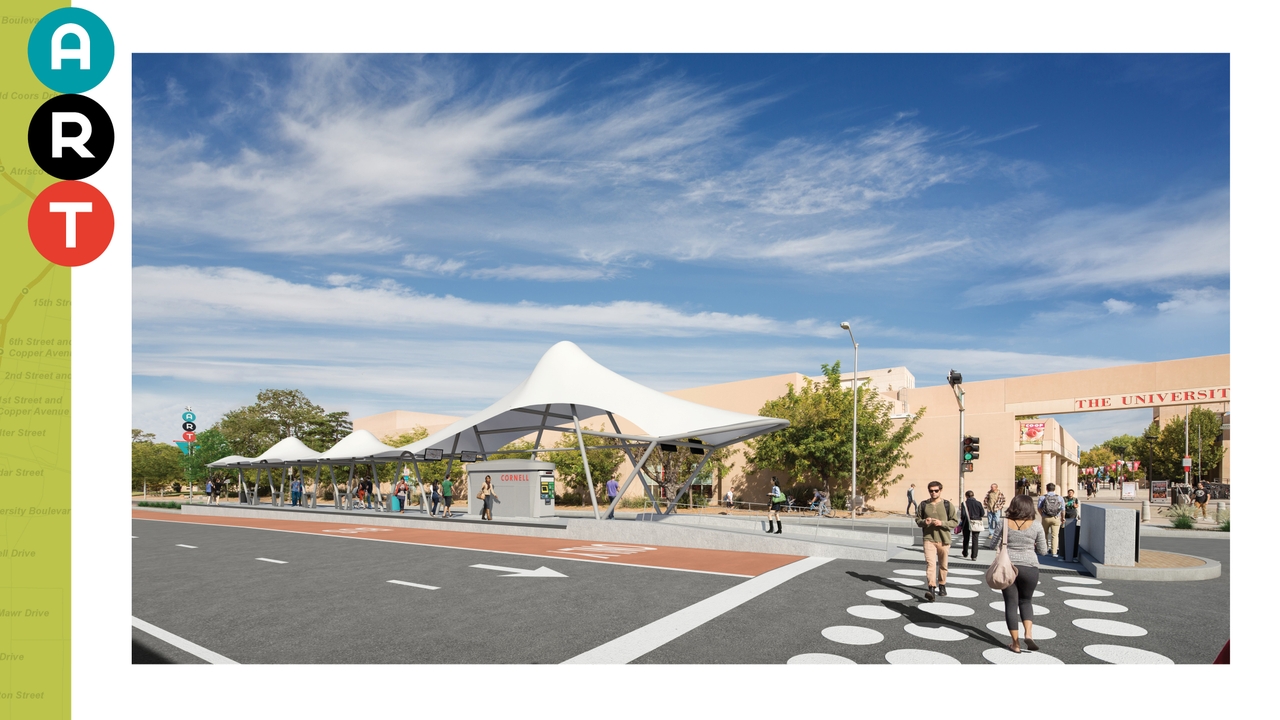 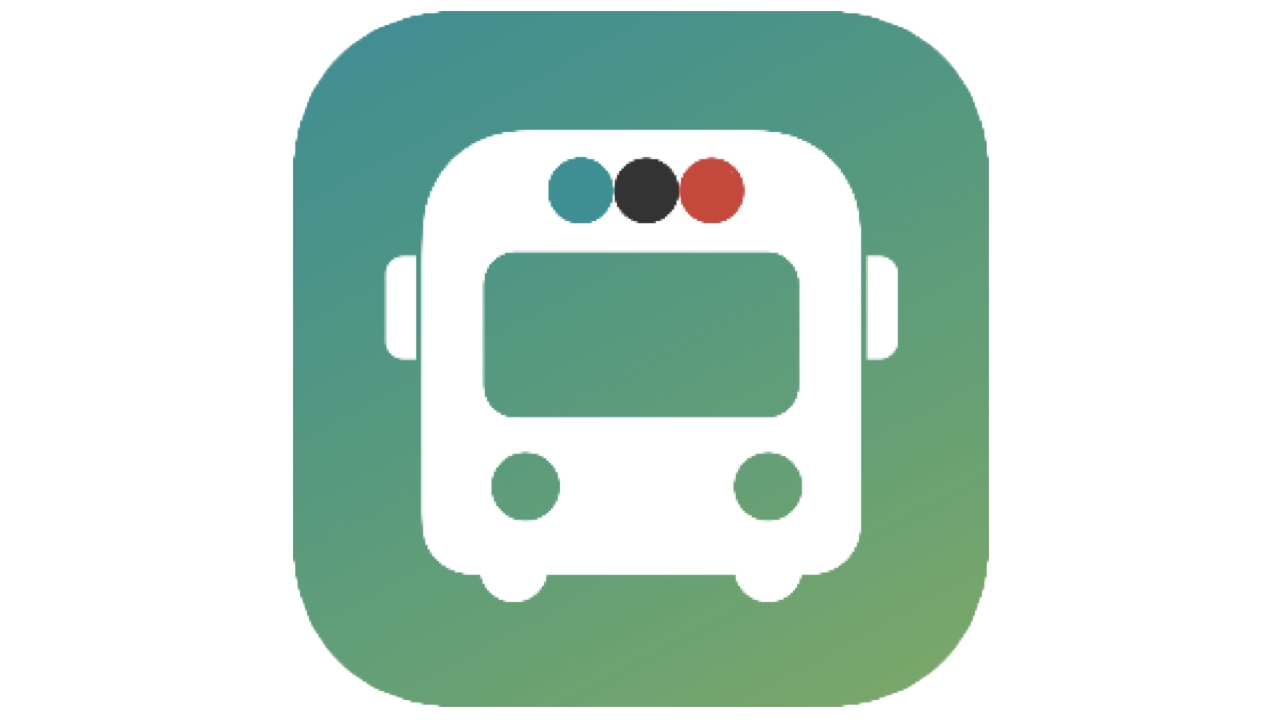 Includes a complete list and map of ART bus routes, nearby businesses, bus tracking features and many other useful links. 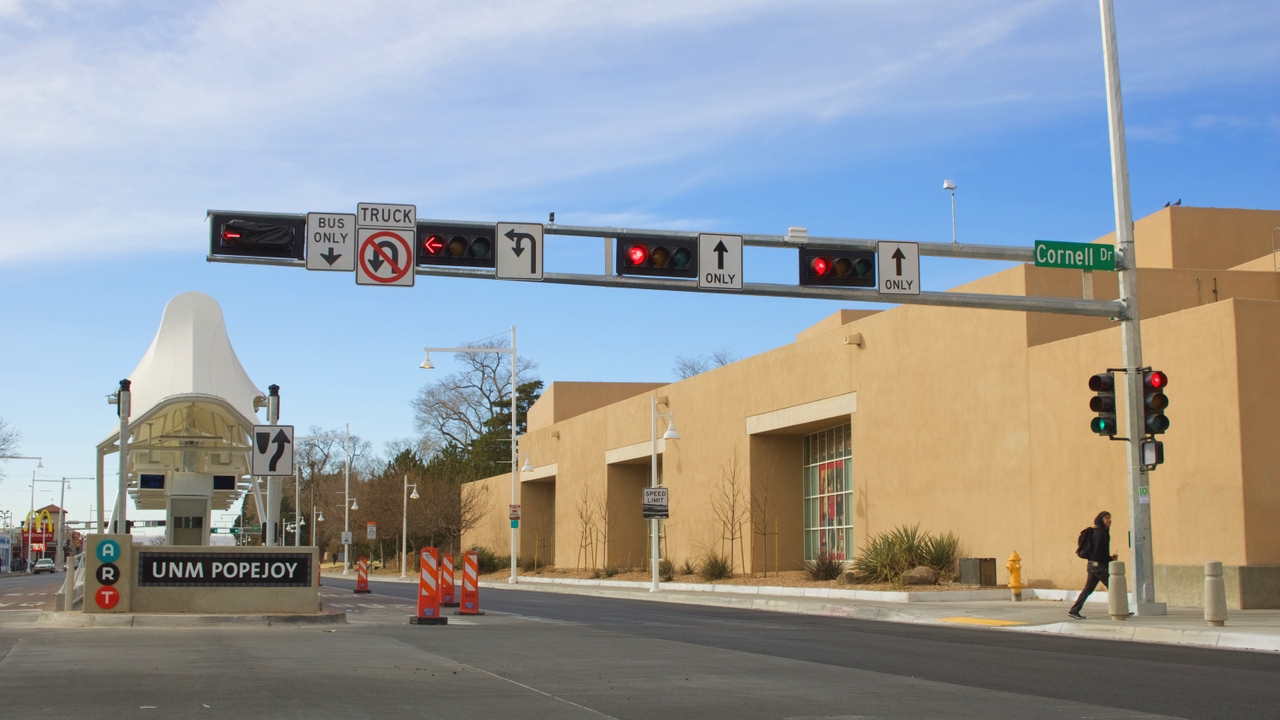 While flashing red, drivers may continue if there aren't pedestrians crossing. 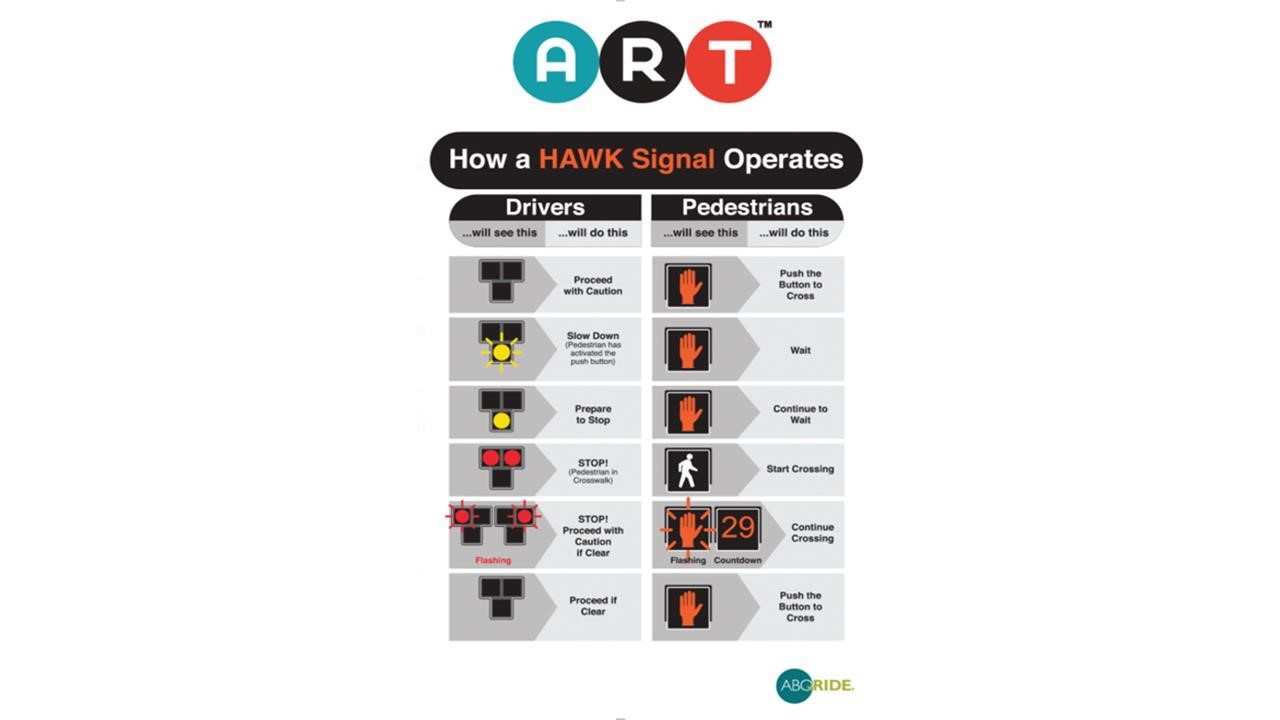 Changes can already be seen on Central Ave.

The signals viewed by pedestrians will be similar to current standard traffic crossing signals. Pedestrians will view a “walk symbol,” featuring a stick figure, and an orange “stop” symbol, featuring the palm of a hand indicating “stop.”

Driving next to ART
There are also changes on Central Ave. for motorists.

ART security features
Stations are elevated, well lit, easily visible and have four security cameras. ART Stations and buses are cleaned daily and patrolled by Transit Security officers during all hours of operation. Each station will also have an emergency 911 button in case of an emergency.

Route
ART will route from Coors to Louisiana while stopping at stations located in the median. Outside of the ART corridor, ART routes north to Unser Transit Center, east of Louisiana to Tramway and north of Louisiana to Uptown.

Bring your bike on board
ART’s level-boarding was designed with cyclists in mind. The subway-like level entry allows passengers to roll bicycles on board without the delay caused by steps or exterior bike racks. Those who are not physically able to lift their bikes into traditional bikes racks will especially benefit from the roll-on entry.

Unlike regular ABQRIDE buses, ART has upright interior bike racks. Since all three of the bikes racks are located in the back of the ART bus, bikes must be taken through the rear door and are not allowed in the front portion of the bus.

To load a bike into one of the three bike racks, place the back tire into the trough, secure the front tire with the hook on top and release the trough. If a cyclist is unable to lift his or her bike due to a physical condition, or if a cyclist has additional gear on the bike that prevents placing it in the rack, he or she may stand to secure their bike during the trip. However, if the bus is too crowded, the cyclist will need to wait for the next bus. The bus driver will make the final call on whether or not additional bikes are allowed on board.

ART Accessibility
Over 1,000 individual ADA improvements have been made along the nine-mile corridor. These improvements include the replacement of 359 non-compliant curb ramps, the reconstruction of 354 non-compliant drive pads and the introduction of 776 new industry-level pedestrian street lights.

Pedestrian crossings have also now been widened to a minimum of 10 feet throughout the project. At ART stations, pedestrian crossing are 12 feet wide, allowing enough room for wheelchairs to pass one another.

Sidewalks have also now been widened to a project-wide minimum of six feet. More than 435 trees were planted, many of which to provide enhanced safety between the road way and pedestrian walkway. Other ADA improvements such as tactile and audible notifications have also been added throughout the corridor that will support people with auditory, visual and physical limitations

App
The new ABQRIDE+ app is free and includes a complete list and map of bus routes, nearby businesses, bus tracking features and many other useful links.