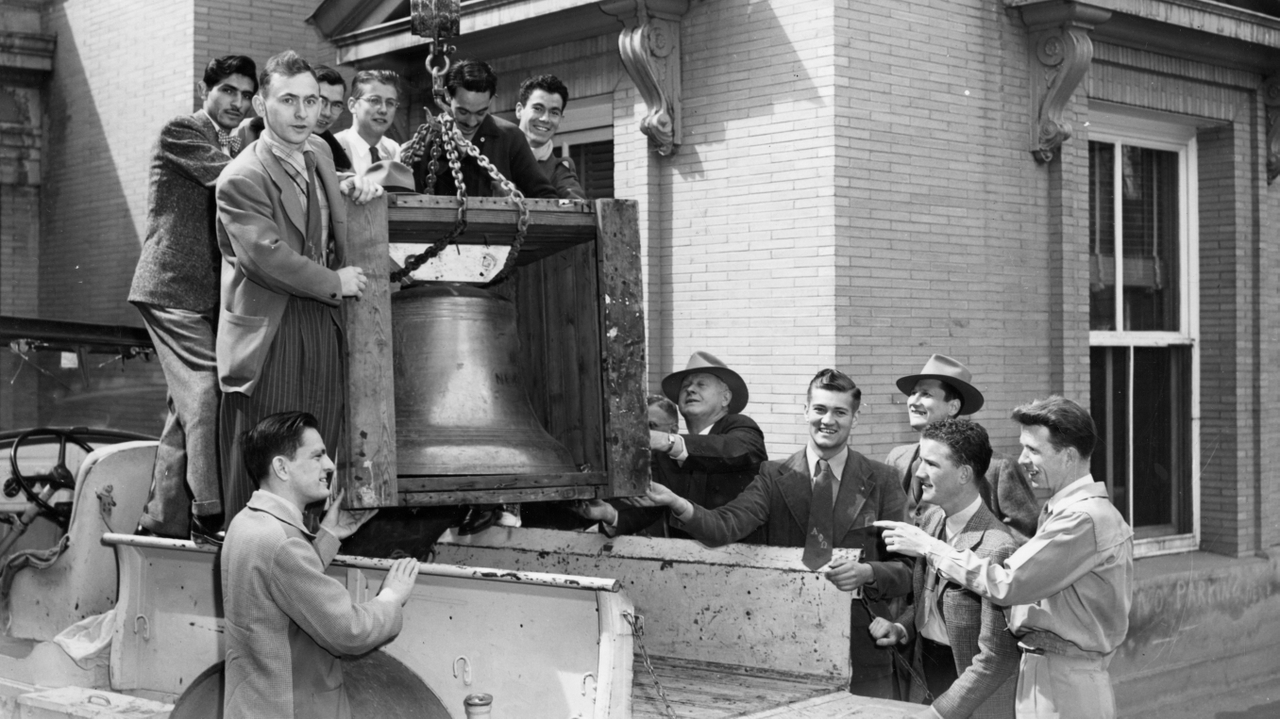 The USS New Mexico bell arrived at UNM in 1948 and was placed in the west tower of the Administration Building, now called Scholes Hall. 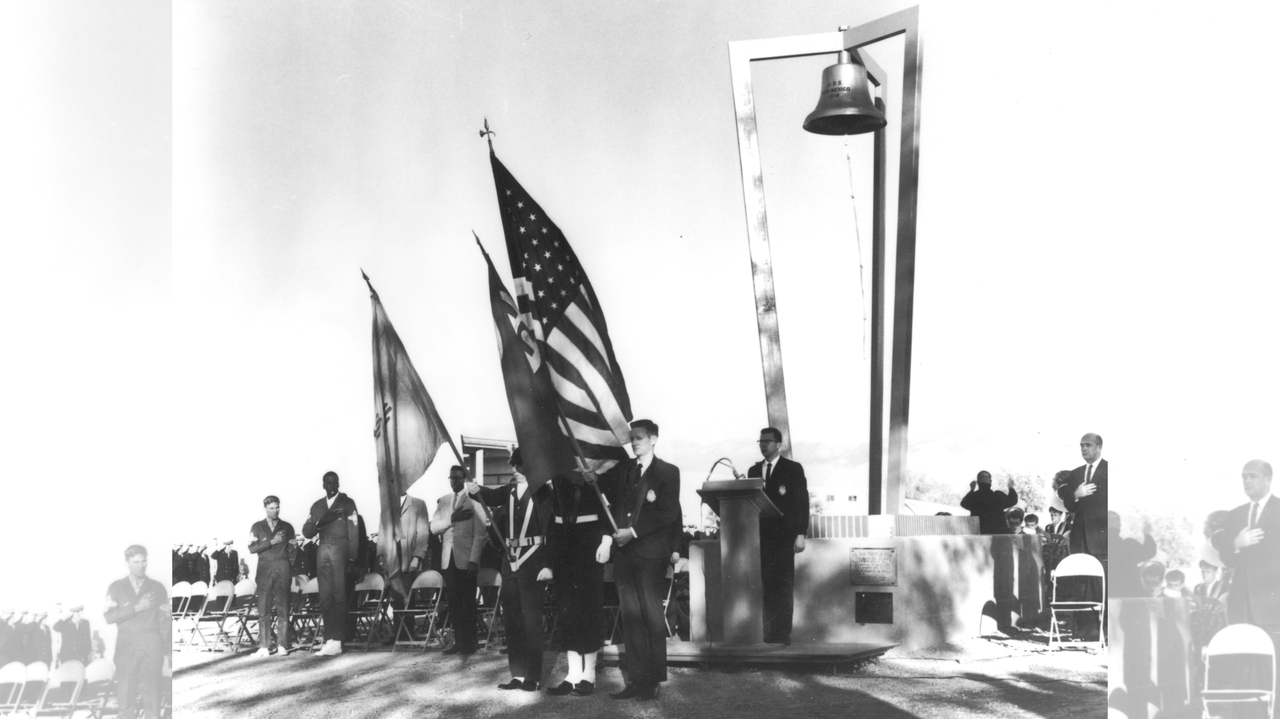 In 1964, the bell was moved to a tower at the east end of Smith Plaza. 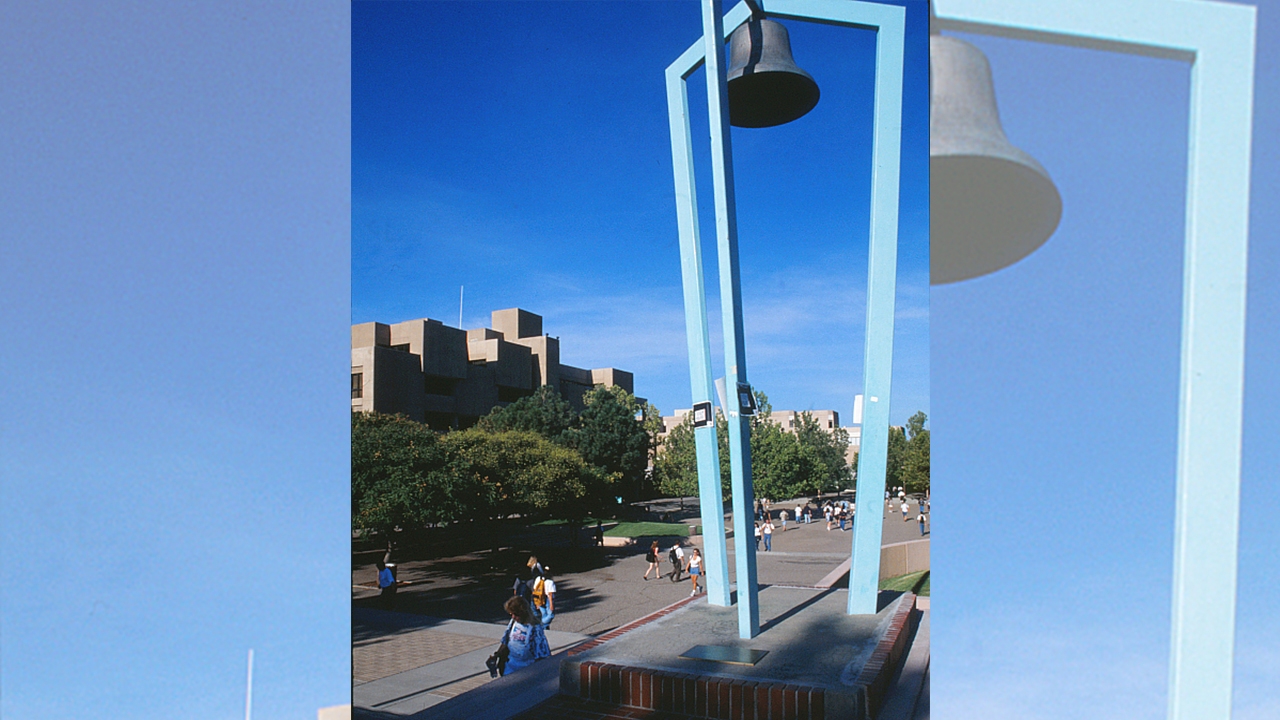 The USS New Mexico bell in Smith Plaza before the renovation. 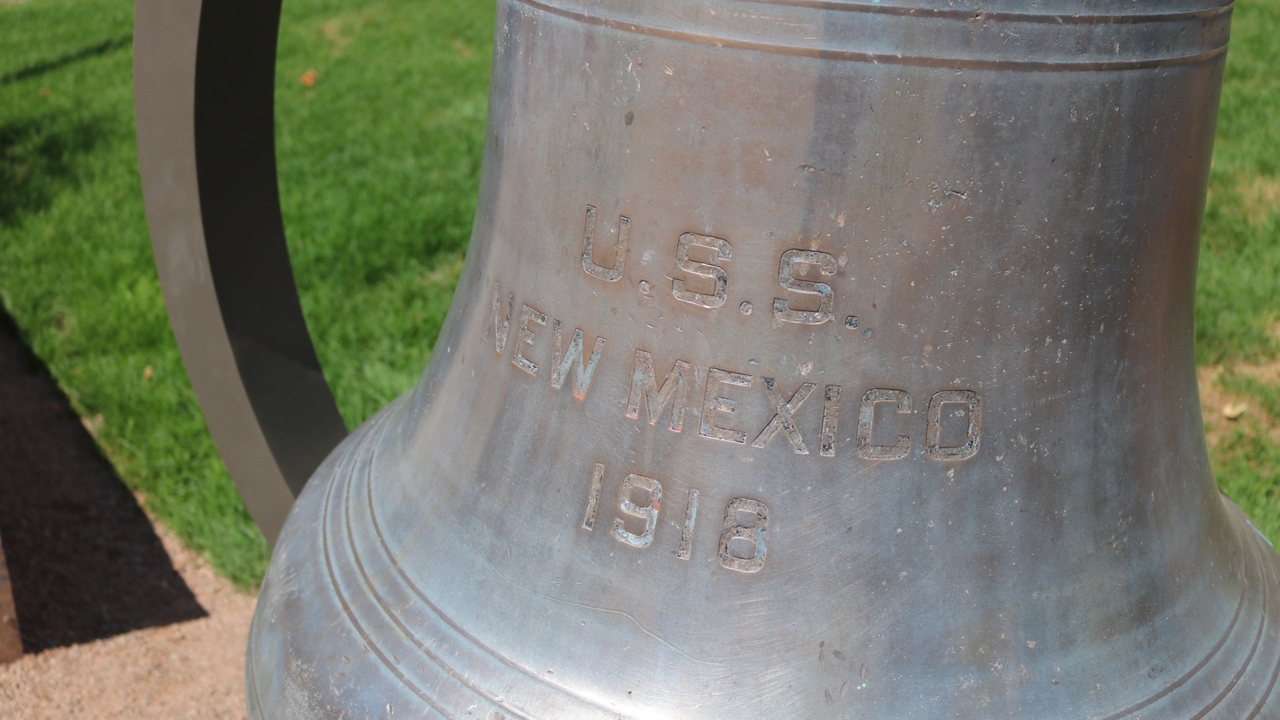 On loan from the United States Navy to The University of New Mexico as a reminder of the courage and commitment of those who defend our nation.

Bell represents a deep connection between the desert and the sea
By Katie Williams September 10, 2018
Categories: Front Page

You might have walked past it before, unassuming, placed in a turquoise metal frame near the edge of Smith Plaza before it was renovated. An aging bell, benignly weathering the elements of time and the New Mexico sky. But that’s not why you should stop, you should stop because this bell has saved lives and honored those who gave theirs.

Known as the “Queen of the Fleet,” the USS New Mexico was a 624-foot U.S. Navy battleship that was commissioned in 1918. At the time, the ship was the most technically advanced battleship in the U.S. Navy. And to recognize the irony of the ship being named after a land locked desert state, the Navy paid homage to it by christening the vessel with water from the Rio Grande.

From 1941–1945, the men, many actually just boys, who served on this ship during World War II, experienced the worst of the war—kamikaze attacks and bombings, one of which killed the ship's commanding officer, CAPT. Robert W. Fleming and 29 other crewmen, while another 56 sailors were killed during a second kamikaze attack.

To alert these sailors of impending danger, and to honor those buried at sea, two bells were used both frantically for their pitch and ceremoniously to honor sacrifice.

The public is invited, with many special guests, to honor the history and significance of the bell. A plaque will also be unveiled during the ceremony detailing the relationship between the ship and our community.

After decades of service, the USS New Mexico was decommissioned in 1946, and sold for scrap in 1947. The history of the ship and its sailors was saved in part due to the preservation of its two bells, and its iconic helm.

Thanks to requests from the New Mexico Governor at the time, Thomas Mabry, the state has two bells from the ship. When the state was provided the second bell, Governor Mabry agreed to give The University of New Mexico one of the ship’s bells that had been in the basement of the old Capital Building, now the Bataan Memorial Building.

That bell arrived at UNM in 1948, and was placed in the west tower of the Administration Building, now called Scholes Hall. A plaque noted that it was dedicated on April 17, 1948 as a “Memorial to those men and women who served their country during World War II.” In 1964, the bell was moved to a tower — at the east end of Smith Plaza — that had been designed by architect Max Flatow and financed by Alpha Phi Omega.

In the summer of 2018, the Plaza underwent a major renovation, revitalizing what is known as the heart of the campus. The stairs and landing where the bell was placed, were completely taken out during the construction. The display for the bell was redesigned and placed in a location more visible to the public, directly in front of Zimmerman Library.

“This historic bell is on loan from the United States Navy as a reminder of the courage and commitment of those who defend our nation, and in its new location it will serve to remind and inspire future generations of students,” said Greg Trapp, a member of the Navy League New Mexico Council and a co-author of Images of America USS New Mexico (BB-40).

“New Mexico earned six battle stars during World War II, and fired its 14-inch guns in support of many of the most crucial island invasions of the Pacific War,” added Trapp.

The bell and its new enclosure will be rededicated on Thursday, Sept. 13 at noon. The public is invited, with many special guests, to honor the history and significance of the bell. A plaque will also be unveiled during the ceremony detailing the relationship between the ship and our community.

The bell isn’t the only piece of USS New Mexico history at the University. The original helm — a large wooden wheel — is located in the Naval ROTC building.

“It is believed that the helm from the battleship USS NEW MEXICO (BB-40) was mounted in the Midshipman’s library of the NROTC Unit building in 1974,” said Naval ROTC Commanding Officer CAPT. Michael Riley. “The ship’s wheel is a physical manifestation of the 100-year connection between the state of New Mexico, its flagship university, and the United States Navy. To the Midshipmen earning a commission today, it is a constant reminder that their ultimate goal is to serve as leaders of Sailors and Marines at-sea.”

The dedication of the USS New Mexico bell aligns with Navy Week nationally. Celebrated in 14 cities across the U.S., Navy Week is designed to give Americans the opportunity to learn about the Navy, its people and its importance to national security and prosperity.

Images of America USS New Mexico (BB-40) is available from Arcadia Publishing, and the royalties go to the Navy League of the United States, New Mexico Council. The book celebrates the 100th anniversary of the ship, and it is the work of a unique team of authors—retired nuclear engineer John Taylor, UNM history professor Richard Melzer, retired electrical engineer Dick Brown, and lawyer Greg Trapp.