Fifty years ago a gym was built on The University of New Mexico's south campus at University and Stadium Blvds. Fifty years later, that same building has become an iconic gymnasium known for its loud, intense fan base, and successful men's and women’s basketball programs.

UNM celebrates the 50th anniversary of WisePies Arena – The Pit, by playing its first-ever opponent in The Pit, Abilene Christian. The game will be televised on ROOT Sports at 7 p.m. MST Wednesday, Nov. 30.

The first time the Lobos met with the Wildcats was on Dec. 1, 1966. UNM defeated Abilene Christian, 62-53. Since then, a total of 840 games have been played overall with the Lobos coming away victorious in 697 of those, good for a stunning .814 winning percentage inside The Pit.

WisePies Arena aka The Pit was built in a 37-foot hole on Albuquerque's southeast mesa. First the roof was constructed, then the hole was dug and the Arena built. That all happened in 1966. The unique Behlen roof (338 by 300 feet) was set up by contractors and then 55,000 cubic yards of earth were removed. About 28,000 yards of concrete were poured in the initial construction, which allowed a seating capacity of 14,831. The cost - an incredibly economical $1.4 million.

“The Bob King Court and the Pete McDavid Lounge are a tribute to two of the men who are responsible for the success of the facility we fondly call The Pit." – Former UNM President Richard E. Peck

What is even more impressive about UNM's home court is that more than 13 million fans have flocked into this sunken edifice to see their beloved Lobos play basketball. The Lobos have averaged an astounding 15,410 fans the past 49 years, an amazing 95 percent of capacity.

The Lobos have finished second in the nation in attendance five times, third on four occasions, and fourth six times, and have been in the top 25 in attendance every year since the 1966-67 season, including 35 seasons on the top-10 in NCAA attendance. UNM has also led the Mountain West in attendance in 11 of the conference’s 16 years of existence.

Less than 10 years since the iconic gymnasium opened its doors, expansion was undertaken when it became apparent that fan interest was too great for the original structure. The expansion in 1975 cost near $2.2 million and involved the extension of a cantilevered deck above the existing facility. There are six rows in the deck, with a seating capacity of 2,300. Reserved standing-room-only spots increase The Pit's capacity to 18,018. 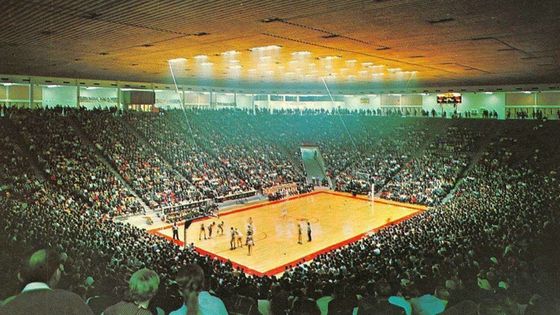 The Pit also recently underwent a massive upgrade and expansion that was completed in time for the 2010-11 season that included $60 million of improvements. Among the improvements were the U.S. Bank club/suites level seating, upgraded lower bowl seating, two end wall video boards, ribbon boards, a unique graphics package showcasing the history of Lobo basketball and UNM athletics, upgraded concessions area, the new Lobo Den Store, and a remodeled concourse. NBA locker rooms were added for both the men's and women's teams along with a player's lounge.

The facility is located at the south end of the building and includes a practice floor with six baskets, a video viewing room and an area to accommodate media needs for Lobo games and NCAA basketball tournaments. The 2010 renovations successfully integrated the Davalos Center with The Pit, allowing Lobo men's and women's basketball to seamlessly move between the two facilities for practice and games and camps.

Bob King Court
On Oct. 2, 1992, then UNM President Richard E. Peck announced that the basketball court in the building would be named in honor of Bob King, former UNM basketball coach. King coached the UNM men's basketball team to national prominence in the 1960's and, along with Athletics Director Pete McDavid, helped to make The Pit a reality.

"We wanted to recognize Coach King's contributions to Lobo basketball," Peck said. "UNM's Memorial Committee recommended that we honor Coach King's accomplishments, and the naming of the court has allowed us to do so without diminishing the recognition which has already been paid to his colleagues, including former Director of Athletics Pete McDavid.

“The Bob King Court and the Pete McDavid Lounge are a tribute to two of the men who are responsible for the success of the facility we fondly call The Pit."

The Bob King Court was dedicated at formal ceremonies on Dec. 1, 1992.

The floor of Bob King Court was replaced just before the beginning of the 2013-14 seasons. 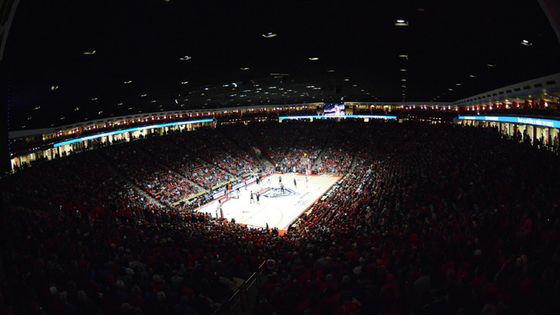 WisePies Arena
On Dec. 1, 2014, UNM President Robert G. Frank announced that WisePies Pizza & Salad, a locally-owned business, agreed to give $5 million over 10 years to support the UNM Athletics Department through the newly-established WisePies Fund. It is the largest cash gift ever to the UNM Athletics Department and the sixth largest cash gift overall to the university. The WisePies Fund will be used to support The Pit debt service incurred from the 2009-10 renovations.

As part of the recognition for their generous support, beginning Dec. 1, 2014 University Arena will be named WisePies Arena (aka The Pit) for the duration of the gift. The company logo will appears on exterior signage of the arena as well as on Bob King Court and tickets. The recognition also includes an arena suite.