Wood to Serve as Special Advisor to Provost

University of New Mexico Provost Chaouki Abdallah announced the appointment of Richard Wood, associate professor of sociology, former president of Faculty Senate and director of the Southwest Institute on Religion & Civil Society, as Special Advisor to the Provost for Strategic Initiatives, effective immediately.

“With the ever present need for experienced administrators to assist me in meeting the diverse goals of academic affairs, I am very pleased to announce that Richard Wood has agreed to take on the role of special advisor to the provost for strategic initiatives. Richard will be integral to meeting the goals of our College of Education redesign and other major initiatives in academic affairs,” Provost Chaouki Abdallah said.

Wood will also work with the associate provosts and deans on transformative academic initiatives.

Wood said, “If there is one initiative through which UNM can make the most immediate impact in New Mexico, it is by transforming how we train the next generation of public school teachers for New Mexico. UNM intends to do that by drawing on the best research-based knowledge of effective teacher preparation and the expertise and commitment carried by our education faculty, to design a state-of-the-art program training teachers to succeed in New Mexico classrooms. I am excited to help coordinate that effort, and will do that under the authority of the Provost and in collaboration with the College of Education faculty and the Faculty Senate.”

Wood, tenured in sociology, is founding director of the Southwest Institute on Religion, Culture, and Society. His research focuses on the cultural and institutional underpinnings of democracy, especially those rooted in faith communities. In 2003, his book on community organizing in poor urban settings, Faith in Action: Religion, Race, and Democratic Organizing in America (University of Chicago Press 2002), was named outstanding book in the sociology of religion by the American Sociological Association.

He is currently writing A Shared Future: Ethical Democracy and Multiculturalism, using a contemporary national social movement to analyze the constructive tension between multiculturalist and universalist democratic traditions; and Faith and the Fire of Public Life, analyzing the impact of civic engagement on faith communities. Wood serves as co-editor of a book series, Cambridge Studies of Social Theory, Religion, and Politics at Cambridge University Press, and has led major nationally funded research projects on religion and democracy in the United States, Central America and the Middle East. He served as president of the UNM Faculty Senate; co-chair of the UNM Committee on Governance; director of the UNM Religious Studies Program; and has held a variety of leadership roles in national professional organizations.

Office of the Provost 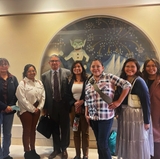