The University of New Mexico Department of Chemistry and Chemical Biology is hosting this year’s Milton Kahn Annual Lectureship on Friday, Sept. 29 at 4 p.m. in SMLC 102. 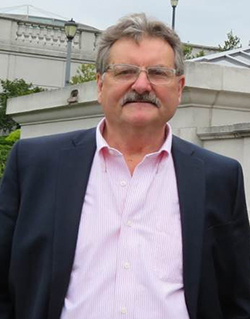 The lecture will feature Mark Johnson, the Arthur T. Kemp Professor in the Department of Chemistry at Yale University. Johnson is known for the development and exploitation of experimental methods that capture and structurally characterize transient chemical species, such as reaction intermediates, using cryogenic ion chemistry in conjunction with multiple resonance laser spectroscopy.

The lecture, ‘Mass Spec Meets FTIR: The Genesis of Cryogenic Ion Vibrational Spectroscopy (CIVP)’, is free and open to the public.

Lecture Summary:
The coupling between ambient ionization sources, developed for mass spectrometric analysis of biomolecules, and cryogenic ion processing, originally designed to study interstellar chemistry, creates a new and general way to capture transient chemical species and elucidate their structures with optical spectroscopies. Advances in non-linear optics over the past decade allow single-investigator, table top lasers to access radiation from 550 cm-1 in the infrared to the vacuum ultraviolet. When spectra are acquired using predissociation of weakly bound rare gas “tags,” the resulting patterns are equivalent to absorption spectra and correspond to target ions at temperatures below 10K.

Taken together, what emerges is a new and powerful structural component to traditional mass spectrometric analysis. Moreover, because the spectral features of the cold ions are sharp, the evolution of bond-specific transitions can be used to follow the docking arrangements of host-guest complexes and the local contact points between the ionic constituents of ionic liquids. Recent applications ranging from the mechanisms of small molecule activation by homogeneous catalysts to the microscopic mechanics underlying the Grotthuss proton relay mechanism in water emphasize the generality and utility of the methods in contemporary chemistry.