Former University of New Mexico registrar Alex González recently received the Fred Turner Award for Outstanding Service to NASPA in memoriam. González, who passed away unexpectedly in 2017, was a staple on UNM’s campus for creating spaces on campus where all students could feel comfortable.

The National Association of Student Personnel Administrators, or NASPA, is an organization for Student Affairs Administrators in Higher Education. Each year, NASPA recognizes the outstanding contributions of members who are transforming higher education through exceptional programs, innovative services, and effective administration. NASPA's Excellence Awards cover eleven categories crucial to the success of students and the continued growth of the student affairs profession. Winners are recognized at the annual NASPA Annual Conference.

The Outstanding Turner Award honors NASPA members who have demonstrated continuous membership for 10 or more years and have served in a leadership role at the state, regional or national level of NASPA. 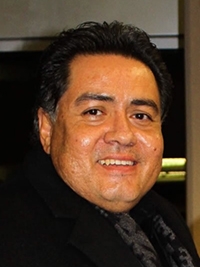 “I am pleased that our late colleague and friend, Alex González was honored with the Turner Award,” said Eliseo “Cheo” Torres. “Alex is deserving of this award for his many hours of service to our students at UNM both as registrar and a number of other roles as well his service on the Board of Directors for NASPA region IV West.”

González was a staple on UNM’s campus for creating spaces on campus where all students could feel comfortable.

A native New Mexican, Alex arrived at UNM in the late-80s with his twin brother, Andrew.  The González brothers found a close-knit group at UNM working together with their friends as work study at El Centro de La Raza.

After experiencing racism on campus, Alex worked to make every Lobo feel safe and welcomed on campus including supporting cultural events on campus.

Following graduation, Alex began working for UNM’s Scholarship Office and mentored many students through a variety of organizations including Omega Delta Phi Fraternity and NASPA.

Alex also worked to bring all the separate Hispanic, Latino and Mexican student groups together. His vision became a reality when he had to opportunity to co-MC for the first El Centro de la Raza Graduation ceremony honoring Latino students as one family. La Raza Graduation is still one of the largest most celebrated events at UNM.

Alex was named director of the Scholarship Office end eventually opened the door for the Registrar position he held for eight years.

During his time in NASPA, Alex mentored several NUFPs—NASPA’s Undergraduate Fellows Program—helping many of them find their professions.

His twin, Andrew, accepted the award in his honor.