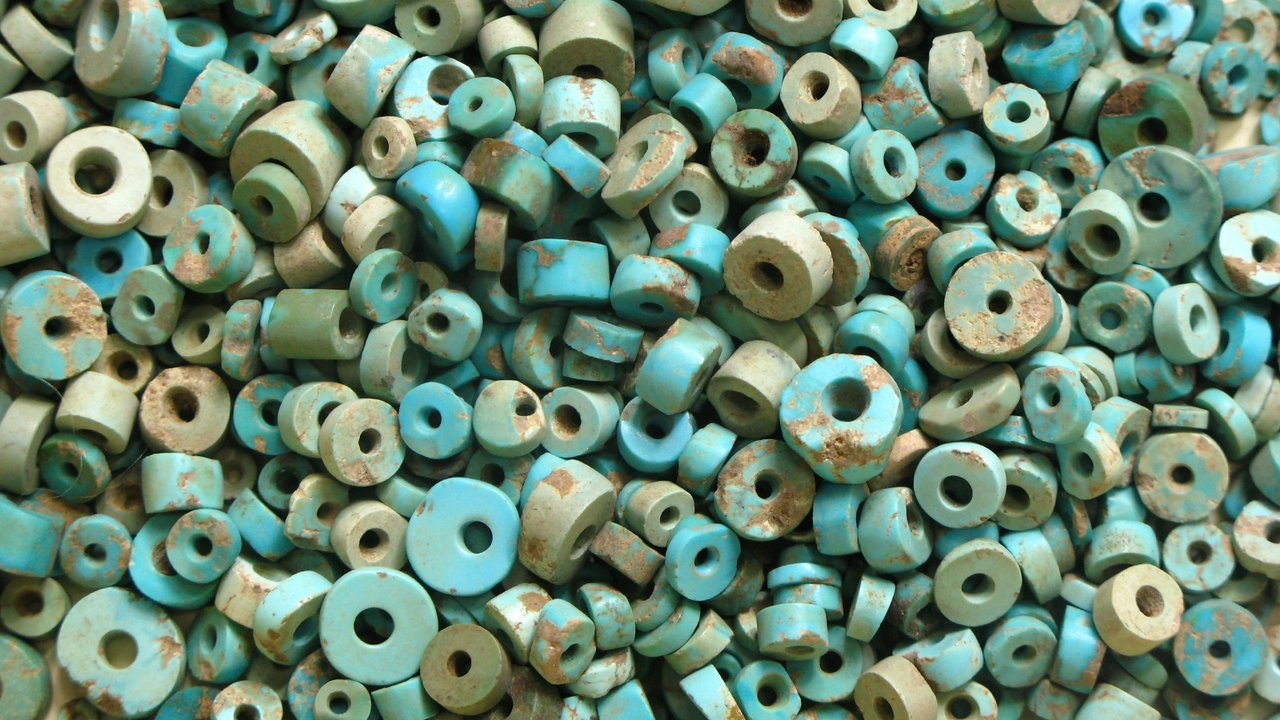 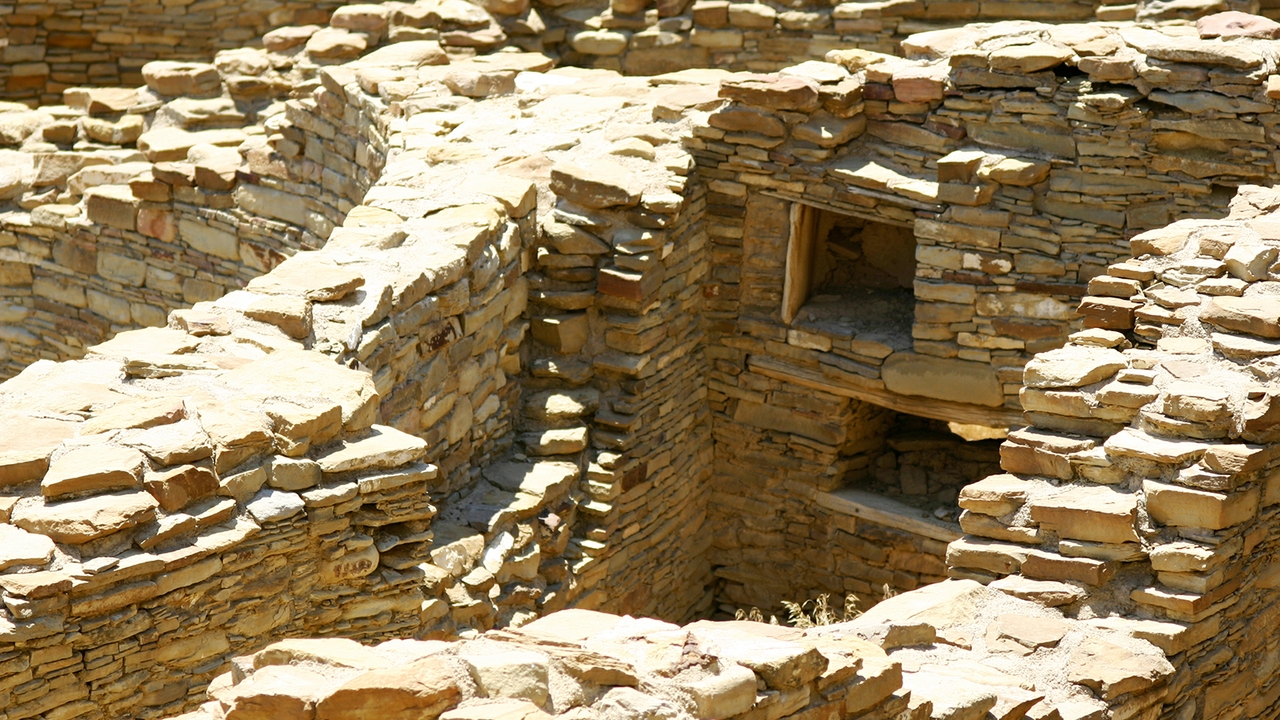 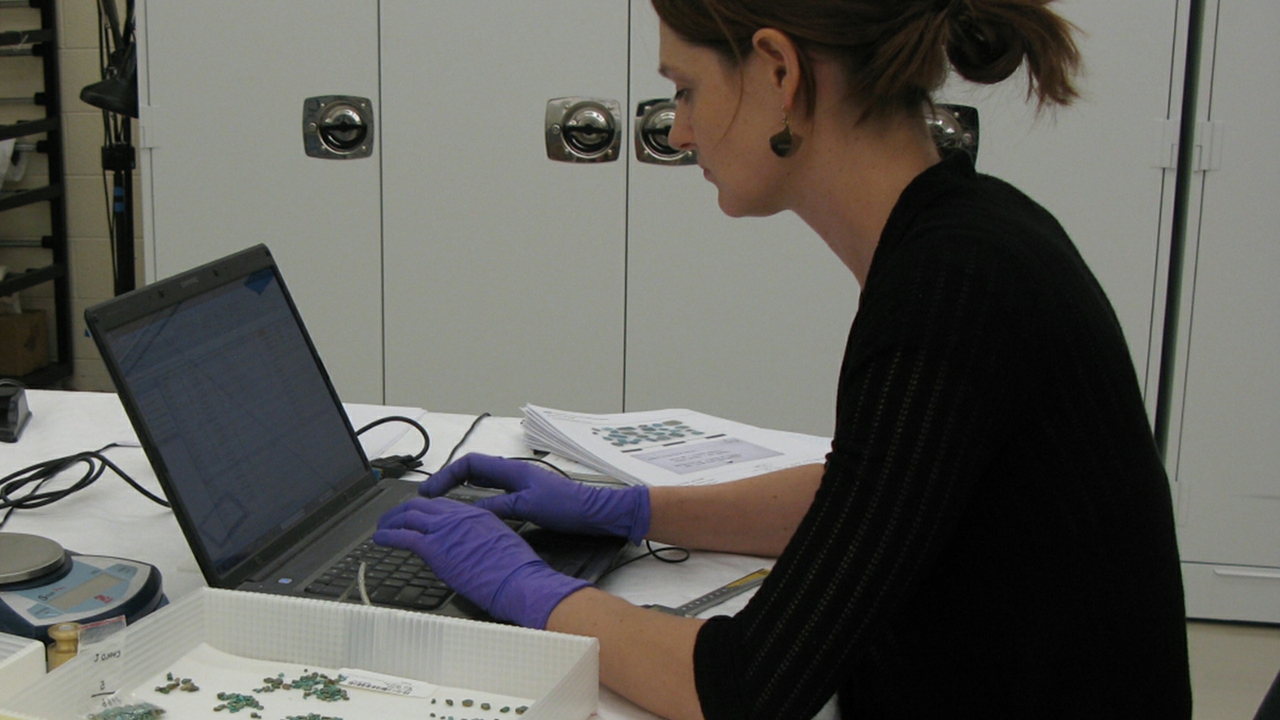 Chaco Canyon is extraordinary in many respects, not least in the dense concentration of jewelry found in archaeological contexts dating between the 9th and early 12th centuries CE (Current Era). The largest and most prominent pueblo in the Canyon is Pueblo Bonito, a 650-room structure with elite burial chambers and material imported from across the Southwestern U.S. and Mesoamerica. Excavations at Pueblo Bonito between 1896 and 1927 resulted in the collection of over 100,000 items of personal adornment fashioned from turquoise, marine shell, jet, and local stone.

Hannah Mattson, Southwestern archaeologist and an assistant professor of Anthropology at The University of New Mexico, has studied Pueblo Bonito’s ancient jewelry assemblage for over a decade. In this year’s Maxwell Museum of Anthropology Fall Archaeology Lecture, she will discuss her research, including how these objects were produced and what their past social meanings may have been.

Mattson specializes in the archaeology of Chaco Canyon and the larger Ancestral Pueblo region, personal adornment and social identity, ceramic technology, and public archaeology. She has authored numerous articles and book chapters on items of adornment from the northern Southwest and is currently editing a volume titled Personal Adornment and the Construction of Identity: A Global Archaeological Perspective that will be published in 2021.

The Jewelry of Pueblo Bonito: Insights into the Production, Use, and Meaning of Personal Ornaments at Chaco Canyon presented by Mattson via Zoom on Wednesday, Nov. 18, from 4:30 to 6 p.m. Registration is required to access the lecture link.

“I was always interested in Chaco Canyon. It was the primary reason I decided to attend graduate school at UNM,” Mattson recalled. “My first encounter with Chacoan jewelry was when I was working as a research assistant for Tom Windes, a Chaco park archaeologist. He offered to let me analyze and write up the assemblage of the earliest ornaments in the Chaco collections, those dating to the very beginning of what some people used to call the ‘Chaco Phenomenon.’ I was fascinated and the rest is history.”

Most of her ornament research was conducted with museum collections from excavations of Pueblo Bonito occurring over a hundred years ago, as well as additional jewelry objects recovered from the site during the field projects of UNM Anthropology professor Chip Wills and Leslie Spier Distinguished Professor of Anthropology Patricia Crown in the Chaco Stratigraphy Project and the Room 28 re-excavation project.

“I actually did get to excavate in the mounds in front of Pueblo Bonito during the Chaco Stratigraphy Project as a graduate student and found quite a few ornaments. It was pretty exciting,” Mattson remarked.

Materials used to make the jewelry found at Chaco, including turquoise, shale, jet, and abalone shell, were from widespread sources.

Since some of the materials can be found locally, such as shales and jet, they would have been gathered directly, Mattson explained. The more exotic materials, such as marine shell, would have been obtained through down-the-line trade with other groups, such as the Hohokam. Turquoise is interesting, she said, because while it occurs fairly locally in the Cerrillos Hills, a significant portion of it has been sourced to areas far to the west and south of Chaco.

Ornaments have been found in just about every context at Pueblo Bonito – the trash middens, debris in abandoned rooms, room floors, kivas, and burials, Mattson observed. Based on this, it appears that those pueblo occupants had greater access to personal ornaments and to materials like turquoise and marine shell than those living in smaller communities in the area. While items of adornment are ubiquitous at the site, they are particularly concentrated in special contexts such as elite burials and ritual deposits.

Although there are a few ornament forms that seem to be more prevalent at Chaco than other places, Chacoan jewelry is characterized more by its sheer quantity, preferences for certain materials such as turquoise, shell, and jet, and ways that different kinds of ornaments were used in social practices. There is some preliminary evidence that lapidarists at Pueblo Bonito were using at least one unique method of production, but that research is still in its beginning stages, she said.

Chaco jewelry was likely crafted by experienced artisans and non-artists, Mattson said, noting, “There is wide variation in the skill represented, ranging from sloppy non-specialists to true experts. What we don’t yet know is how much of the jewelry found at Pueblo Bonito was produced at the site. Can the variation be explained by production by multiple craftspeople in the surrounding area, or did the population of the pueblo produce its own ornaments? It’s likely a mixture of these two scenarios.”

The jewelry at Chaco has timeless style that Mattson sees in modern jewelry. Her own particular favorite pieces found at Chaco are small three-dimensional turquoise beads in the shape of frogs and tadpoles only found in very special contexts, particularly within ritual offerings.

“Many of the styles have persisted in this region for a thousand years. Some Pueblo jewelers, such as those from Kewa Pueblo, are also intentionally revitalizing older ancestral forms,” she said.

See Mattson discuss the jewelry of Chaco Canyon on ¡Colores!.

Video by Marina Bernal/Advance at UNM