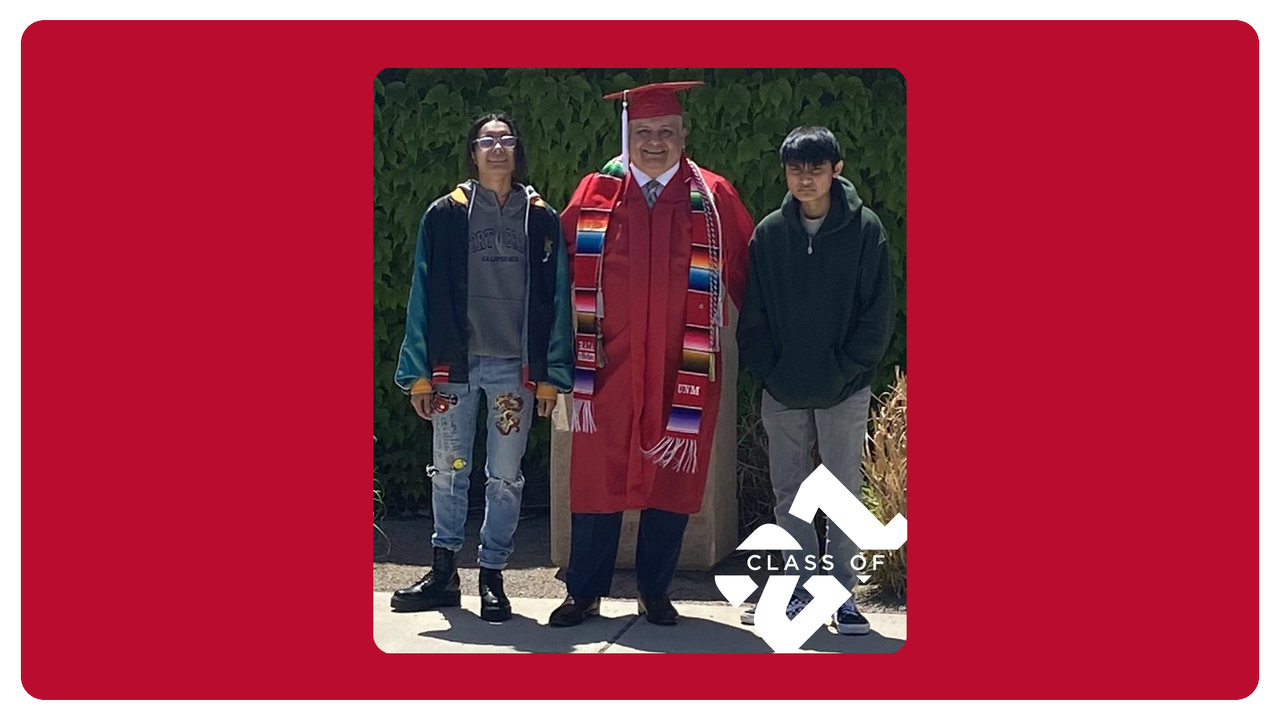 Oftentimes, it’s a thankless job – serving and protecting your country. The long-term effects of a deployment – combat or non-combat, can result in Iife-changing circumstances even for those who manage to handle the stress of serving in the military. As a combat Veteran, Jacinto-Temilotzin Sanchez has experienced many of these effects including Post-Traumatic Stress Disorder (PTSD).

However, when Sanchez crosses the dais to receive his diploma from The University of New Mexico this May, it will be a far different experience than the road he traveled to get to Albuquerque. As a former Army paratrooper who has managed the effects of PTSD, Sanchez has seen his share of life-changing events spanning a 20-year career in the U.S. Army that included two deployments to Iraq. He is receiving a Bachelor´s in Liberal Arts cum laude with a concentration in Spanish. This fall, he will roll right into his Master’s in Public Administration as part of UNM’s shared credit program with the School of Public Administration. 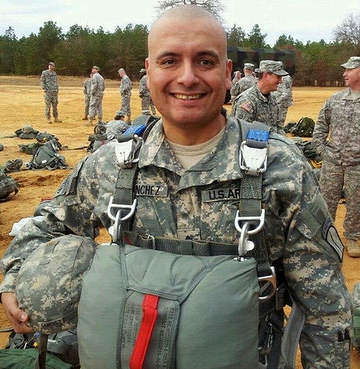 Jacinto-Temilotzin Sanchez prepares for a jump out of an airplane. Sanchez was deployed to Iraq with the 82nd Airborne Division.

Sanchez, an El Paso, Texas native who calls New Mexico home, first enrolled at UNM in the fall of 1997 while trying to get his life in order following the death of his father, Ricardo Sanchez two years prior. Understandably, he struggled and received a couple of failing grades.

“I wasn´t very focused my first time at UNM,” said Sanchez. “I was trying to move on with my life and moving to New Mexico was my attempt to get focused. It was a struggle and after visiting my Uncle Manny in Belen, he asked me, “what I was doing with my life and that I should look into joining the military. I could create a beautiful life and see the world.”

So, Sanchez enlisted in the Army on New Year’s Eve in 1997 and before he knew it he was assigned to Schofield Barracks in Oahu, Hawaii. “I remember when my drill sergeant was giving out the duty assignments and my assignment to Schofield Barracks. I didn’t know where that was. Then, everyone shouted HAWAII!! I couldn´t believe it, just months before I was struggling in Albuquerque and now, I was going to Hawaii for three years!”

“I have known Jacinto for more that 20 years when he was enlisted in the military. He is now a Veteran who is focused on his studies and is graduating from UNM with academic honors. Jacinto was one of the most committed students I have worked with and is truly a positive role-model to his family. I am very proud of him.” – Vice President for Student Affairs, Eliseo “Cheo” Torres

Sanchez met his ex-wife in Hawaii, who had four kids, and they all became a family and moved to Germany where his next duty station was located and where his son Jacinto Jr. was born.  When the invasion of Iraq began, Sanchez felt a need to be part of his generation´s war. “I signed up for Airborne training and put in for an assignment with the 82nd Airborne Division,” Sanchez said. “I knew if I was going to go to Iraq, then I wanted to go with the best.”

His family moved to Fort Bragg, N.C. with Sanchez heading to Airborne training in Fort Benning, Ga. “It was challenging, but it felt amazing having my Airborne wings and returning to Fort Bragg,” said Sanchez. “Six months before my first deployment, my son Jullan was born. I call him my Airborne baby.”

I’m sorry my sweet, beautiful sons for not trusting you with my pain
no longer in the chaos not
going back again
but I’m still not as present as I like to be
sorry for sitting there just only watching
for being weak not fighting to keep you close to me

Sanchez was deployed to Iraq with the 82nd Airborne Division but was then attached to the 1st Infantry Division, while on my 15-month deployment during the surge in 2007 to provide satellite internet and radio operator communication. It was in Adhamiya, a neighborhood in Baghdad where Sanchez had a near-death experience. He was guarding some locals hired for a construction project when a mortar landed and exploded about 7-feet away. It was the thought and realization of maybe never seeing his sons again that terrified him the most about the traumatic event.

“Luckily it landed on the other side of a small rock wall, thus absorbing the brunt of the explosion and blowing out the tires where the Humvees were parked,” Sanchez recalled. “At that moment, I knew I wasn’t safe from the war, not even within the walls of the combat outpost Apache. I started to mentally prepare myself for the possibility of not seeing my 2-year-old and 9-month-old sons again and a part of me shut down. It has taken me over a decade to reclaim that part of me back.”

Sanchez later learned during in-patient therapy with other active-duty Soldiers, Sailors, Airmen and Marines, that this event was his most traumatic during his service in the Army, but it was only one of several that tested his mettle. He returned from his first deployment to Iraq and received the Combat Action Badge. After, he transferred to Fort Hood (Texas) for his second deployment to Iraq. “It was much easier, even when we were getting bombed, I was numb and instead tried to get my team to relax, it was all their first deployment,” he said.

He returned from Iraq a second time and experienced his deepest hurt when his wife said she and the kids would not move again. “I was losing everything, especially my sons,” Sanchez said. Alone, he went back to Fort Bragg and was sent to the 112th Special Operations Signal Battalion to support Delta and Special Forces as an Airborne member.

The effects of two deployments and the loss of his sons mounted and took a heavy toll on Sanchez who was already suffering from the effects of PTSD. He tried to get treatment, but instead, he was put in a nondeployable position dealing with Secret and Top-Secret Codes used in their communication equipment. His focus shifted to retirement. Around the same time, his mother, Maria-Teresa Sanchez, got a terminal illness. His Command Sergeant Major in North Carolina saw that Sanchez had had enough and said: “Sometimes a paratrooper needs to take a knee from the fight and go back to your family; that they needed me.” He managed to get a compassionate reassignment for Sanchez to be near his mom at Fort Bliss in El Paso.

He used his last years in the Army to be with his mother before she died, got a divorce and later visitation rights with his sons. He also had one last non-combat deployment to Qatar. “Just like my Uncle Manny said, over my 20-year career I got to see the world from Thailand, Israel, Qatar, Germany, France and two combat deployments to Iraq,” said Sanchez, who retired in El Paso and then moved back to Albuquerque with help from my cousin Joanne Elfers. “I got back on my feet,” Sanchez said. “She fought for me when doctors would be dismissive of me.” 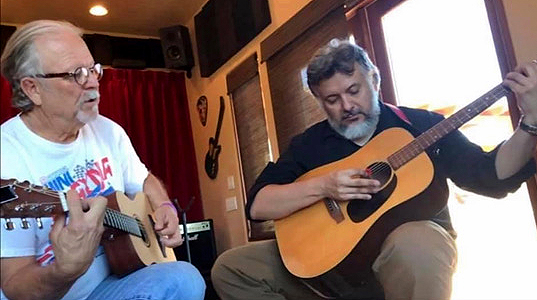 Skip Pascoe (l.) and Jacinto-Temilotzin Sanchez (r.) learning to play the song “Forgive Me," based off a poem written by Sanchez to his sons.

Since his Army retirement, Sanchez enrolled at CNM and transferred to UNM and also studied abroad in Quito, Ecuador then Cusco, Peru but my time was cut short because of the start of the COVID outbreak.  Sanchez has worked hard to battle the daily effects of PTSD, a disorder in which a person has difficulty recovering after experiencing or witnessing a terrifying event that can last months, years and even decades. In fact, many people never get over the memories that bring back traumatic effects that can include intense emotional and physical reactions.

As part of his efforts to deal with his PTSD, Sanchez wrote a poem to his sons while in a treatment center in San Antonio, Texas. After moving back to Albuquerque, he attended a therapeutic songwriting workshop sponsored by the New Mexico Music Awards that partnered Veterans suffering from combat PTSD with local songwriters. Skip Pascoe, a songwriter and Navy Veteran, saw the potential to take the poem and make it into a song.

“Together, over the next few hours, we were able to create a song that over time has become a very tangible look at my years of pain,” Sanchez said. “It’s a song of forgiveness; I was asking my sons to forgive me for the distance, both physical and emotional, that had happened largely due to my constant fight with my PTSD from combat. My song has allowed me to heal my painful separation from my sons. In the end, the song became something that all parents could relate to, especially the sacrifices made and the loss of our children’s childhood time that we wished we could have back.”

Sanchez has also connected with various communities over the past decade to manage his PTSD. In addition to weekly counseling, the rigors of being a student have helped him in his transition to civilian life. He also attends weekly, private dance lessons at Holiday Dance Studio as part of his healing.

“I remember a couple of years ago after dropping my sons off back to their mother in Texas, I was very depressed. I was at a restaurant and I saw in the paper that Holiday Dance Studio was hosting a Friday night dance,” Sanchez said. “I remember feeling anxious about going but after calling and talking with my battle buddy Scott Bennion, he encouraged me to give it a try.

“I immediately felt that I found my people. The owners' Joey and Tanith Hudson were so welcoming and there were some other Veterans there too. I have been going there for almost three years. It is more than a hobby, it is a safe place that I can focus on other things, like getting my footwork down for a Foxtrot, Tango, or Waltz, and enjoy dancing with my lovely friends. Dancing is very grounding; it forces me to be very present.”

Sanchez feels PTSD is a reaction created to protect us; a process to find and deal with the root that created this sometimes-debilitating response, so those suffering its effects can rejoin the rest of the world. “Dreams and goals are excellent to weave in part of healing from PTSD,” he says. “The hyper-sensitivity, alertness and strong desire to isolate can be channeled into something positively tangible. This is where we need something to work on so when we have bad days, we can still retreat but continue working on our goals and dreams. 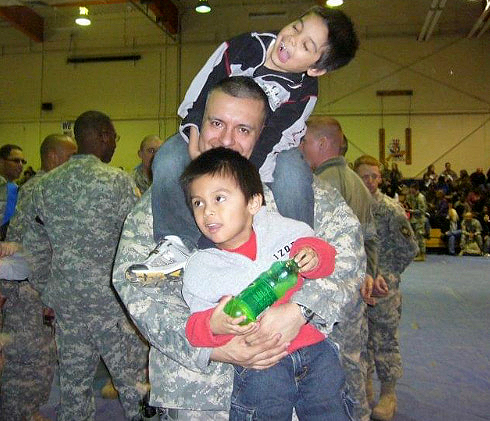 Jacinto-Temilotzin Sanchez with his sons Jacinto Jr. (on shoulders) and Jullan (in arms).

“It is the movement of doing something that is a very important part of the healing. Plus, we all need something to celebrate after reaching goals, no matter how small this can bring so much pleasure, even in very dark times. The way I see it, as you begin meeting your goals these accumulate and you will amaze even yourself.”

It’s safe to say Sanchez, his boys and all those who have supported him over the years will be celebrating his incredibly special goal of earning a college degree.

“I am aware of my PTSD, but I have learned to embrace that part of me,” Sanchez said. “It does not define me; it is a part of me that I have been able to channel and use. I feel that I’ve found my rhythm especially since my sons live with me now and I have created new routines. The struggle is real, but it is part of the journey of living again; life is worth fighting for.”