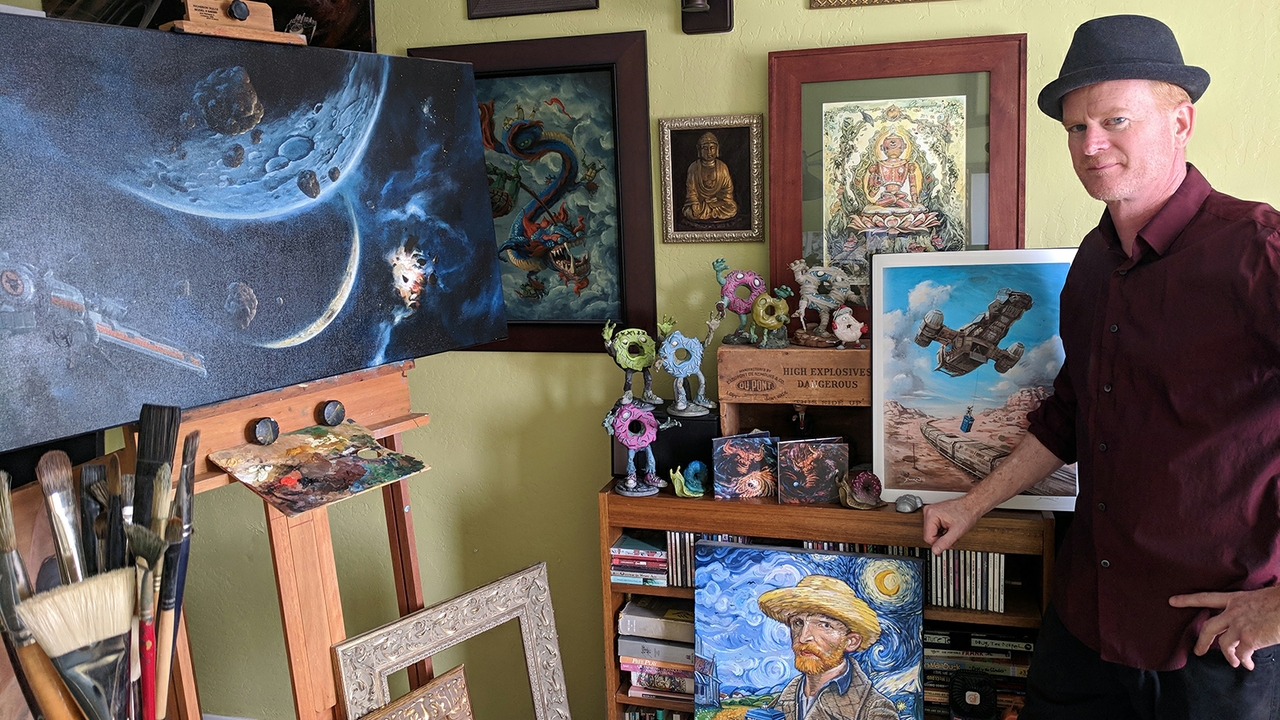 Update 3/26: after the publication of this story, the artist opened a donation page. Additional funds are already being pledged, and the public is welcome to donate.

A staff member at The University of New Mexico is using his artistic platform to generate community support during this unprecedented time of social distancing.

John Sumrow is a web designer at UNM, but is better known as an Albuquerque-based artist and illustrator. Many people recognize his iconic mashups of fantasy and science fiction, including depictions form cult classics like Firefly and Dr. Who. His adult coloring nights draw in people from around the state to Tractor Brewing in Nob Hill, Wells Park and West Side; and his online “Patreon” account generates $505 a month. It’s that online community that he’s using to bring much-needed relief to one local nonprofit.

“New Mexico is one of the poorest states in the U.S.A., so this is a time to do some good,” Sumrow said.

When news of the Coronavirus and its impacts started spreading across New Mexico, Sumrow was one of many who were told to work from home. But he’s not letting the social distancing stop him from supporting his community during its time of need. He pinged his online supporters, encouraging them in a special message titled “Generosity.”

“As you know things are really tense right now with the current pandemic,” he wrote “Please stay calm and positive.”

He then went on to announce that all proceeds from his Patreon account during March would be donated to Roadrunner Food Bank. The Patreon account is set up on a “tier” system, meaning subscribers pay different amounts of money for special rewards from the artist, like postcards or original works. When Sumrow announced his intention to donate the proceeds, a follower piped up and did him one better.

“For what it’s worth, I’m going to match your donation,” John Hawley responded in the online thread.

“My wife and I used to live in Albuquerque, and so we know what it’s like in New Mexico,” he said. “We normally travel down for the Albuquerque Mini-Maker Faire, but that’s been pushed out to 2021, so what we can do to help there has been somewhat limited. When Sumrow announced what he was doing it just felt like the right thing to do to match his funds.”

That brought the total donation amount up to $1010, but the duo didn’t stop there. Hawley’s employer, VMWare, matches donations to non-profits through their citizen philanthropy program and agreed to jump onboard, bringing the total dollar amount to $1515, which will be presented to Roadrunner Food Bank on March 31.

“Back in 2008 when the financial meltdown happened I would pass the Road Runner Food Bank on my commute to work, Sumrow said. “Every day the line got longer as the meltdown took hold. This time, during hard times, I am in good shape to do something. So I am.”

He concluded by reminding people to stay kind, and find ways to help one another while still practicing safe social distancing.

“We’re all in this together,” he said. “I’m just an artist and I don’t even feel like this is my doing, this is the community. Coming together and helping one another even though we’re not physically together. It’s beautiful.”

If you know someone who is creating a positive impact during the COVID-19 quarantine, please send your story tip to rwhitt@unm.edu or mlucer9@unm.edu.